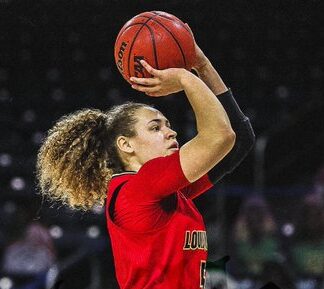 The No. 6 Louisville Cardinals secured another ACC regular season title today in their 78-61 victory over Notre Dame. We also saw the continuation of Dana Evans making her statement for POY as she recorded her 500th career assist.

The Cards got off to a hot start today in South Bend. Dana Evans was in double-digit scoring with 4:27 left in the first quarter, proving further the game against Florida State was not her normal game. She would end the first quarter with 12 points and 3 assists, setting her up for another entertaining game from the senior. Louisville forced 9 Notre Dame turnovers in the first period alone, scoring 11 of their 28 first quarter points off those turnovers. Louisville got their lead early and held onto it through the remainder of the first half. Dana Evans continued doing Dana Evans things, while Liz Dixon would also see herself in double digits early in the second quarter. Mykasa Robinson made her presence known in the second half in a sequence that proved why she is essential to the success of this team. She took a charge, made back-to-back buckets, and followed up with an assist to Kianna Smith. Cards were also playing well defensively, continuing to force Notre Dame to turn the ball over. The Irish would have 16 by the halftime buzzer and Louisville had a 16-point lead.

Things did not slow down much for Louisville in the second half. Hailey Van Lith tallied her first points of the game in the third quarter, shooting two from the line and sinking a three pointer before getting one from the field to add 7 points to the Louisville scoreboard. It would be Mykasa Robinson that made the biggest play of the third quarter when she snatched one away from Notre Dame and ran the court for an assist to Dana Evans. The last ten minutes of play gave Louisville the opportunity to add to their stat lines and continue their strong defensive efforts. They would force 5 more Notre Dame turnovers and tally 10 points in the paint during the fourth quarter. Regardless of her scoreless first half, Hailey Van Lith still finished her day in double-digit scoring, with 10 points. The team was led in scoring by Dana Evans, who had 26 points, followed by Liz Dixon with 12, and Kianna Smith and Mykasa Robinson with 10 points each.

The Cards will be the 1 see in the upcoming ACC tournament, set to begin later this week in Greensboro, North Carolina. They are currently projected as a 3 seed in the NCAA tournament.