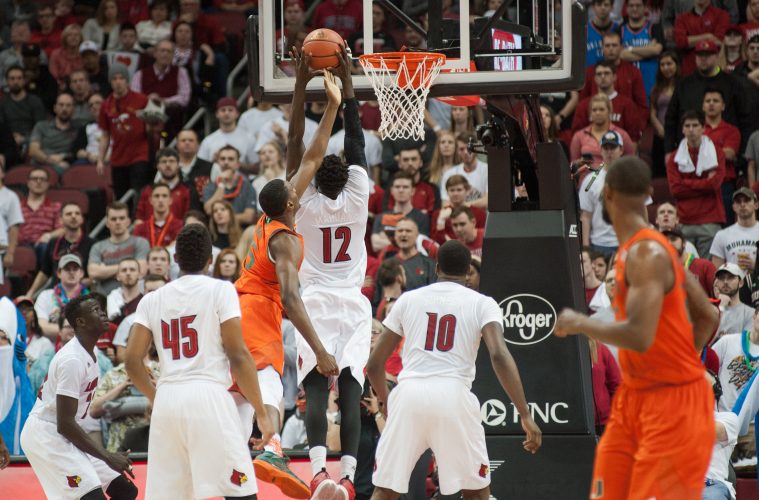 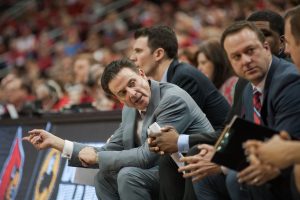 I don’t say this often but the Miami game was a must win victory for Louisville. There are 6 regular season games left for the Cards. Consider the circumstances… guys coming back, the second week of February and CBS deciding to air a bracket preview show on this day.  CBS aired a show of their early prediction brackets.  Mind you, Joe Lunardi has already been giving us early predictions online before, but now they’ve made a show for all of us to tune in to see, analyze and discuss for the coming weeks until the bracket becomes real on Selection Sunday.   Of course, the first show aired after Louisville comes off a loss against Virginia, and prior to a bounce back game vs Miami.

After two made free throws by Mangok Mathieng for the first lead of the game vs Miami, it’s only fitting that Snider come down to drain a long 3 right in front of Coach Pitino and the home crowd with 41 second left on the clock.  Welcome back Mr. Snider!  Quentin Snider is the core of this Louisville team, the captain, and we’re finally seeing him blossom into the player and individual we’d hoped for. Up until his hip flexor injury suffered against Duke, Q Snider had never missed a game. He missed 6 games where the Cards went 4-2.  And then he picked up right where he left off against the Hurricanes.  From CJ, The Louisville native admitted he was rusty at times, particularly on defense, but he still compiled 13 points, four assists and three rebounds after missing the past six games.

Deng Adel also looked good following that game high performance against BC.  From the Courier Journal’s, Tim Sullivan… In the four minutes and 50 seconds Deng Adel was not part of Louisville’s lineup, the Cards allowed 13 points and scored three. In Adel’s 35 minutes and 10 seconds on the floor, Louisville was 15 points better than the visitors.  Donovan Mitchell is U of L’s best player, but Adel is nearly as difficult to replace. He scored 18 points Saturday, grabbed five rebounds, made three assists and committed zero turnovers in a game Louisville would have to dig out from a 14-point deficit. He played like a man determined to turn the page triumphantly, but he admitted to no additional motivation.  He was not playing for validation, though, just victory.  “Obviously, I have to learn from my mistake,” Adel said, seated in front of his locker at the KFC Yum! Center. “But you know, once we started with our first practice (after the suspension), everything was over. It was just back to basketball, hanging out with my teammates. … I’ve moved on. Everybody’s moved on.” 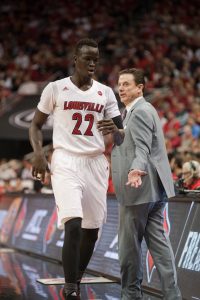 Syracuse has been becoming one of the hotter teams in the ACC conference.  Winning 5 of their last 6, the ‘Cuse are coming off a loss at Pittsburgh but two hot wins’ vs Virginia and FSU in that stretch. Louisville lost to both of those teams and needs to win verses the old conference foe. This should be one for the old Big East fans and something I know Coach Pitino and Boehiem and college basketball fans should always look forward to.