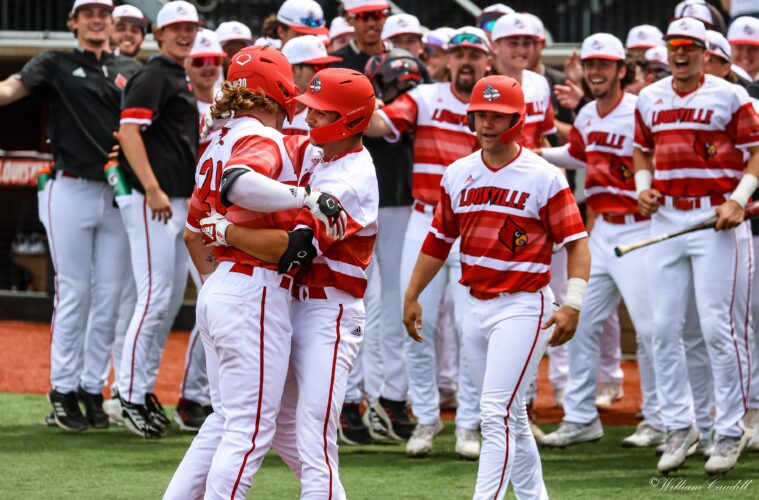 LOUISVILLE, Ky. – The 10th-ranked University of Louisville baseball team plated 11 straight runs on its way to an 11-4 victory over Western Kentucky on Tuesday at Jim Patterson Stadium.

Western Kentucky (13-27) plated the first four runs of the night in the third inning, but it was all the Hilltoppers would get on the night.

The Cardinals immediately responded with a pair of runs in the bottom of the third, getting RBIs from Christian Knapczyk and Ben Metzinger. Jack Payton cut the deficit to one with a run-scoring groundout in the fifth and Ben Bianco knotted the game up at four with a single through the drawn-in infield in the sixth.

While the bullpen was putting zeros up on the board, Levi Usher pushed the Cardinals in front with his fifth home run of the season in the seventh.

The Louisville offense finally broke through in the eighth, putting six more runs on the scoreboard. Metzinger doubled a run in to double UofL’s lead and Payton extended the advantage to four with a two-run single.

Cameron Masterman then launched a three-run homer to put the cap on the night.

Five different Louisville pitchers came out of the bullpen and allowed just one run over 7.1 innings. Kyle Walter, Ben Wiegman, Adam Dowler and Ryan Hawks each turned in scoreless outings. Wiegman (3-0) earned the victory, while Hawks picked up his first career save.

Masterman was 3-for-5 on the night with three RBIs. Knapczyk, Metzinger, Usher and Bianco all tallied a pair of hits.

Louisville wraps up its eight-game homestand this weekend with three games against Clemson. The series gets underway on Friday with first pitch at 6 p.m. ET.