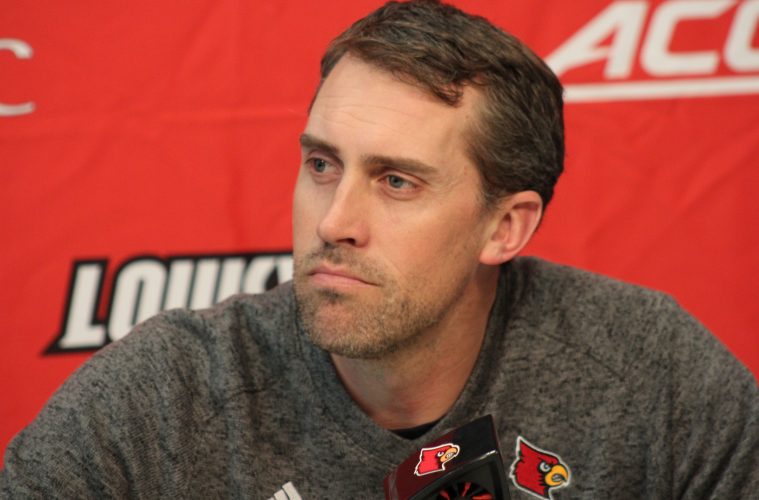 In the University of Louisville’s first football scrimmage last Saturday, first-year defensive coordinator Peter Sirmon wanted to see his players get to the football and tackle – a key component that’s helped the Cardinals sport a top-25 defense over the last seven seasons.

For the most part, Sirmon and head coach Bobby Petrino were pleased with the results in the team’s first major test under the lights at Papa John’s Cardinal Stadium. Both coaches came away pleased with the ability to limit big plays and tackling, which were a cause for concern last season.

As the schedule inches closer to the Sept. 2 opener against Purdue, Sirmon has a new set of goals for the next major scrimmage on Saturday morning.

“Last week, we wanted to improve effort and tackling,” Sirmon said. “This week’s focus has been effort and details. We need to perform the finer points of execution.

“I think tackling starts with effort. For us, it’s not one on one tackling, it’s team tackling. There’s one ball and 11 of us. Therefore, we’re all on the hook getting the guy down. We have to understand leverage and where the sideline and our help is.”

As the third week of fall camp comes to a close, the Cardinals are ready for a change – a break from the same routine, the intense heat, and hitting the same teammates over and over.

“We have been at the point for a while now,” senior defensive tackle Drew Bailey said of facing his teammates in practice. “We are tired of going against the same guy. We are ready for something new. It’s like watching the same episode over and over again.”

With the loss of DeAngelo Brown to the Tennessee Titans, the mammoth run stopper from a year ago, senior defensive tackle De’Asian Richardson is ready to step in and fill that role.

Sirmon also understands to be an effective defense, Richardson must play well at the point of attack and stop the run.

“De’Asian has done a good job holding the point,” Sirmon said. “He’s a big, physical player. He has a lot of experience and he is a versatile player, who we can move around. I’ve been very pleased with De’Asian and Drew Bailey.”

With an explosive offense leading the way, the defense is loaded with veterans, an essential component of a national title contender.

“Experienced players are invaluable,” Sirmon said. “That’s the way programs grow and programs transition. It’s guys who have done it the right way and have trained the young guys. That’s what a healthy program is.”