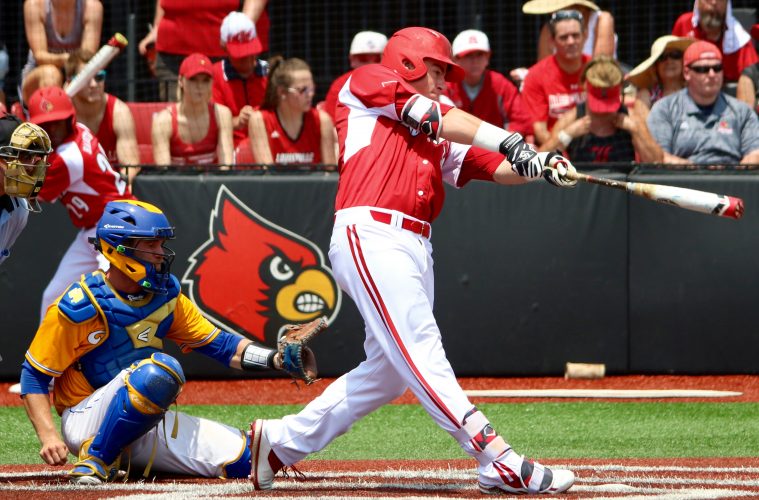 All-American Brendan McKay matched a school record with four home runs and finished with a career-best nine RBI to lead the No. 2 Louisville baseball team to a 14-4 road victory against Eastern Kentucky on Tuesday afternoon at Earle Combs Stadium.

The four home runs for McKay equaled the school record total first achieved by Jim LaFountain against Western Kentucky on April 24, 1976. Tuesday’s performance by the junior two-way standout marked the most home runs by an NCAA Division I player this season, while the nine RBI equaled the third highest total in the nation.

McKay’s 4-for-5 day at the plate included a two-run homer in the first inning, a two-run bomb in the second inning, a three-run homer in the fourth and another two-run shot in the ninth inning as the Cardinals (34-6) hit six home runs overall, their highest total in a single game since 2009 (May 5 vs. Ohio State). The nine RBI for McKay were the most for a Louisville player since Chris Dominguez drove in nine runs and connected for three home runs in a win over Milwaukee on May 6, 2009. With Tuesday’s performance, McKay lifted his batting average to .405, his on-base percentage to .530 and his slugging percentage to .746 to go along with 11 home runs and 39 RBI in 38 starts this season.

“When a player is having a day like the one Brendan had today, you just want to make sure you appreciate it because those performances are not a common occurrence,” said Louisville head coach Dan McDonnell. “Brendan is a special player and when he’s at his best, he can make the game look so easy, at the plate and on the mound, and that’s a rare combination in a player at this level.”

Joining McKay on the home run train was Drew Ellis, who was 3-for-5 with a solo homer and a double, while Devin Mann finished 2-for-4 with a solo blast and scored twice. Devin Hairston added two hits with one RBI and scored four runs as Louisville out-hit the Colonels 14-6 in the game.

On the mound, freshman Shay Smiddy was victorious in his first collegiate start as the righthander surrendered three runs on three hits with three strikeouts in a career-long 5.0+ innings to move to 1-0 on the season. Freshman lefty Adam Elliott had a career-high six strikeouts while allowing his first run of the season (19.1 innings) on two hits in three innings of relief. Junior righty Chandler Dale worked a scoreless ninth inning to close the win.

McKay gave the Cardinals a first inning lead when he connected for a two-out, two-run homer against EKU starter Bubba Carter. After Hairston extended the inning with a two-out single through the left side, McKay launched a 3-1 offering high into the air and over the wall in right center for his eighth home run of the season.

Louisville added to the lead in the second inning plating five runs on five hits, highlighted by another two-run homer from McKay. Logan Taylor started the scoring with a two-run single to left field to plate Mann and Josh Stowers before being driven home on a RBI single to left by Hairston. McKay followed by crushing another 3-1 pitch from Carter sending it into the trees beyond the right field wall for his ninth home run of the season and a 7-0 advantage.

The Colonels broke through for their first run of the afternoon in the third inning when Cornell Nixon connected for a two-out RBI double down the left field line to score Ryland Kerr. Louisville answered in the fourth as McKay delivered his third home run of the game connecting for a three-run shot for a 10-1 lead. After a two-out walk by Colby Fitch and a fielding error by the Colonels on a bouncer off the bat of Hairston, McKay pulverized a 2-2 offering from Alex Hamilton drilling it over the center field wall for his 10th homer of the season.

EKU continued to battle in the sixth inning scoring three runs on three hits to cut the margin to 10-4. Alex Holderbach drove Nixon home with a RBI double to right center for the first run of the inning. Logan Starnes added a two-out, two-run single to right field to score Shea Sullivan and Holderbach.

The Cardinals added to the lead when Mann opened the eighth inning by driving the first pitch from Byran Quillens over the wall in left center for his fifth home run of the season and an 11-4 lead. Louisville capped the scoring with three runs in the ninth on back-to-back home runs by McKay and Ellis. McKay sent a 1-0 pitch from Caleb Johnson over the center field wall for a two-run homer and his 21st career four-bagger. Ellis followed by sending a 2-2 pitch out of the ballpark in right center for his 10th home run.

Tuesday marked the first back-to-back home runs for Louisville since Will Smith and Nick Solak accomplished the feat against Wake Forest on May 25, 2016 at the ACC Championship in Durham, N.C.