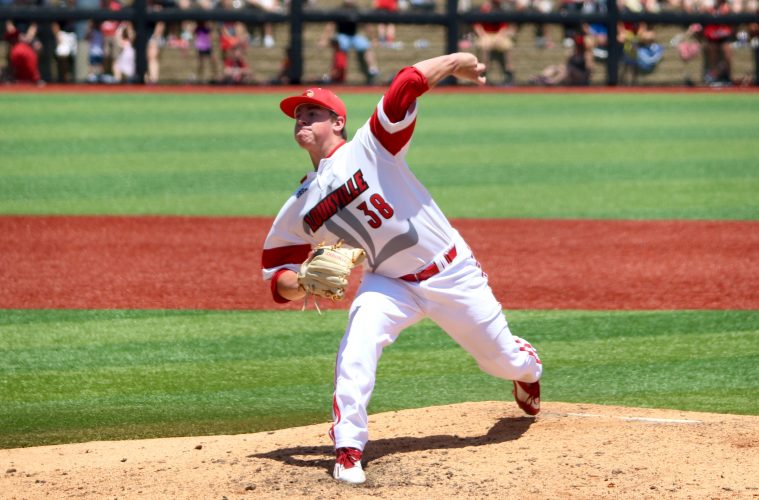 Brendan McKay allowed just one hit in eight dominant innings on the mound and added pair of hits at the plate to lead the No. 2 Louisville baseball team to a 3-0 victory over Georgia Tech in Thursday night’s series-opener at Russ Chandler Stadium.

McKay finished with eight strikeouts while surrendering only a fourth inning single to go with two walks to move to 5-2 on the season and 26-9 in his collegiate career. The junior lefthander retired the final 13 batters he faced while reaching eight strikeouts in a game for the 24th time. McKay, who ranks second in career strikeouts at Louisville with 321, has a 1.19 ERA and 76 strikeouts in his 53.0 innings this season. Along with the impressive work as a pitcher, McKay finished 2-for-4 as a hitter to raise his average on the season to .404 overall.

Following the eight strong innings by McKay, junior righthander Lincoln Henzman twirled a scoreless ninth inning to earn his 10th save of the season and complete the seventh shutout for the Cardinals (29-4, 13-3 ACC). Henzman has a 1.77 ERA with 19 strikeouts in 13 appearances and 20.1 innings of work this season. Thursday’s game marked the third time this season Louisville has limited an opponent to only one hit.

Devin Hairston delivered his third straight multi-hit game finishing 3-for-4 with a run scored as the Cardinals finished with a 10-1 advantage in hits against the Yellow Jackets (16-16, 4-12). Drew Ellis and Colby Fitch added RBI singles for Louisville, while Devin Mann singled, scored once and chipped in with a stolen base.

The Cardinals opened the scoring with a pair of runs in third inning against Georgia Tech starter Ben Schniederjans. Fitch delivered the first run with a RBI single to right field to score Mann, who singled and took second on a single by Logan Taylor earlier in the inning. Taylor, who went from first to third on the single by Fitch, scored the second run of the inning on a wild pitch.

Louisville extended the lead to 3-0 in the fifth inning when Hairston scored from third on a RBI single by Drew Ellis. Hairston started the inning with a single to center and advanced to third on a single to right by McKay.

The No. 2 Cardinals and Yellow Jackets will continue the series Friday at 6 p.m., ET, while the weekend finale is set for Saturday at 1 p.m.