Breaking Down The Two Will Gardner Fumbles Against Miami

Will Gardner’s debut at Papa Johns Cardinal Stadium drawn a few mixed reviews from some. Overall his Head Coach was happy with Sophomore, noting that he did well commending the offense, in his 205 yard, 2 TD, 20 for 28 performance. The biggest downfall with Will Gardner on Monday night were the two sack/fumbles he had, both times within the opponents 10 yard line. In this post, we’ll break those down. 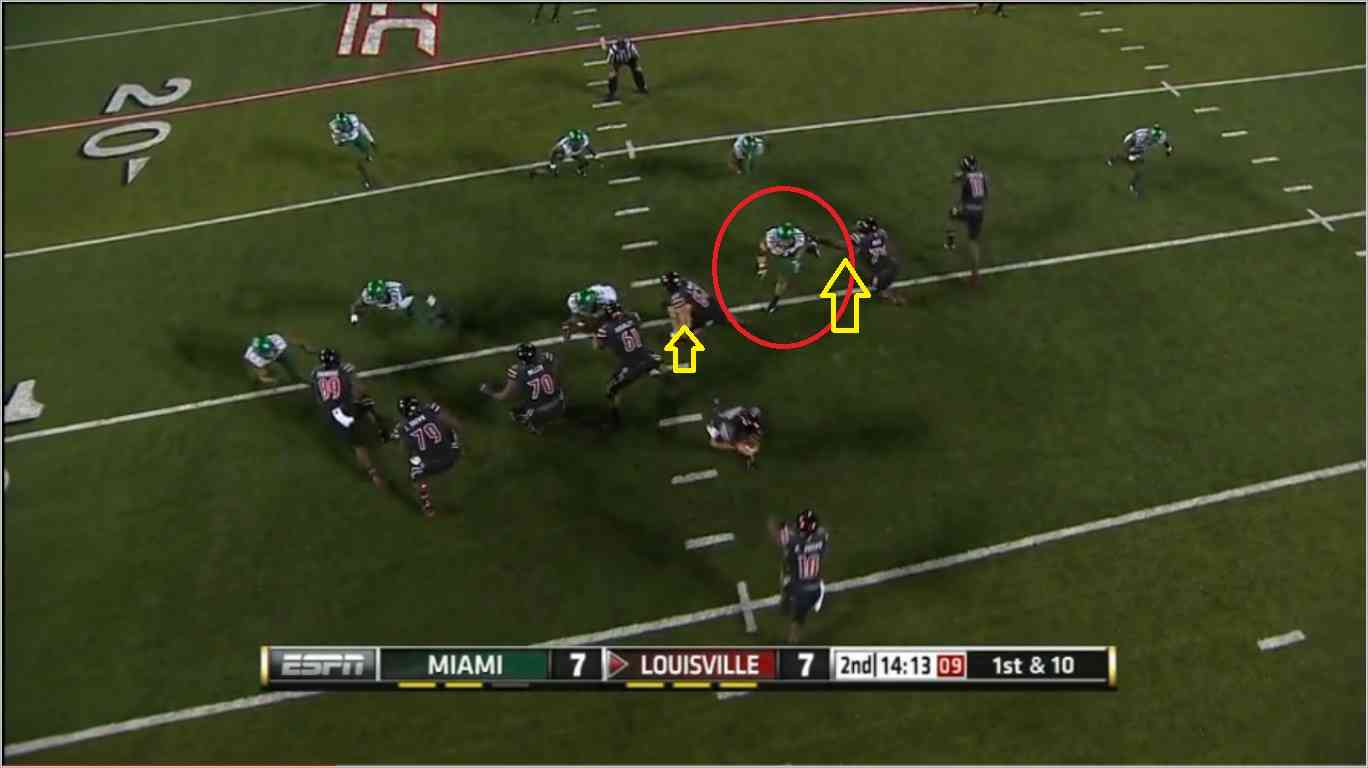 At this very moment, assuming Miami maintained good coverage, there is only one good result that this play can end in. A hand-off to the left side for Dominique Brown, obviously that doesn’t happen or it wouldn’t be here.  Instead a Miami defensive lineman goes unblocked (circled above in red), this is either caused by a missed assignment by Jake Smith or a missed assignment by Ryan Mack. I’d lean toward the latter, considering the reaching Ryan Mack. He has to be quicker to get to the spot, but he won’t be the only blame on this play. As you’ll see below, this lineman that essentially went untouched through the Louisville offensive lineman will be the first one to make contact on Will Gardner forcing the eventual fumble. 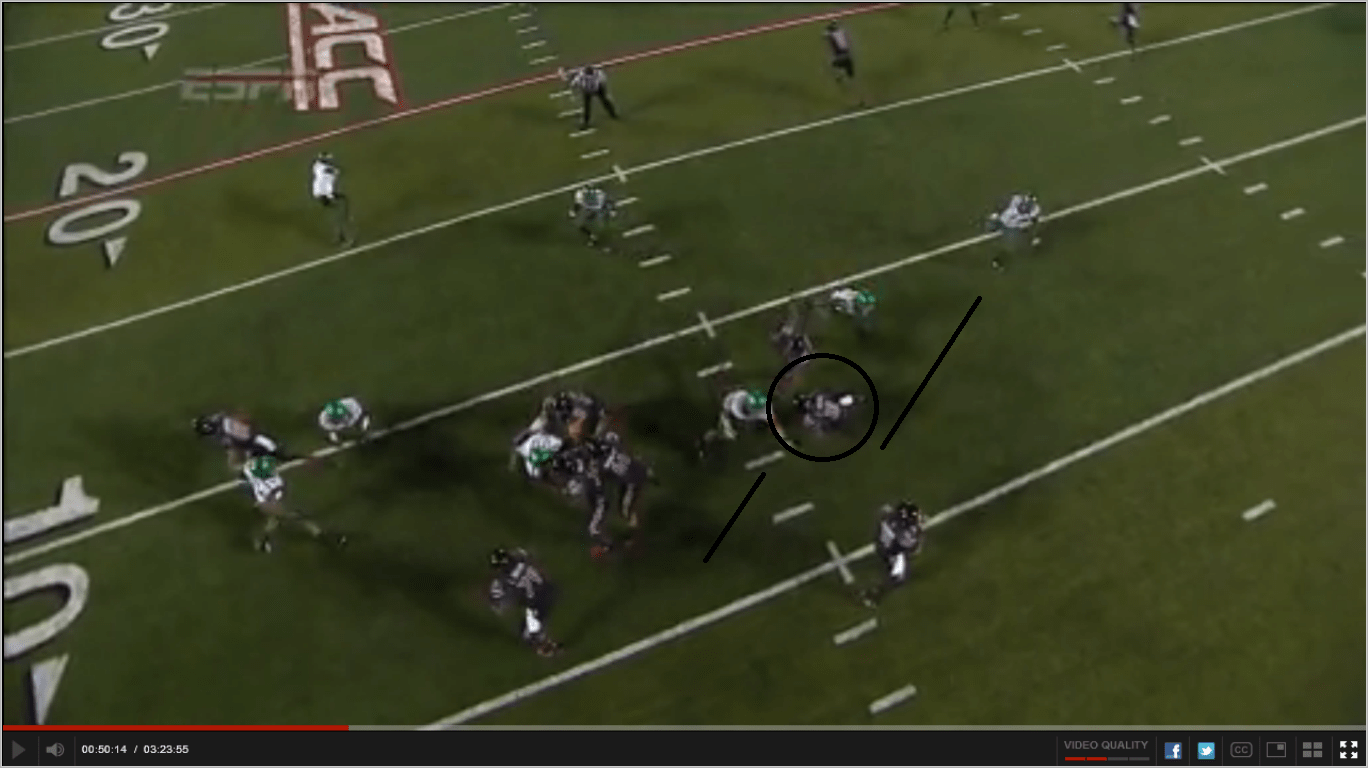 This is probably a better view of what occurred here. Miami brought pressure, bringing six men on a stunt rush. The Louisville coaching staff nor Will Gardner were able to pick that up pre-snap. Dominique Brown’s (circled above) last ditch effort wasn’t enough to get in front of the initial rush 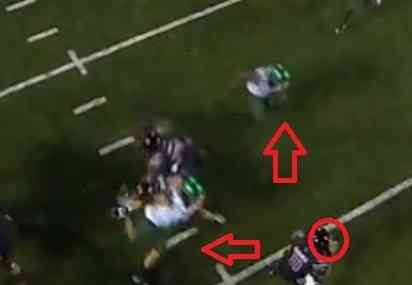 It’s tough to place much blame on Will Gardner. He’s doing mostly all the right things, he his a strong presence in the pocket and his eyes are remaining down field. The one thing this image shows is that Will Gardner still has a little work left to improve his pocket awareness. His eyes are looking down field so he may not see the two defenders that are converging on him but he’s got to feel them. When he does feel them, he’s got to get the ball closer to his body and brace for the impact that’s coming. That’s difficult for NFL quarterbacks to do. So I’ll keep him off the hook here. 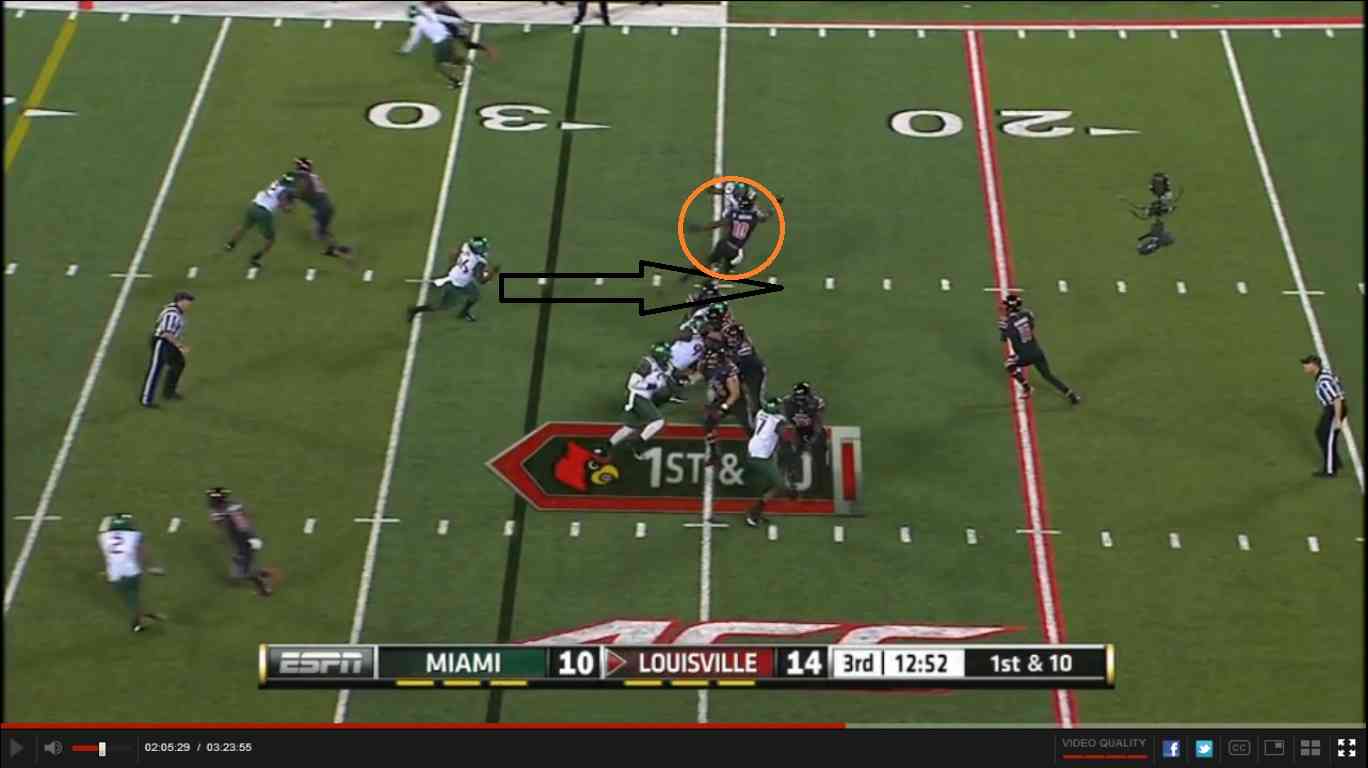 This fumble was more about Will Gardner than the offensive line. Louisville actually reversed the side Dominique Brown was on pre-snap. Dominique Brown made a choice to fit the block on Miami’s Defensive End, Miami blitzed a middle LB and Louisville didn’t have men present to block. With that being said, Will Gardner had plenty of time to make a decision. He has to either get rid of the ball, hit Eli Rogers who appears to running into open space at the bottom of the picture or just take the sack without fumbling. He did none of that.

As you can see, Gardner is way too careless with the ball here with two defensive lineman running after him. You have to be stronger with the ball when your expecting contact. It has to be higher up and closer to the body, away from the Hurricane players who are trailing and doing anything to force the turnover. Gardner acknowledged that afterward. Like the previous play though, Will Gardner keeps his eyes downfield displaying a good trademark in a QB. He had a wide open sideline to throw the ball away, leaving him an option to get rid of the ball. He must be smarter and more poised knowing that getting rid of the ball is worse than the sack and certainly worse than fumbling.  This may have been instance where he was trying too hard.

What does this all mean?

The good thing about these problems is that they’re fixable. The Will Gardner ball security issue will promptly be fixed, it’s a simple ONE.  It comes with taking more hits and getting a few games under his belt. Bobby Petrino will probably be able to accelerate that process. He pointed out in the post-game that Will Gardner hadn’t been hit in nearly three years, and the young QB was shaking some of the rust off.

I wouldn’t be too concerned about the offensive line . It’s an entirely new offensive scheme with an experienced group. Louisville has the talent – at least in the starters of the offensive line – to have a great front. I would think it’s a possibility you’ll see Jake Smith move back to center to help sure up both sides but we will have to wait and see until Saturday vs. Murray State in what figures to be a dress rehearsal for a tougher than expected Virginia team.