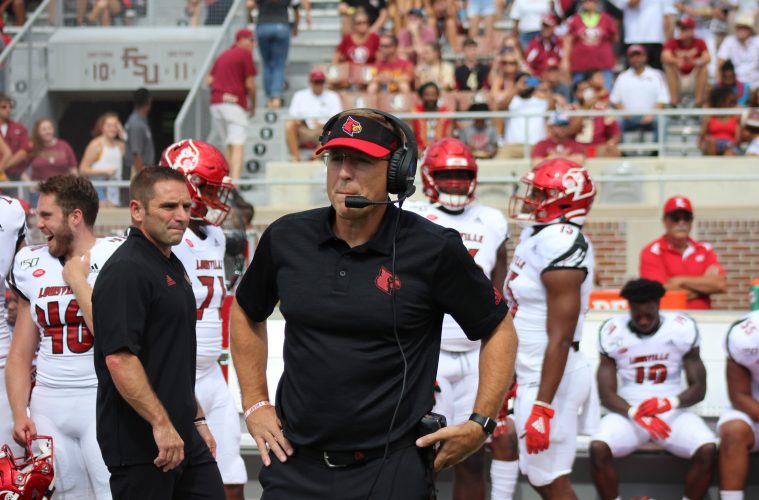 Louisville Head Coach Scott Satterfield has been named ACC Coach of the Year for the 2019 season. The honor comes off a 7-5 first season as the Cardinals head coach and is well-deserved after a turnaround following a 2-10 season in 2018. The ACC Coach of the Year was announced on the ACC Network’s Packer & Durham.

University of Louisville head football coach Scott Satterfield has been selected the 2019 Atlantic Coast Conference Football Coach of the Year, the league announced on Thursday.

Satterfield, who becomes the first Louisville football coach to earn ACC Coach of the Year honors, led the way in balloting among a select panel of 46 media members and the league’s 14 head coaches.

“I’m certainly thankful and honored to be recognized as the coach of the year in the ACC, especially in the conference I grew up watching as a kid,” Satterfield said. “I’m proud of my coaching staff who worked so hard to change the culture of this program and put our players in a position to succeed. “

“Lastly, I’m grateful to be able to coach a great group of players who worked so hard since we arrived here last year, and bought into what we are trying to do here at the University of Louisville.  I’m so excited to lead this program into the postseason in a few weeks.”

After an impressive six-year run as the head coach at Appalachian State, which included three-straight Sun Belt Conference championships, Satterfield took over a UofL program that went 2-10 overall and 0-8 in the ACC in 2018.

Satterfield guided the Cardinals to one of the more impressive turnarounds in league history, becoming only the second school in the ACC to go 0-8 in league play the previous year to improve to 5-3 the following year. The five-game improvement also was the best among Power 5 programs this season.

Entering the year, the Cardinals were not only picked to repeat their seventh-place at the 2019 ACC Football Kickoff, they placed 209 points out of sixth place in the media’s preseason poll.

The Cardinals snapped a nine-game conference losing streak with a 41-39 win over Boston College at Cardinal Stadium on Oct. 5.

Competing against one of the nation’s most difficult schedules, the Cardinals played three ranked teams this year, including two in the top 10 in No. 9 Notre Dame and No. 3 Clemson.

The Cardinals snapped a 10-game losing streak against ranked opponents with a 62-59 win over No. 19 Wake Forest on Oct. 12. It was Louisville’s first road win over a ranked opponent since a 38-35 win at West Virginia in 2011.

The native of Durham, N.C., revamped the Louisville offense that featured a 1,000-yard rusher and receiver for the third time in school history. Running back Javian Hawkins has rushed for 1,420 yards this season, which ranks second in the league, and wide receiver Tutu Atwell is tops in the conference with 1,129 yards and 12 touchdowns.

Finishing near the bottom of the national statistics last season, the Cardinals improved to 38th in the nation in total offense (442.1 ypg.) 24th in rushing offense (214.1 ypg.) and 43rd in scoring (32.7 ppg.). Louisville scored over 30 points six times and rushed for over 300 yards in a pair of contests this season, including 370 in a win over Syracuse on Nov. 23.

Satterfield is one of six coaches in NCAA history to win coach of the year honors at one school the previous year and follow it up with a second consecutive award at a different school the following year. Jim McElwain of Florida was the last coach to do it in 2014 and 2015.