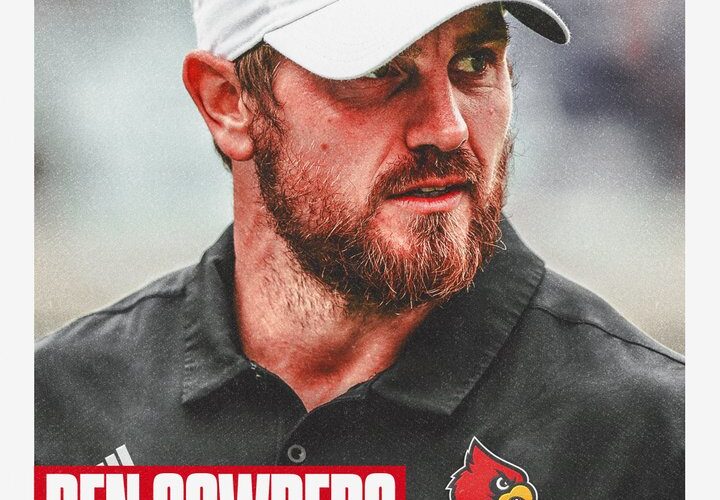 University of Louisville head coach Scott Satterfield announced the hiring of Ben Sowders as the Director of Strength and Conditioning on Friday.

“Ben is considered one of the top young strength and conditioning coaches in the nation,” Satterfield said. “It’s easy from watching Georgia compete this season that Ben has had a major impact on the physicalness and development on the Bulldog players, who are competing for the College Football National Championship. Ben brings the knowledge and experience that can elevate our football program.”

Sowders joins the Louisville after four seasons at Georgia as the assistant director, where he helped lead the Bulldogs to the national title game this past season and also guided UGA to three trips to the Southeastern Conference Championship game.

During his time with the Bulldogs, he has worked personally with 20 players who played in the National Football League, including 15 who are currently on NFL rosters.

Before joining the staff at Georgia, Sowders spent one season as director of strength and conditioning at McNeese State.

Prior to the 2017 season, he spent two years on the strength and conditioning staff at Georgia Tech and two years as the director of strength & conditioning at Gardner-Webb, where he was responsible for the training of the Runnin’ Bulldogs’ 21 Division I programs.

Before his time at Southern Miss, he completed a six-month internship at Alabama, working with the Crimson Tide football program, while also sharing time with the volleyball, tennis, and rowing teams at Alabama.

His first job in the profession came as a facility coordinator and head strength & speed coach with D1 Sports Training in Nashville, Tenn., where he worked with a handful of notable NFL players, including Steve Smith, Jerome Bettis, Donovan McNabb, and Kyle Vanden Bosch.

He earned his bachelor’s degree in exercise science in December 2008 from Western Kentucky, where he was a linebacker for the Hilltoppers. He entered the program as a walk-on, but he later earned a scholarship and completed his playing career as a two-year starter. As a starter in 2008, Sowders recorded 47 tackles and 2.5 tackles for loss for the Hilltoppers and added 29 tackles and 3.0 tackles for loss in 2007.

He received his master’s degree in recreation and sport administration in August of 2010 from WKU.

Sowders, who is married to Shelbee Rodgers, is a Collegiate Strength and Conditioning Coaches Association (CSCCa) and is also certified by USA Weightlifting.