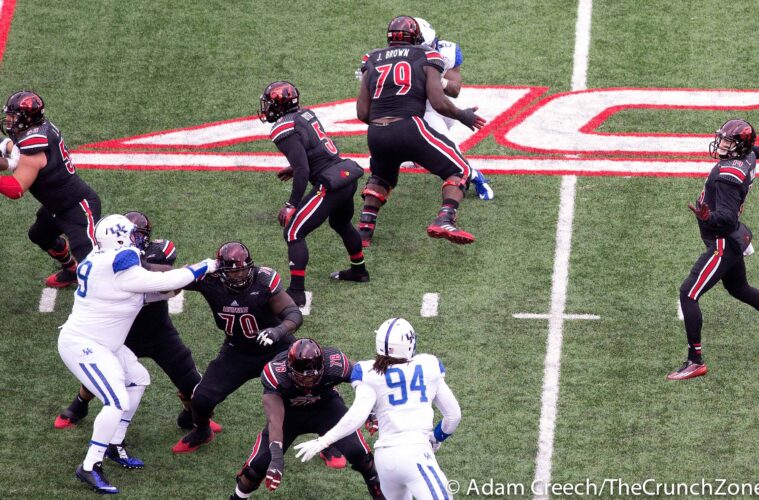 As we approach the 2017 college football national signing day, Louisville has made it a focus to bolster an offensive line losing 3 and potentially 4 starters (Hughley, Hunter, Mahoni, and possibly McNeil). Bobby Petrino and staff are after early impact guys who will infuse the line with added talent and depth. Dave Lackford (@Rivals_DLack) and I (@cpersonTCZ) break down those linemen who are committed as well as a few prospects that Louisville is still aggressively pursuing.

Dave’s Evaluation: Cole is one of my favorite kids in this class.  He actually played tight end for Belfry.  They run a spread wing-t offense which likes to attack the edges of the defenses they face.  It makes sense that he plays there because he is their most dominant blocker and exceptionally athletic for a mauler his size. What I like the most about his game is how freaking nasty he plays.  He gets tot he second level fast and engages with violence on arrival.  Turn on his film and you will see if he isn’t pancaking his man, he’s got him locked up in the pads and driving him laterally until the whistle blows.  Bentley told me he is up to 315 pounds.  That tells me he still has the ability to put some more muscle on his frame. This is good because he will need it playing guard at the P5 level.  The only real knock on him, if you can call it that,  is he plays in an offense that runs the ball 90% of the time and there isn’t much film on him in pass protection.

Chris’ Evaluation: Physical. Aggressive. Dominant. These are a few of the words that come to mind when watching Cole’s highlight reel. While there is limited footage of him in pass protection and at guard, Bentley displays the ability to move well in space and demolish those in his path. One of the most interesting characteristics of his game is his relentless nature, continuing to drive defenders completely out of the play even after the play is over. During his high school career Bentley has been asked to play a TE/tackle type role, which demonstrates his level of versatility, since he is a 315lbs freight train.

Dave’s Evaluation: It’s hard to evaluate an offensive lineman based on Hudl film and even camp one on ones.  This is why, on hudl the player will only place clips of him executing well.  In one on one’s, you only see the player matched up against a defensive player in a situation where he’s protecting a stationary tackling dummy with no shifting to diagnose.  That being said, I want to see a player absolutely dominate his opponent in one on ones as well as destroy people, get to the second level, and execute advanced blocking assignments on his hudl video.  Rudd looked adequate in pass protection but seemed a little mechanical to me in his movement and footwork.  What I did notice however is once he got his hands on his man, his man stopped moving completely.  That’s a big check in the positive box because stonewalling a pass rusher is obviously a big deal.  That being said, the pass rushers he stymied didn’t look very explosive.  There were a few clips where he had to pick up speedy blitzers coming from the second level which showed good awareness and body positioning.  In the run game he looked adequate but didn’t really maul anyone and wasn’t really a downhill second level guy.  Overall I think Rudd looks like the part of a lineman with the potential to be dominant but he will have to work on his hip fluidity and foot speed at the next level before he can be trusted in the ACC.

Chris’ Evaluation: Ronald Rudd is one large human being, which is really nice because he stands out on film quite well. But more than just size, Rudd is a disciplined and effective pass blocker that shows great flexibility. He is quick enough to keep edge rushers in front of him and strong enough to prevent bull rushes. Since there is very limited footage of him run blocking, I can’t effectively judge his ability there. One area for Rudd to potentially improve would be his punch in order to better defend bigger, faster defensive lineman at the D1 level. Overall, though, Rudd comes to Louisville with the size, skill, and experience to contribute immediately and should factor into discussion for a starting spot.

Dave’s Evaluation: Beast.  If Louisville can land Chandler and Suggs to complement road graders like Bentley and Poutasi this would be one of the best offensive line classes the ‘Cards have pulled.  Chandler is dog, a big one, and he’s extremely vicious.  I like him the best out of all eight prospects mentioned here.  His pad level is elite, he fires off the line like someone shot him in the ass with a rocket, his footwork and reach is next level, he keeps his hands inside his man, and finishes blocks with indiscriminate violence.  Other things I notice were how he doesn’t blow assignments in a sophisticated running attack.  He also has a good stance when his uniform is filthy.  That tells me as the game goes on he doesn’t get undisciplined and slack off, sacrificing fundamentals and technique.  Chandler would be a huge pull for this class and should be the top target on Louisville’s board at this point.

Chris’ Evaluation: Caleb Chandler is the highest rated of all uncommitted lineman as well as all recruits Louisville is heavily involved with and it shows with how well rounded of a prospect he is. Chandler has the athleticism to consistently get to the 2nd level and finish blocks, the strength to move d-lineman and open up run lanes, and the flexibility to win 1 on 1 battles with defenders by getting low and using leverage. Whether it’s moving a defensive tackle or in pass protection on the outside with a speed rusher, Chandler squares his shoulders and engages defenders with precision. Like most linemen, Chandler could use a little work in the weight room to put on some weight, but besides that Chandler has everything you could ask for in an offensive line prospect and shows that he would be able to contribute early and often.

Dave’s Evaluation: Tucker has the mean streak, motor, and size you want in a left tackle.  His allure is definitely in his athleticism and size.  His technique leaves something to be desired however, as he tends to rely on his brute strength to overpower smaller guys.  At the next level he will have to work on his pad level without losing his explosive first step, which really stood out to me.  That being said, Tucker is a mean dude and would bring an attitude of toughness and size to this class that should be valued highly.

Chris’ Evaluation: Tucker is an absolute monster. He is huge and he is incredibly strong. This strength is most evident as he has the ability to discard an opposing d-lineman or linebacker with merely one arm. As Bobby Petrino asks his linemen to be very mobile, what surprised me most was just how mobile Tucker was for someone his size. It is always difficult for linemen to make an impact as freshman in college, but if anyone was physically ready to contribute in his first year, Tucker would be that guy.

Dave’s Evaluation: Bateman an Alabama kid and those guys live for football.  He’s a straight dog in the running game and his tenacity is evident on film.  One thing he needs to work on is sliding more fluently in pass pro at the next level against quicker edge rushers that will look to neutralize his size advantage.  That being said, he shows great instincts and what he lacks in technique right now can be made up for in sheer size and power.  I really like this kid and if you see him in person don’t tell him I said he needs to work on technique because I have kids to raise.

Chris’ Evaluation: Bateman is big, athletic, and incredibly strong. That sounds awfully familiar. This is obviously what Bobby Petrino is looking for when trying to add another lineman to the class. For his height, Bateman seems to have room to add some additional weight but even at his current weight, could be a factor from day one. Bateman uses his hands well both in run blocking and pass protection, knocking a defender off of the ball with ease. When looking at the type of lineman Bateman could be in the future, his ability to move and his footwork really stand out and show just how high of a ceiling he has.

Dave’s Evaluation: Becton is the type of person who can scratch his knee without bending or even dipping his shoulder.  That means he has long arms.  Long arms are essential to being an elite tackle.  I checked that box right from the jump, if you don’t believe me just look at him in his stance.  I honestly cut his film off at 2:24 because I had seen enough.  On the last play I watched, the offense throws a screen pass from the opponents 35.  Becton blocks down on what appears to be a DT in a three-technique (lined up on the outside shoulder of the guard) shoves him down and pops back up to take on the linebacker who freezes.  His quarterback completes the pass and the receiver gets stood up near the goal line.  After a scrum develops, Becton appears on screen 35 yards downfield, shoves the pile, and pushed his receiver into the end zone for a touchdown. Becton is a dog with a motor, solid technique, strength, fluid movement, and good awareness. If Louisville can land Becton he may very well be the jewel of this class.

Chris’ Evaluation: Mekhi Becton is about as big as offensive lineman come. He is dominant, aggressive, and relentless. One thing I like most about his game is that he does not stop until the whistle blows. This shows a personality that can make an offensive lineman very intimidating. Becton is the epitome of an offensive lineman from a physical standpoint. It’s obvious on film that he is much bigger and stronger than any of his competition, therefore giving him an immediate advantage. Another aspect that stands out to me about Becton is the length of his arms which is a HUGE asset for offensive tackles to possess. When he gets to college he will likely go through a period most offensive lineman go through, converting extra weight to lean muscle and adding strength while polishing up technique. After he does this Becton should become a force on the offensive line, which is why he is so highly sought after.