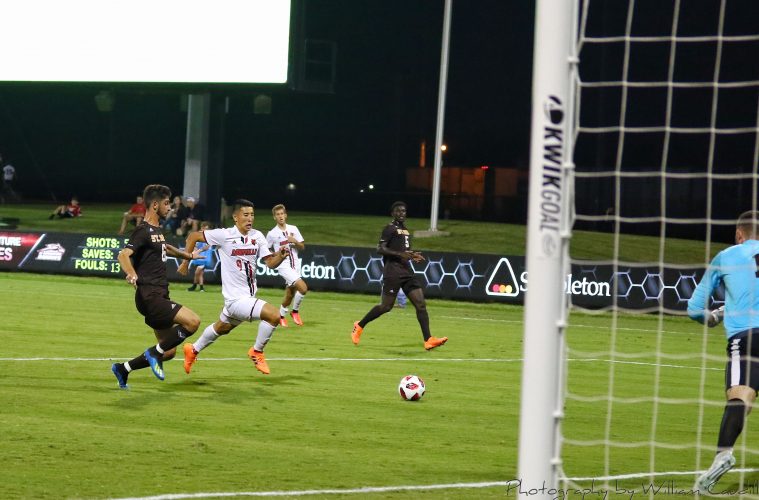 #7 Louisville takes down #2 Duke at Lynn

LOUISVILLE, Ky. – The No. 7 University of Louisville men’s soccer team scored a trio of second half goals and captured a 3-0 victory against No. 2 Duke in Sunday afternoon’s ACC opener at Dr. Mark and Cindy Lynn Stadium.

Winning their fifth conference opener in the last seven seasons, the Cardinals moved to 3-1-0 overall in 2018 as Adam Wilson, Ziyad Fekri and Elijah Amo each scored goals for the home side. Louisville also earned its fourth straight win against the Blue Devils (3-1-0, 0-1-0 ACC), who have been outscored 8-0 in their only two visits to Lynn Stadium.

Wilson connected on the first goal of the match and added an assist, while Tate Schmitt chipped in with two assists for the Cardinals, who moved to 11-7-4 against ranked foes in their five seasons at Lynn Stadium. Jake Gelnovatch needed just one save while the Cardinals added a team save in clinching their second shutout of the season.

After the teams played to a scoreless opening 45 minutes, the Cardinals struck for the first goal of the match in the 53rd minute when Wilson tucked a left-footed strike inside the upper left corner from 22 yards away. Cody Cochran started the chance with a long centering pass into the attacking third for the Cardinals, where Schmitt won the ball in the air. Schmitt directed the ball to Kino Ryosuke, who found Wilson with a well-placed touch in space along the right side of the field. Wilson curled his shot around a defender and into the net for his ninth collegiate goal, including the second for Louisville.

The advantage increased to 2-0 a little more than 25 minutes later when Fekri scored on a header off a corner kick in the 78th minute. Wilson delivered a well-placed ball on the backside of the box, where Fekri finished inside the right post for his first goal of the season and the second of his collegiate career.

Louisville added its final tally of the match in the 82nd minute after Amo completed a breakaway up the center of the field by scoring inside the far right post from 14 yards for his first collegiate goal. Schmitt earned his second assist of the season after his centering pass found Amo in stride.

Up next, the No. 7 Cardinals continue their ACC gauntlet with a visit to Boston College on Friday at 7 p.m., ET.