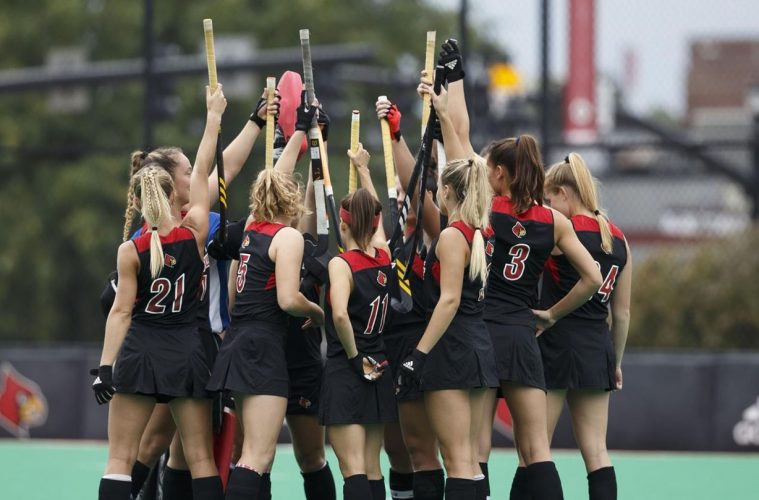 The sixth-ranked University of Louisville field hockey team has earned the overall No. 4 seed in the NCAA Championship and Trager Stadium and will serve as the host site for the first and second rounds Friday and Sunday.

Sunday’s quarterfinal winner will advance to the NCAA semifinals which will take place Nov. 22 at Wake Forest’s Kentner Stadium in Winston-Salem, N.C. The national championship game will be held on Nov. 24.

This marks Louisville’s eighth NCAA tournament appearance and its fifth at-large bid in the last six years. The Cardinals (15-5, 3-3 ACC) advanced to the semifinals of the ACC Championship where they fell 3-1 to top-ranked North Carolina.

“Just to make the NCAA tournament is not easy, and we missed out last year, so that was our first goal this year, to get back to the tournament,” said UofL head coach Justine Sowry. “As the season went on, we kept building and got some big wins. It was a tight race this year. We’re excited to be in, but to be the first team in our program that has hosted here at Louisville is really exciting for our program. But the work starts tomorrow morning when we get up. Michigan is an incredible opponent and we’ve had difficulty with them in the past. We’ve set ourselves up well and now it’s back to the drawing board and hopefully we can advance past the next round.”

While Louisville has served as a host site for six NCAA Division I Field Hockey National Championships, this marks the first time the Cardinals have played at home in the first round of NCAA post season.

“We are ecstatic,” said junior midfielder and all-ACC second team selection Alli Bitting. “We thought it might be a possibility, but then seeing it up there was a testament to all the hard work we put in this season, to go from not even making the NCAA tournament last year to now being a host site is truly incredible. I’m so excited for the opportunity.”

The Rest of the Field
Tenth-ranked Michigan received an at-large bid to the tournament after posting a 13-6 record. The Wolverines recently fell to Big Ten tournament runner-up Penn State in the quarterfinals of the conference tournament. This marks Michigan’s 16th appearance in the NCAA tournament.

The Wolverines lead the all-time series with Louisville 9-3 and won the most recent meeting 6-2 on October 22, 2017 in Ann Arbor.

Ninth-ranked Boston College (13-7) earned an at-large bid following a runner-up showing in the ACC Championship. The Eagles most recently fell 3-1 to top-ranked North Carolina in Sunday’s title match. BC is making its 12th NCAA tournament appearance and its first since the 2016 season.

No. 14 Northwestern (14-7) earned an at-large bid after reaching the semifinals of the Big Ten Championship where the Wildcats fell 2-1 to eventual champion Iowa. NU is making its 15th NCAA appearance, and first since 2017 when the Wildcats edged Louisville 3-2 in overtime in the first round at the University of Michigan.

Louisville Quick Hits
• UofL (15-5, 3-3 ACC) is coming of a semifinal showing at the 2019 ACC Championship. The Cards defeated Syracuse 1-0 in the first round before falling 3-1 to eventual champion, top-ranked North Carolina.
• Alli Bitting and Mercedes Pastor were named to the ACC All-Tournament team.
• Four Louisville players earn All-ACC honor: Mercedes Pastor was selected to the first team while Carter Ayars, Alli Bitting and Bethany Russ were named to the second team.
• The Cards have outscored their opponents 46-24 this season with 12 different players recording at least one goal.
• Bethany Russ leads the team with 10 goals and 25 points. The senior forward notched her first career hat trick in the 5-0 win over Indiana and scored a pair of goals in the 4-2 victory against Kent State.