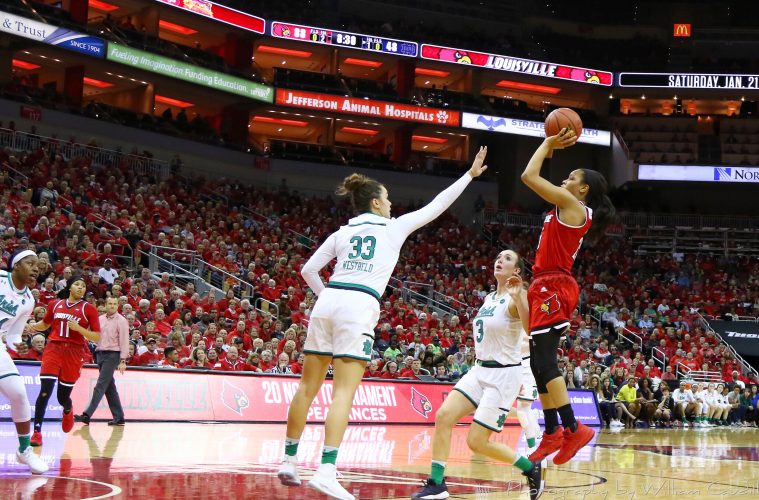 What a night…. what a night. A night of nites.  Nite-nite, if you will.

After two consecutive showings where its defense would let off the gas in the second halves, that would not be the case in the national prime time spotlight as the Cards women’s basketball welcomed then the #2 Notre Dame fighting Irish to undefeated Louisville.

”You’ve got to figure out a way to beat Notre Dame if you want a chance to compete to win our league,” he said. ”And we did that tonight, so I’m proud of these young women.”

Asia Durr and Myisha Hines-Allen would combine for as many as Notre Dame would score entirely.   The Cards would meet their second highest scoring mark of the season, 100 (115 vs Murray St 11/24) and hold the Irish to their second lowest score of the season with 67 (66 vs Penn 12/3).    Durr finished with 36, 4 assists and 3 rebounds and Hines-Allen finished with her 7th double double of the season with 31 points, 12 rebounds, 3 assists, 2 blocks and 2 steals.

It’s not like Notre Dame had an awful game, either.. they ended up shooting 44% from the field and 41.7% beyond 3.   Louisville just looked that much better… on all cylinders.   The home crowd advantage of 12,614 avid Cardinal fans donned in red, stood to cheer on defense and erupted after every made bucket, fans didn’t spend too much time off of their feet.

”Offensively, we were as good as we’ve been all year,” coach Jeff Walz said. ”Not for the fact that we scored 100, but we passed the ball well. We got the ball to people when they were open at the right time.”

The Cards connected for 25 assists on 41 made baskets, players were diving for loose balls and the team put on their best performance of the year so far for the national crowd.  Cardinals forwards Sam Fuerhing and Jazmine Jones each scored 10 points and combined for 10 rebounds for Louisville, which at one point was shooting nearly 85 percent.  Arica Carter accounted for 6 points, 2 offensive rebounds for 2nd chance shots, 6 assists and 2 steals.   The Cards had 10 steals and 7 blocked shots as a team.

You could see the joy on the faces of Myisha, Asia and Coach Walz in the post game press conference.   They knew their glory in that moment but their humility keeps the team yearning for more. ”It does not stop here, though. We’ve got to keep on going. We can’t get satisfied with this win,”  Durr said.

The Cards get a BYE on Sunday before heading to Pennsylvania to face Pitt and then return home to face #13 FSU on 1/21.  Get your tickets #cardnation, you don’t want to miss it!