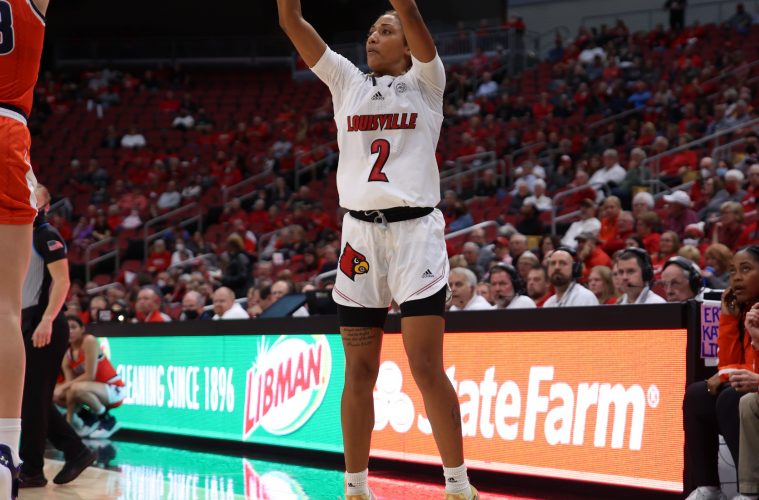 In a sloppy first half the Cards managed to have an 18-point lead going into the break, but at times I wasn’t sure how. Louisville was 14-37 from the field and just 4-15 behind the three, which continues their season long story of underwhelming three-point shooting. The Cards also had 9 turnovers in the first half which matched their game total against Washington just a few short days ago. Adding to their long list of issues in the first half, Louisville was missing wide open layups and that’s a problem we cannot continue to have moving forward. They were 6-12 for layups at this point and they were going to have to find a way to keep their lead. Thank goodness for defense, it wins championships, right? Well, it was at least winning this game. Totaling 24 rebounds in the first half, 19 of those came on the defensive end. Louisville also had 4 blocks and 7 steals which were led by Emily Engstler who had 7 first half (all defensive) rebounds, 2 blocks, and 3 steals.

Adding 38 points to their total score during the second half, Louisville managed to settle in and find some offense. They were shooting 58.6% in the third and fourth quarters and displayed impressive ball movement at times. I’m not sure what it’s going to take to fix the turnover issue, but as a team the Cardinals had 11 second half turnovers bringing their game total to 20. Against a better opponent (looking at you next week Michigan) this would have buried us and it’s something we need to figure out immediately. Overall, the Cards were 7-26 from the three-point line and had just 12 offensive rebounds.

After the game Coach Walz gave credit to Liz Dixon for playing a good ball game and not making too many moves. She finished her night leading the team in scoring with 15 points and 5 rebounds.

He went on to say that they are a better defensive team than they were last year, and he thought they did a really nice job while adding that they need to improve on the offensive end of things.

Louisville moves to 4-1 on the season and will head to Colorado State this Sunday, November 28th. They are scheduled for a 2p.m. EST tip-off. Following Sunday, they Cards will head home to host #12 Michigan on December 2nd at the KFC Yum! Center.