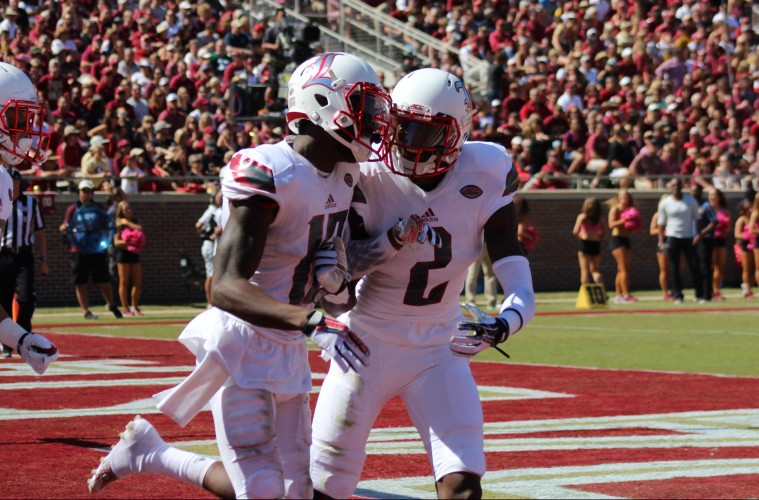 Louisville loses little on offense for 2016.  The Cards were young on offense so the short # of losses is predictable. Still losing Aaron Epps as a leader on the offensive line is a big deal.  As if losing placekicker John Wallace.

It’s pretty clear here that Lamar Jackson is Louisville’s starter this off-season.  Lamar was incredible playing on mostly instinct throughout 2015.  Lamar passed for 135-247, 1840 yards  12 Touchdowns and 8 interceptions.  Jackson also rushed for 960 yards on 163 carries and 11 Touchdowns.  Lamar needs to raise his 54.66% completion percentage into at minimum the low 60% range for Louisville to take a step forward.  The unique thing about Jackson is that his ‘check down’ is actually him taking off and running.  It’s proved effective but that sort of thing will drive down his completion percentage as it takes away from easy completions that other Quarterbacks enjoy.  So we’ll probably never see Lamar throw for 71% like Teddy Bridgewater did in his junior season.

The nice thing about Louisville’s Quarterback situation is that they have two great options coming back in Kyle Bolin and Reggie Bonnafon.  Kyle Bolin is your primary back-up and also provides the Cardinals with a change of pace & style if necessary.  Bolin possesses the clutch gene and while he can run, he’s a much better passer.  Kyle’s a quick trigger guy and has shown the ability to be very accurate.  The biggest deal for Kyle will be to become more consistent.  When he’s on.  He’s REALLY ON.

Reggie Bonnafon has a unique skill set.  He’ll certainly throw some passes in 2016 and will take reps as a Quarterback.  But Reggie’s role is going to be interesting in 2016 because he’s too good of an athlete to keep on the bench with limited reps.  Reggie threw, rushed and received in 2015 and that role should grow significantly in 2016.

Louisville didn’t have a lot back on the Offensive Line in 2015.  It doesn’t have that problem in 2016.  Louisville returns its starting Center Tobijah Hughley, 3 different guards that started games in Lukayus McNeil, Skylar Lacy, and Kiola Mahoni, and 2 tackles that started games Geron Chrisian and Kenny Thomas.

The Cards will have options here.  Many believe that Kenny Thomas’ best position is likely Guard, but unless a Tackle steps up and beats out Kenny at Tackle he probably won’t move down to his more natural position.  Candidates to win the tackle job opposite of Geron Christian (who is clearly the starter at Weakside Tackle) this Spring could be Toriano Roundtree or Danny Burns.  But the Cards are set at Guard and actually add redshirt freshman Chandler Jones into the mix.

At Center the staff gave a host of players every opportunity to beat out Tobijah Hughley.  None could.  Hughley improved greatly from 2014 to 2015 and is the likely starter for 2016.  Quite the path for the former walk-on.

It’s worth keeping an eye on Center Kevin Austin and Khalil Hunter this Spring also.

Louisville Running Backs had an ‘on again off again’ type of season for the Louisville offense.  Much of this was because the Cards were exclusively in shotgun and with Lamar Jackson running zone read and keeping so often, the Running Backs were often in blocking situations.  This should change in 2016 with Louisville keeping zone read in its arsenal but implementing more traditional concepts under-center.

Brandon Radcliff is likely Louisville’s #1 back but there should be a battle between LJ Scott and Jeremy Smith.  LJ has been patient splitting his time at Fullback and Running Back and showed the ability break some big plays for Louisville.  Jeremy Smith started to find his groove midway through the season but struggled with fumbles…..and Bobby Petrino doesn’t tolerate his running backs fumbling.

It will also be interesting to see if Griffin Uhl can be used more often at Fullback and how far along Trey Smith has come as a Running Back after redshirting in 2015.  Smith is the son of former Jacksonville Jaguar Jimmie Smith and came to Louisville with a lot of hype from Mississippi.  We should have a better feel for how this will shake out in the Spring.

Louisville had an experience problem heading into 2015.  That won’t be the case in 2016.  James Quick & Jamari Staples return for their senior seasons and a host of young players were able to gain experience throughout the 2015 season.

Cardinal fans should expect TREMENDOUS strides for Jaylen Smith, Traveon Samuel, Emonee Spence, and Devante Peete.  All of whom were freshman that saw action this past season.  We also didn’t get to see very much from Alphonso Carter due to a persistent hamstring issue.  Javonte Bagley has enormous potential and should also very much factor into the equation.

The main take away is that Louisville has a great deal of talent at Wide Receiver for the 2016 season. On the whole the Cardinal WRs are extremely athletic, can make catches, and block downfield very effectively.   The coaching staff will need to develop some depth for the future but there are more than enough playmakers here for 2016.

The Tight End position came alive in 2015 for the Cardinals.  Cole Hikutini led the way in receiving but it was more than just catching passes.  The blocking of the unit, particularly downfield, was leaps and bounds improved.  Hikutini, Keith Towbridge, and Micky Crum all had 3 Touchdowns a piece.  Charles Standberry dropped a sure TD vs. North Carolina State as well.

Everyone returns from this group and the question on who is the #1 Tight End will rage on throughout Spring & Fall Camps.  But no matter who wins the starting or #1 Tight End job, the story here is that Louisville has a series of very good Tight Ends who are capable of making plays of various varieties.  This is another well-formed group for the Petrino offense and fans should expect more growth here in 2016.

Losing John Wallace is problematic for Louisville because there really isn’t anyone on the roster with a great deal of experience.  Jon Brown seems to be the choice as he has a strong leg, has handled kickoffs for the Cards in the past and has shown some accuracy.  It will be interesting to see if Jon is consistent enough for his coaches during Spring or if the staff feels it is necessary to find competition.  Admittedly the other options here are largely unknown to me at this point.  This is also potentially a spot for Austin Johnson but it’s doubtful that Petrino allows a true freshman to handle all of the kicking duties (punting, placekicking, etc.) but we will see.

What Is (Potentially) Coming In