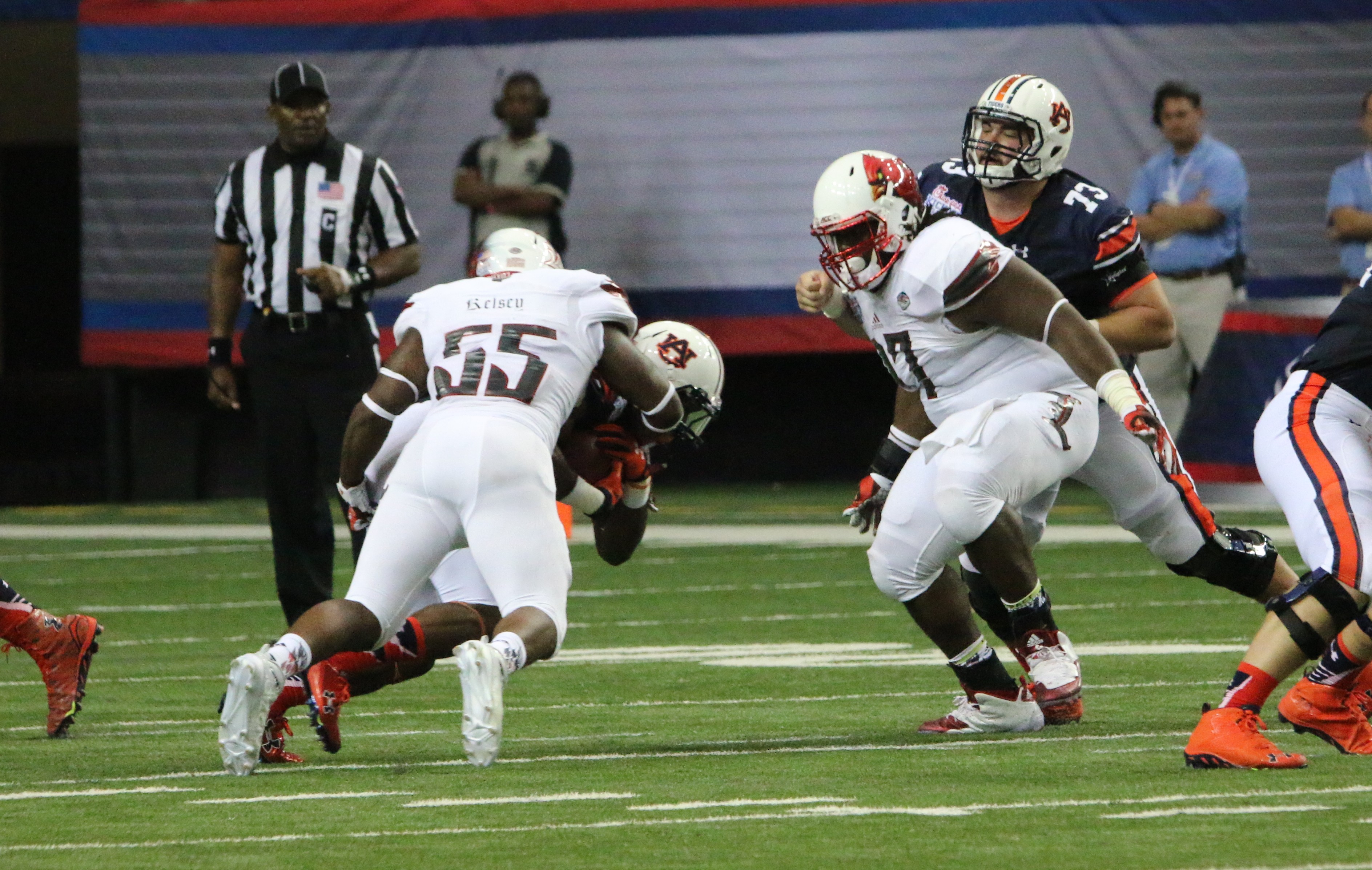 The Cards are losing some key pieces defensively.  James Burgess, Sheldon Rankins, Pio Vatuvei, and Jermaine Reve were regular and integral pieces of the Cardinal Defense.  James Burgess tallied 92 tackles and 9.5 TFLs and was 2nd on the team in tackles, Sheldon Rankins was 6th in tackles with 58 and had 13 TFLs with 6 sacks.  That’s a tremendous amount of production.

Additionally Jermaine Reve was a steady 4 year player that gave the Cards a great deal of flexibility in the passing game.  Pio Vatuvei came in at a critical time for Louisville and provided the D-Lineman it needed for the past two seasons.

Coming back Louisville has 4 Defensive Linemen that contributed greatly in 2015 and 1 player in GG Robinson that brings a great deal of excitement.  We’ll see how ready GG is to get going after his redshirt season, Louisville fought hard to get him. DeAngelo Brown has been the Nose Tackle for Todd Grantham the last two seasons and decided to return for his senior season despite graduating last month.  Johnny (DeAsian) Richardson can play inside & outside and battled back from a knee injury in pre-season to come back and play the seasons’ final 5 games. Johnny has a unique ability, but MUST STAY HEALTHY.  Drew Bailey will have an increased role with Rankins departing.  Bailey had some fantastic moments, but will need to play with consistency in 2016.  Kyle Shortridge also has the ability to play inside & outside and has the opportunity to see the most time on the field as a Cardinal and is more than capable, but it’s time.

It’s important to note that in Todd Grantham’s system it is difficult to uniformly say that specific players will always be in specific roles.  Grantham recruits players who can do multiple things and play multiple positions.  Because of this outside linebackers listed below often move up to play defensive end situationally and in different schemes.  James Hearns specifically.

Even having those OLBs with the ability to come up Louisville does need bodies along the Defensive Line.  The season is too long to put this much pressure on 5 bodies for 3 spots in practice and games.  We’ll cover the additions below.

Keith Kelsey is Louisville’s leading tackler and the leader of its defense.  Keith returning to UofL for 2016 is HUGE.  Our expectation for Louisville’s defense in 2016 is to take fewer snaps but against offenses that are under more stress than we saw in 2015…..that leads to fewer overall tackles BUT more big plays.  It’s going to be difficult for Keith Kelsey to have more than 107 tackles, but I do think we’ll see more TFLs and turnovers forced (INTs and FFs) for Keith which have more of an impact than the volume of tackles.  The goal for Keith is to be the best linebacker in the ACC and that is definitely achievable here.

We also saw how well Stacy Thomas played in relief of James Burgess after his ejection in the Music City Bowl.  But while Keith Kelsey is an easy starter for 2016, Stacy Thomas is going to need to audition because Louisville has 2 young players who have big time ability in Amonte Caban & Isaac Stewart.  Stacy is also a big play guy and should be able to win the job.  The one criticism I’d have was the TD run for A&M came after Stacy got dinged two plays earlier and the Aggies ran right at him for the score…must be able to play through that or sub out.

Getting Devonte Fields back is TREMENDOUS.  Fields is another player that by returning has an opportunity to be 1st Team ALL-ACC and a high NFL Draft pick.  Fields’ 2nd half of the season didn’t even resemble his 1st half of 2015 as his production went off the charts in the final 7 games.  Fields recently had shoulder surgery and will miss the Spring, but is sitting on a HUGE 2016.

Losing Trevon Young in the bowl game hurts.  He’s not officially ruled out for 2016 yet, but based on our research of timelines from hip fractures & dislocations we are ruling him out until 2017 for the purposes of this exercise.  So someone else is going to need to step up.  That person could be be James Hearns.

One player I’m looking at is Henry Famurewa who was believed to be set for a breakout in 2015 after a redshirt season.  Henry tore his labrum during the 2015 season which was surgically repaired this Fall.  It’s not clear whether or not Famurewa will be available for Spring Ball, but if he is that gives him a much better chance.

We’re also going to keep an eye out for Jonathan Greenard & Finesse Middleton.  Greenard is coming off his redshirt freshman season and provides a great frame for what Todd Grantham does with the OLBs.  Finesse Middleton has long arms like Elvis Dumervil and honestly expected more of an impact from him by now.

One other thought is playing Josh Harvey-Clemons more at OLB, but more on that below.

Josh Harvey-Clemons coming back for the Cards gives the Cards a high potential player for the Cardinal defense.  JHC is a big safety and I’m curious to know what the NFL feedback on his game would be.  Would an NFL team draft Josh as a Safety and play him there?  Or would an NFL team prefer to add a few pounds and play Harvey-Clemons at OLB?  Josh is such an intriguing player and said during his announcement that he didn’t have the season he wanted.  The good news for Louisville is that because Josh plays the “STAR” position he is versatile and sometimes actually does play the OLB role while also covering OR dropping back like a traditional safety.  So it will all be on tape for NFL teams and JHC can maintain the role he played in 2015 for Louisville.

Because JHC is the “STAR” and because Louisville plays so much Nickel or Peso Louisville really plays 3 Safeties.  We know that Chucky Williams likely has a leg up to snag the position that he started in all season.  But who starts at the other spots?

Zykiesis Cannon, Dee Smith, Khane Pass & Terrance Ross figure to be in the mix.  Ross tore his ACL prior to the 2015 season but has a TON of ability and physicality. Dee Smith played and recorded an INT vs. Wake Forest and the coaches send a lot of praise his way.  Dee was also injured during the season which limited his production in his freshman season.  Khane Pass also got a great deal of praise from Garrick McGee for his play on the scout team during his redshirt freshman season.  Zykiesis Cannon played a lot early for Louisville but took a shot v. Houston and we didn’t see his role in quite the same way following that. It’s nice for the Cards to have options that were in the program last year but this may not get settled in the Spring, but who wins the final spot will be a big deal in limiting the number of big plays Louisville opponents are able to gain in 2016.

The 3 main guys returning for Louisville are of course Shaq Wiggins, Trumaine Washington, and Jaire Alexander.  These 3 got the most snaps in 2016 at the Corner position with Trumaine leading the way with 55 tackles, 7 TFLs, 4 INTs, and 2 Forced Fumbles as a sophomore.  Washington grew tremendously in Year 2 and it stands to reason that he will once again in his junior season.  Shaq Wiggins was solid in coverage as was Jaire Alexander.  With these three Louisville has an excellent rotation.

De’Eric Culver also was reliable in his opportunities as a physical corner.  Cornelius Sturghill & Devontre Parnell both have a great deal of athleticism and potential as well.  The Cards have plenty of viable options as corner, but they do need to work on developing future talent starting with the 2016 class.

One other thing about Louisville’s top 3 Corners is the possibility of playing a Corner at Nickel.  Especially if Josh Harvey-Clemons actually did move to OLB  or if the Cards decide to keep him exclusively at Safety.  More than likely though JHC stays at “Star” and all of this moving around talk is for nothing.

Colin Holba is your incumbent Long Snapper.  Holba has great size for punt coverage and snapped well both kicking and punting for the Cards in 2015.  Louisville should be good here with Holba for another season.

Josh Appleby was terrific at punter.  There isn’t much publicly out there about Mason King, so this is something we’ll have to watch for in the Spring.

What IS (Potentially) Coming In

The Cardinal coaches probably feel pretty good about their current D-Line roster, but UofL has a MAJOR need for youth for the future.  JUCO Chris Williams likely factors into the rotation immediately after being named the JUCO National Championship Defensive Player of the Game while the freshman probably take the path of G.G. Robinson and redshirt.

Caleb Tillman and Michael Boykin are the highest rated by the ‘services’ out of the freshman group here. But the thing to look at each player is the frame and versatility that each could provide in the 3-4 set.  The one thing missing is a true Nose Tackle here, but if you put on the tape each of these guys can play.  It’s a solid group.

Louisville is set for OLB in 2016, but the Cards always have to have an eye for the future.  Tabarius Peterson can really play, but UofL won’t need him to in 2016 and he’ll have the benefit of learning from and watching some truly elite pass rushers.  It’s a great situation for Tabarius and for Louisville.

This group of Safeties are all 3 some of Louisville’s best commitments of the 2016 class.  And that’s saying something.  It will be hard to keep all 3 off the field as there is a lot of talent here but we’ll have to see what the pecking order is when we get into Fall Camp.  Very exciting group.

Ronald Walker signed in December during the JUCO period and enrolled for Spring Semester.  Walker was brought in to play Cornerback and is also a “Star” position prospect with his size.  Rodjay Burns also has great size and is one of the better defensive prospects to come out of Kentucky in a while.  Burns probably doesn’t need to rush to the field, but sometimes players just find their way to the field.  That could happen here.

Louisville is set a Long Snapper for 2016 but Kyle Goss could work his way into the mix for the future.

Louisville needs a new punter with Josh Appleby moving on.  Austin Johnson has been a do it all guy for DeSales and is the brother of former Cardinal punter Ryan Johnson. So it’s in the pedigree.  Austin also played QB for DeSales but we’ll see if he can handle the full-time punting responsibilities or not.  The Cards also need a kicker.