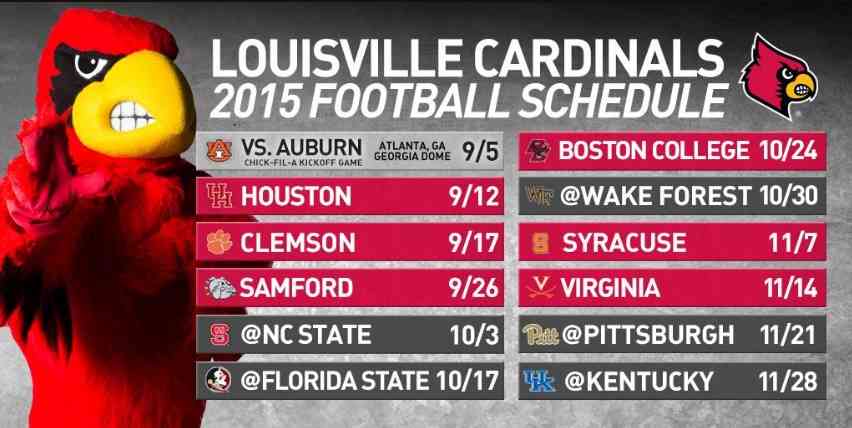 Riding the momentum of a third-straight nine-win season, the University of Louisville announced its 2015 football schedule on Thursday.

Finishing at 9-4 overall, 5-3 in their first season in the ACC, the Cardinals ended the year by winning three of their final four games, including road wins at Boston College and Notre Dame.

Entering into their second Atlantic Coast Conference campaign, the Cardinals will play 12 regular-season contests this fall, including seven against schools that advanced to bowl games and five teams who won eight or more games last season.

Louisville will kick off the 2015 season versus Auburn (Sept. 5) in the Chick-fil-A Kickoff Game at the Georgia Dome in Atlanta. The Tigers finished 8-5 last season after dropping a 34-31 decision to Wisconsin in the Outback Bowl.  Louisville and Auburn have met only once on the gridiron, dating back to 1974. The Tigers defeated the Cardinals 16-3 at Legion Field in Birmingham.

Three-straight home games will greet the Cardinals after the non-conference opener, highlighted by the ACC opener on Thursday night versus Clemson (Sept. 17). The Cardinals and Tigers met for the first time last season in “Death Valley” with Clemson outlasting Louisville 23-17.

Louisville opens its home schedule versus Houston (Sept. 12) and faces FCS-foe Samford (Sept. 26) for the first time in school history.

Two league games on the road will provide a big test for the Cardinals, traveling to NC State (Oct. 3) and, after a week off, Louisville faces off against College Football Playoff participant Florida State (Oct. 17), which came back from a 21-0 deficit last season to win at Louisville 42-31.

Boston College (Oct. 24) will make its first appearance at Louisville since 1998 after Louisville defeated the Eagles 38-19 last season in Chestnut Hills, Mass.

Making their lone Friday night appearance of the season, the Cardinals will travel  to Winston-Salem, N.C.,  when they take on Wake Forest (Oct. 30). Louisville defeated the Demon Deacons 20-10 last year at Papa John’s Cardinal Stadium.

Louisville closes out the home portion of its schedule with consecutive games versus Syracuse (Nov. 7) and Virginia (Nov.14). The Cardinals defeated the Orange 28-6 in the Carrier Dome last year, and dropped a tough 23-21 loss to the Cavaliers a year ago.

The ACC season comes to a close when the Cardinals visit Pittsburgh (Nov. 21). The former BIG EAST members will face each other for the first time since 2013.

The Cardinals end the regular season on the road versus in-state rival Kentucky (Nov. 28).  Louisville has won four straight versus the Wildcats, including a come-from-behind 44-40 win last season at Papa John’s Cardinal Stadium in the first encounter as the regular-season finale.

Louisville returns 10 starters from last year’s team that finished the season with a loss to No. 13 Georgia in the Belk Bowl.