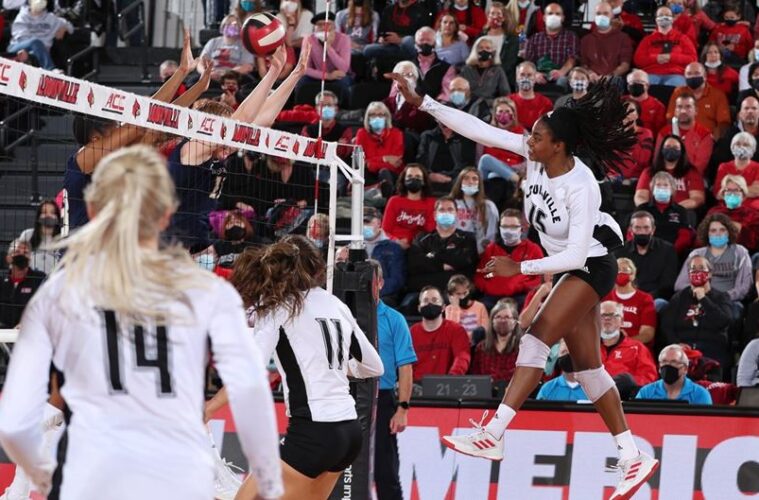 With the win, Louisville continues its magical season, improving to 24-0 overall, 14-10 in the Atlantic Coast Conference. As a team, the Cardinals had 44 kills while hitting .259 with 12 blocks, seven aces and 40 digs. Claire Chaussee was second on the team with 11 kills and hit .360 for the match. Aiko Jones added 8 kills with Anna DeBeer and Amaya Tillman contributing six each. Tori Dilfer tallied 34 assists and a team-high 13 digs and an ace with Elena Scott adding 10 digs and a team-high two aces.

Georgia Tech had 46 kills and hit .216 with 52 digs and four blocks. Julia Bergmann led the Yellow Jackets offense with 15 kills, hitting .258 with nine digs. With the loss, Georgia Tech is now 21-4 on the season and 9-3 in conference play.

Neither team was able to take an edge early in the first set as they traded points back-and-forth. Georgia Tech took a small 7-5 lead, but Louisville scored the next two points to even the set 7-7. The Cardinals went up 12-9 after a 3-0 run led by two service aces from Elena Scott. UofL would continue to pace the set, taking a 15-11 lead into the first media timeout of the match. The Yellow Jackets took four of the first five points following the break, including a three-point run to get back within one at 16-15. Louisville forced Georgia Tech to call its first timeout of the set after Amaya Tillman landed a kill and a big block to push the lead back to three at 19-16. Georgia Tech used the break to their advantage, going on another 3-0 scoring run to cut Louisville’s lead down to one at 20-19 as the Cardinals called their first timeout. The Yellow Jackets took their final timeout late in the set, down 22-20. UofL would go on a 3-1 scoring run to close out the first set 25-21.

Louisville carried its momentum into the second set, jumping out to a quick 5-1 lead. Georgia Tech continued to play hard, using a three-point scoring run to get back within one at 8-7 before kills by Anna Stevenson and Claire Chaussee put the Cards back up 10-8. The Yellow Jackets rallied again, tying the set 12-12, but back-to-back kills and an ace from Aiko Jones would give the lead back to the Cardinals as they went up 15-12 heading into the media timeout. Georgia Tech scored the first three points out of the break to tie the set again at 15-15. Louisville took the next two points to take back the lead 17-15. The two teams would go on to trade points back-and-forth before Georgia Tech called its first timeout of the set down 22-19. UofL scored three of the final four points, capped off by kill from Anna Stevenson, to win the second set 25-21 for a 2-0 set advantage.

The third set started much like the first with neither team able to find an edge. UofL used a three-point run to take an early 5-2 lead, but Georgia Tech used a 4-0 run of their own to go up 7-5. The set remained tightly contested as the scoring went back-and-forth. The Cardinals continued to battle, using a three-point run to take a 12-10 lead but the lead would not hold as the Yellow Jackets scored the next two points to even things back up 12-12 and would go on to take a 15-14 lead over the Cards into the media timeout. UofL scored four of the first points out of the timeout, led by Anna Stevenson with three kills, to take a late 18-16 lead and force Georgia Tech to call its first timeout of the set. The Cardinals would keep up the pressure, scoring another two points after the timeout for a 20-17 lead as Georgia Tech called its final timeout of the set. The Yellow Jackets continued to threaten, going on a 4-1 run following the break to even the score 21-21 and force UofL to call its first timeout. Georgia Tech came out of the break strong once again, scoring three points to take a late 24-23 lead and force UofL to call its final timeout of the set. Louisville’s timeout would pay off as the Cardinals went on a 4-1 run to close out the intense set, downing the Yellow Jackets 27-25.