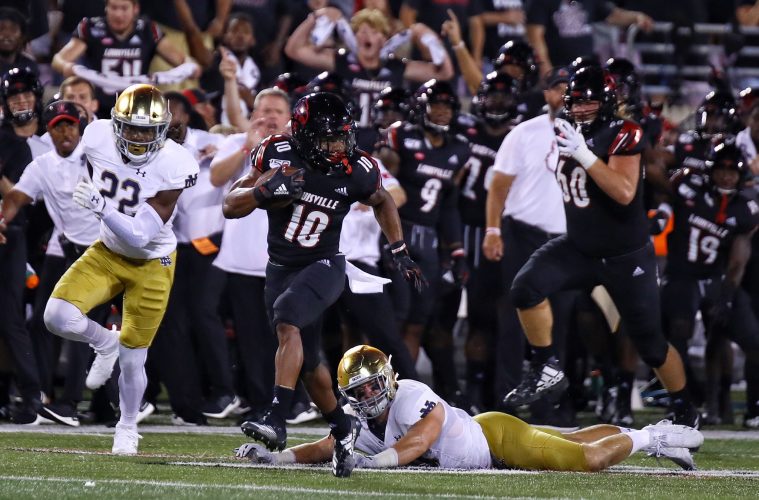 (You guys outrushed Notre Dame tonight, mark for yourself. Talk about your performance tonight.)

“I mean all I did was hit the holes.  Everyone showed up tonight. Notre Dame has one of the Top-3 d-lines in the country. So for us to go out there and do what we did is good and good to look forward to.”

(Finding ways to get for you guys ????) “It’s just that fight. The coaching staff came in and told each and every one of us just to fight, and when we correct small stuff we’re going to be better that what we was tonight.”

(First start, record-setting attendance, what was that like for you?) “It was nerve-wracking at first, but once you get in the game, you get the feel of it, it’s just natural. We’re just playing ball and doing what we love.”

(What are some of those small things you think you need to correct?) “Just mental mistakes. Just false starts, we put the ball on the ground too much. We just got to back the defense up, defense played hard. We got to match their energy.”

(Those fumbles, do you guys start thinking of those as they start piling up?) “We do, but we don’t. With our staff’s mentality, we have to finish this game. We losing, but not matter what we got to finish.”

(Coach has said the run game is the base of this offense. A lot of pressure on you guys, how did it feel for you to converge and get that done?) “It’s a great feeling, knowing they put trust in us and we just go out there and performed how we supposed to. Like I said, it feels great knowing that they trust us.”

(Russ Notre Dame came out on that first drive and made it look pretty easy, there 75 yard drive and you guys made it look pretty easy. Was there something going on with defense maybe like a message between the defense and you guys?) “The first drive we really made a lot of mental errors and mental mistakes on that drive that was really out of character and that’s what led to them scoring pretty easily and we really got those corrected the second drive and that’s how we were able to come out and get a 3 and out.”

(Both of you what was it like playing for a full stadium with the atmosphere that was here? I have never seen that before) “I am really thankful that the fans came out and supported us tonight especially after last season. It really meant a lot for them to come out the first game and it to be an atmosphere like that and we was able to feed off of that.”

(CJ what is your overall thoughts on how the defense performed?)  “I think we played pretty well I just think we beat ourselves with mistakes of our own and that’s why they scored on the couple of drives that they scored but overall I think we played well the attitude and the effort part that we have been preaching since day one and I think it will all come together.”

(CJ other than that first quarter they really did not have a lot of success blocking you, is that the defense adjusting or was that just a matter of you getting to the ball better?) “Yeah that was just I mean a really good defense adjustment by our coaches and players we locked in mentally and like I said we started playing better with attitude and effort. Getting to the ball.”

(Both of you what was it like playing for a full stadium with the atmosphere that was here? I have never seen that before) “Yeah I believe it was an amazing game man it was amazing to see coming from 2-10 last year you know not having a lot of success and seeing all of those people support us you know.”

(This is for either one of you guys that want to answer this. Plenty of times tonight you had a second down and you guys would be playing some type of zone coverage and a little bit deeper than what you normally would on second down can you guys what the thought process was with different formations like that?)  “Um I mean that’s just something Coach Brown called, and we just executed what he called. I mean sometimes they got us and sometimes they didn’t, but you know that just a part of playing defense sometimes the offense will get you.”