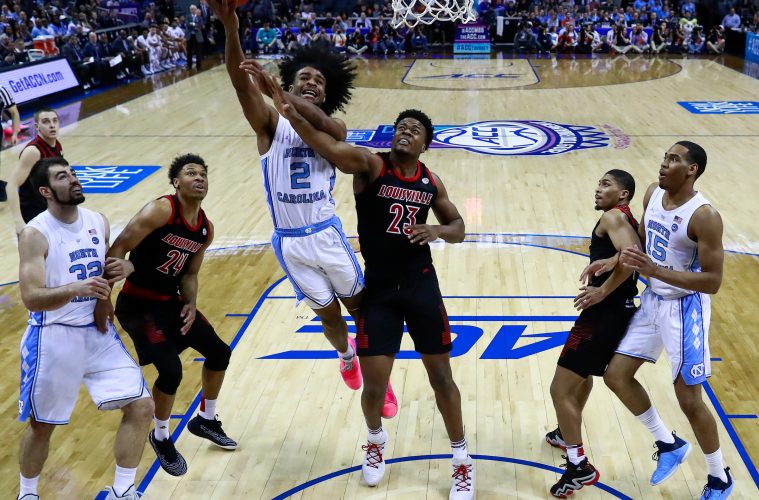 Cameron Johnson scored all of his 14 points in the first half to help the Tar Heels (27-5) extend their winning streak to eight games.

Dwayne Sutton had 14 points for Louisville (20-13). The Cardinals shot just 10 of 34 from 3-point range.The Cardinals beat North Carolina by 19 on Jan. 12 in Chapel Hill – Roy Williams’ worst home loss ever as Tar Heels coach – using their size and length to disrupt shooters and control the glass.

North Carolina had no trouble in the rubber match between the teams.
The Tar Heels got things going early and built a 45-35 lead at the half behind Johnson and White. The versatile Maye scored from down low and stepped out beyond the arc to display his silky smooth jumper.The lead hovered around 10 for most of the second half until the Tar Heels got their transition game going with eight straight points on run outs – including four by Kenny Williams – to stretch the lead to 18 with 6:24 left.

Louisville: Despite the loss, the Cardinals appear to have a good chance to get an at-large berth in the NCAA Tournament as a 20-win team in a tough conference.

North Carolina: The Tar Heels arrived in Charlotte chasing a No. 1 seed in the NCAA Tournament and got that effort going with a balanced scoring attack.

Louisville: Will await word on an NCAA Tournament bid.
North Carolina: Will face the winner Duke-Syracuse winner in the semifinals Friday night.

No. 2 seed North Carolina (27-5) advanced to Friday’s 9 p.m. semifinal game between the winner of Thursday evening’s final quarterfinal game between third-seeded Duke and sixth-seeded Syracuse … The Tar Heels defeated Duke twice during the regular season, winning 88-72 on the road Feb. 20 and by a 79-70 score at home last Saturday night … UNC defeated Syracuse 93-85 on Feb. 26 in Chapel Hill.

Luke Maye and Coby White led UNC with 19 points each … White also handed out a team-high six assists, and Maye just missed his 14th double-double of the season with a team-leading nine rebounds.Maye scored in double-figures for the 26th time this season.

Cameron Johnson scored all 14 of his points in the first 20 minutes to help stake UNC to a 45-35 halftime lead … It marked Johnson’s 13th consecutive game scoring in double figures.

Johnson went 2-for-3 on 3-point shot attempts … UNC is 24-2 this season when Johnson had made two or more field goals in a game.

North Carolina is now 175-19 in games played in Charlotte, including 22-7 in ACC Tournament games.Dwayne Sutton went 4-of-9 from 3-point range and led Louisville’s scoring with 14 … Sutton’s four made 3-pointers matched his career set five times this season, including his 4-for-8 effort in Louisville’s home game versus UNC on Feb. 2.

The Cardinals’ Malik Williams scored 10 points and pulled down a game-high 13 rebounds for his fourth double-double of the season … Williams’ 13 rebounds matched a career high.