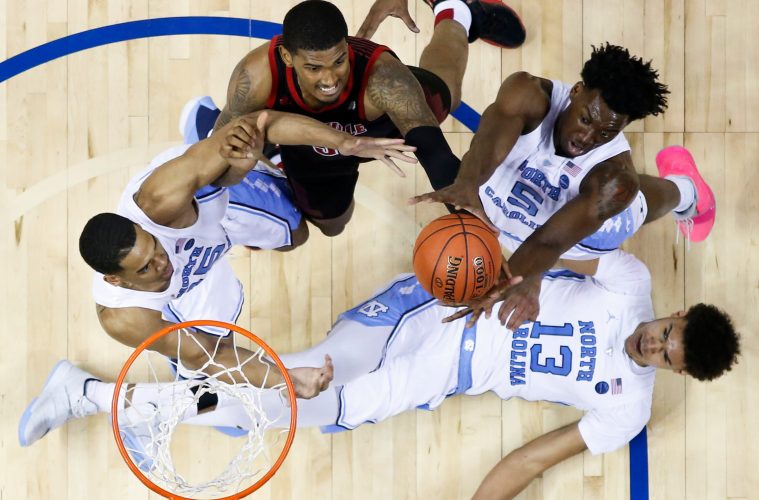 CHRIS MACK: Carolina is a great team. They were better than us tonight, that’s for sure. And it’s nothing that we didn’t know coming in. But I thought where the game got out of reach for us early on was because of their transition. I mean it’s phenomenal, as fast as any team I’ve coached against. And you talk about it, you talk about it, but talking doesn’t prepare you sometimes. And you give those guys credit, they were shot out of a cannon, that ball was up the floor and in such a hurry and got to the rim, they hit the rim runner a couple times, they get advance pass threes to Cam Johnson and really, really put us back. And we were never able to recover enough. I give our guys great credit for continuing to fight against one of the elite teams in all of college basketball, but I thought those were the two things that we could have controlled. It takes effort and communication to get back in transition and then it takes effort to keep them off the glass. I thought we passed for the most part that second part of keeping them off the glass, but we didn’t do the job that we needed to do in transition. Second half turnovers when we started to cut the margin just killed us.

Q. You have to be happy with V.J. and Darius Perry’s progress going into the tournament. You really got bench punch now, how does that make you feel?
CHRIS MACK: Great. I thought for the better part of both games a lot of guys stepped up. And hasn’t always been easy for Darius and V.J. through out the year but they really gave our team a shot in the arm. I thought they did great things on both ends of the floor and hopefully they gained a lot of personal confidence. We’re going to need to be a deep team and if we expect to make any type of run in tournament play.

Q. You did a great job of keeping them out of transition in Chapel Hill and if I remember the Louisville game you made them play a lot of half court offense in that game as well. What was different tonight and then I would ask specifically what part did Kenny Williams defensive pressure early play in getting them some turnovers and get the break going?
CHRIS MACK: It’s hard to say what they did better, other than Roy did something that to get those guys shot out of a cannon. I remember years ago when he coached Kansas against Marquette I believe in the Final Four in New Orleans and I don’t know if I have ever seen a team play as fast that day as they did until today. The floor was tilted, even on made shots we could not get back and we ended up adjusting. Instead of sending three guys to the offensive glass we ended up sending two and we haven’t done that one time all year in both games that we played Carolina. So I think it was more them trying to swing a knockout punch early and play downhill. And Coby White made the right decision each and every time whether it was an advance pass to Cam Johnson, whether it was to Brooks underneath, I mean even when Malik got his first foul of the game it was in transition right under the restricted arc. So they’re a load when they play that quickly. Not just Kenny Williams, but all those guys I thought were very, very handsy, they pressured our guards, they did a really good job on ball screen coverage for the most part and they have terrific length and great anticipation. And while we took care of the ball well in the first half we certainly didn’t do it well enough in the second half to give ourselves a chance to cut the margin even further.

Q. When you guys will see some new faces in the NCAA tournament do you think this team will thrive against the grind of the ACC that you’ve been through, will that help you when you get to the NCAAs?
CHRIS MACK: I told these guys in the locker room that we have played the best teams in the country. I mean there’s a reason that y’all are talking about a possibility, not saying it’s going to happen, a possibility of three No. 1 seeds. That’s incredible. And even if they don’t get three, if even if our league doesn’t get three No. 1 seeds it just shows you the quality of basketball that we have. So, yeah, it beats you up, and they’re extremely talented and well-coached. It’s the best conference in the country, in my opinion. But every game in the tournament is going to be difficult. Every single one. Hopefully our guys understand that when we do the things that we can control, we’ll give ourselves a chance to win against anybody.

Q. Duane, after their early surge I think they were up 16 something like maybe 18 you guys came roaring back, you got a lot of transition, got the lead down to one, hit a lot of, you hit several threes in there, what was going well during that phase of the game and why weren’t you able to sustain it?
DWAYNE SUTTON: I think our energy picked up throughout that stretch, we did a good job of rebounding the ball in that stretch and pushing the tempo ourselves, but I think we made some mental mistakes and they got the lead back to around 10 at that point, but I think we did a good job of cutting the lead at that point.

Q. Chris, you talk about things you can control, what one or two things in this game would you really have like to have maybe had a little bit better handle than you did?
CHRIS MACK: I think those two. Transition defense early on, I thought we did a much better job when we weren’t giving live ball turnovers in the second half. I thought we did a much better job of getting matched up and making it more five on five and they’re still terrific in the half court. Luke Maye is a tough matchup for anybody, Cam Johnson is so efficient he doesn’t waste any time on the floor. When he’s open he shoots, when he’s not he doesn’t. But if we could have boxed them in and made them play a little bit of half court more in the first half. In the second half we just, we had too many turnovers. And that’s what went from about a 10 point, 11 point margin where, hey, we got a fighter’s chance to get this to a couple possession game if we handle ourselves and we turned the ball over and that wasn’t a trait of ours the first 30 minutes, but it was the last 10.