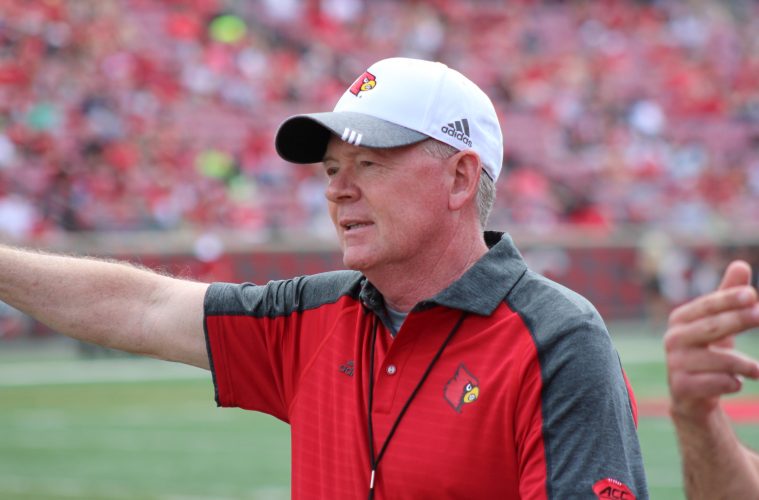 Work for the 2018 University of Louisville football season starts Tuesday afternoon, when head coach Bobby Petrino and the Cardinals hit the field for the start of spring practice.

The Cardinals will conduct 14 practices before taking the field for the annual Wendy’s Wonderful Kids Spring Game in Papa John’s Cardinal Stadium on April 14 at 1 p.m.

The Cardinals hit the field Tuesday and Wednesday, starting at 3:50 p.m.

For the first time in two seasons, the Cardinals will have a new quarterback under center as Heisman Trophy winner Lamar Jackson declared early for the National Football League Draft.

Sophomore Jawon Pass, who played in six games last season, has been named the starter for spring practice. Petrino likes that he’s already earned the respect of the entire team, as he takes over for one of the greatest players in Louisville history.

“Jawon has tremendous respect from his teammates,” Petrino said. “He has enough self-confidence and belief in his himself to go out there and perform.”

Coming off the bench a year ago, Pass went 23 of 33 for 238 yards and a pair of scores, completing an impressive 69.6 percent of his throws. In his second career game, Pass went 14 of 19 for 115 yards and one score in a 55-10 win over Murray State. He tossed his first career score when he hit Javonte Bagley for a 14-yard touchdown.

“I want to see Jawon be a little more urgent – he’s a laid-back guy,” Petrino said. “He needs to walk to the huddle a little faster. He’s very intelligent and really knows the game. He needs to just relax and play.”

“It’s been good,” Petrino said of VanGorder’s transition with the players. “Brian’s a real teacher and really wants everything done detailed. It’s been really good for our players. I’ve been impressed with how the players have responded to him.”

Hitting the field for the first time, the Cardinals welcome eight newcomers to the squad as early enrollees and each will make their debut for the Cardinals at Tuesday’s first practice.

“I’m excited to see how the new guys come in and compete,” Petrino said. “They’ve all come in and done a good job adjusting to college football. It will be interesting to see how it all plays out for them this spring.”