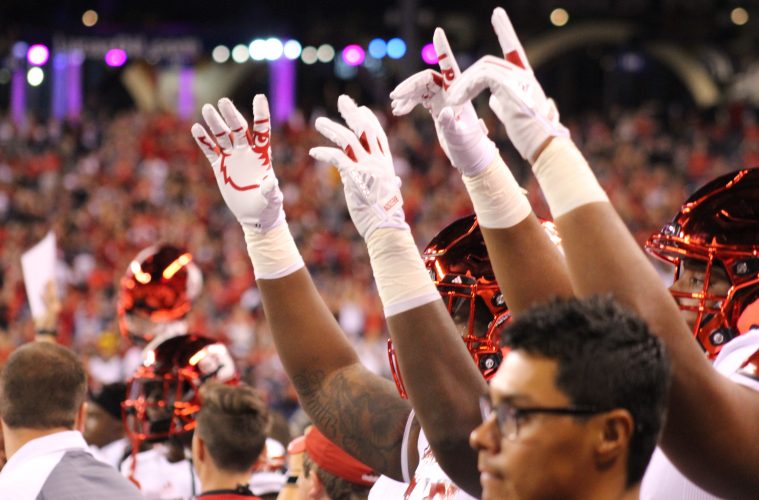 For seven-consecutive seasons, Louisville’s defense has ranked in the top-25 nationally. Breaking into the lineup, given the success over that span, is an all but easy task.

Dorian Etheridge, however, has shown that he is anything but a standard freshman. When he took the field in the season opener against Purdue, he became the first true freshman to start at linebacker since James Burgess during the 2012 season.

From the start of fall camp through the first two games of the season, both victories, Etheridge has displayed an exceptional ability to understand the playbook and deliver at an important position.

“It’s always a great feeling coming in and playing your first year,” Etheridge said. “It’s tough though. Every week, you’re constantly getting better. The group of guys we have – they’re great players. You can’t beat them. You have try not to be the weak link of the team or the starting defense, so you have to stay ahead.”

Though his confidence may lack a little because of the inexperience, the Charleston, W.Va., native actually hasn’t been shy in putting his nose to the ball. He is one of six players with double-digit tackles, courtesy of an eight-tackle performance in the victory at North Carolina.

As part of a defense that is loaded with veterans, inside linebackers Cort Dennison believes Etheridge can still improve – but is confident in his ceiling.

“Dorian’s done well, but like I said, he’s got plenty of room for improvement too,” Dennison said. “He’s obviously a freshman and he’ll have his growing pains, but I’ve been really impressed with his maturity level, the way he’s handling himself. He’s tackled well. He’s been on special teams. He’s done everything we’ve asked him to do. I’m excited for Dorian, not only this year, but he’s got a really bright future.”

Etheridge credits his quick learning to one of his fellow linebackers Stacy Thomas.

A senior from Miami, Fla., Thomas totaled a career-best 85 stops as a junior and played a valuable role in key games last year, racking up seven tackles against Florida State and 11 against LSU in the Citrus Bowl. In his career, he has played in 41 games – 13 as a freshman – and amassed 135 tackles. He

“He’s been here for so long, so he’s seen everything,” Etheridge said. “Any time I have a question, he always gives me the answer. He’s always there. Anything I need, he helps me.”

That is proving not only to be helpful to Etheridge, but also to Louisville’s defense that ranks second nationally in rushing defense and 28th in sacks per game.

With one of the biggest matchups in program history on the doorstep, Louisville needs both sides of the ball to play exceptional. And though Etheridge is still getting a taste of football at the collegiate level, he doesn’t view Saturday’s contest against No. 3 Clemson any differently.

“Every game is a big game for me.”