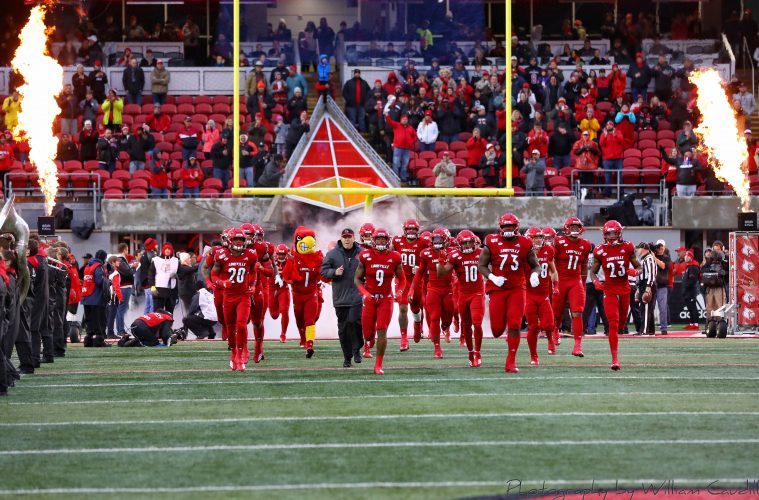 The ACC released the 2020 conference slate for its members on the Packer & Durham show on the ACC Network. Louisville’s dates for the 2020 schedule are now known.

After posting the top turnaround among Power 5 schools last year, the University of Louisville football team will once again face a dynamic schedule in 2020, as the Atlantic Coast Conference announced its schedule on Wednesday.

The Cardinals will face seven schools that won eight or more games last season, and two that finished in the top 15 of the national rankings in Clemson and Notre Dame.

Coming off a 2-10 season in 2018, the Cardinals closed the year at 8-5, finishing with an exciting 38-28 victory over Mississippi State in the Music City Bowl.

The Cardinals will open the 2020 campaign – the second under ACC Coach of the Year Scott Satterfield — and the ACC schedule when NC State visits Cardinal Stadium for a Thursday night game on Sept. 3. It will be the first time the Cardinals open the season with a league game since beginning the 2014 season against Miami.

The conference schedule continues with a trip to face Clemson on Sept. 12. The Cardinals are making their fourth trip to Death Valley and continue to look for their first victory against the Tigers.

League action returns with a pair of road contests on Saturday, Oct. 3 at Syracuse and Saturday, Oct. 10 at Boston College. The Cardinals picked up a 56-34 win over the Orange at home last season, and earned its first conference win in over a year with a 41-39 victory at home in 2019.

Louisville continues its league slate with a trip to Charlottesville, Va., to face Virginia on Saturday, Nov. 7 before returning home to close the league schedule against Wake Forest on Nov. 14.

After defeating Notre Dame in their first trip to South Bend, Ind., in 2014, the Cardinals travel to face the Fighting Irish on Saturday, Nov. 21. Notre Dame opened the 2019 season with a 35-17 victory over the Cardinals at Cardinal Stadium.

For the seventh straight season, the Cardinals will close out the regular season with Kentucky on Saturday, Nov. 28 as part of rivalry weekend.

The Cardinals return 16 starters – eight on offense and eight on defense – highlighted by the return of first team all-ACC wide receiver Tutu Atwell, who set the school record in receiving yards with 1,276 and second team all-ACC running back Javian Hawkins.