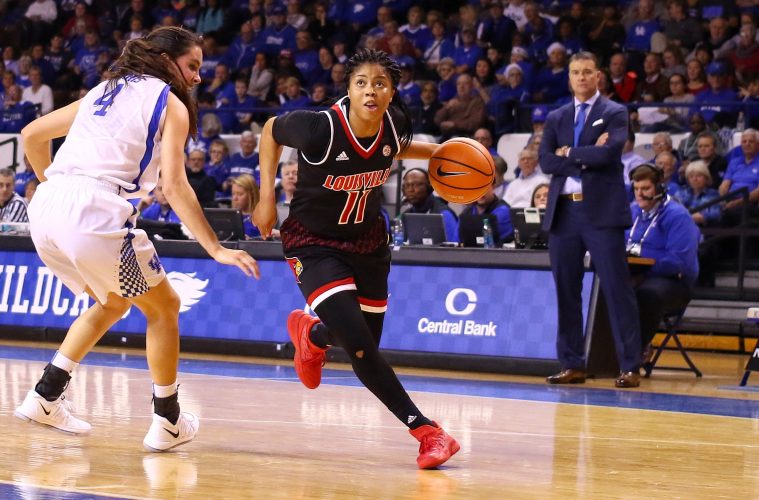 #5 Louisville Cardinals are back at the KFC Yum! Center on Sunday to face #19 Kentucky in the annual Battle of the Bluegrass.  It’s a 2pm clash you’re not going to want to miss if you’re a local fan.  Both teams are undefeated and ready to make a resume building statement.

The Cards will likely start their usual 5 vs the Cats… Asia Durr, Arica Carter, Jazmine Jones, Sam Fuehring and Bionca Dunham.  Asia is leading the team in scoring with 21.8, Sam is leading rebounder with 6.4.  The Cards’ leader in assists, Dana Evans with 4.8 and leading shot blocker, Kylee Shook with 1.9 both come off the bench.

UofL is 19-34 all-time against UK. The Cardinals are 13-11 at home and 2-2 at the KFC Yum! Center. Head coach Jeff Walz is 5-6 against the Wildcats. Louisville has won the last two games, prior to that, UofL had lost five straight and six of seven. Only two other times has UofL won three or more consecutive games against UK.

Kentucky is led by three double-digit scorers in freshman Rhyne Howard and seniors Maci Morris and Taylor Murray. Howard leads the team in rebounding with almost 7 and points with a little more than 18 per game.  Seniors Taylor Murray and Maci Morris lead the team in assists and points, respectively.  Morris is shooting 27-65 (.415) from deep.  The Cats scoring margin ranks 16th in the country while their turnover margin currently ranks first.

The Cards have scored over 100 points in the last two games.. I doubt either team approaches anything near 100 in this one as emotions and anticipation run high.  Seniors, Asia Durr, Sam Fuehring and Arica Carter are ready to go all out vs the Cats in their last rivalry game in front of the home crowd.

Promotions
Red Out: Put on all of the red Cardinals gear you can find and help create a sea of red for the Battle of the Bluegrass.

Kroger Pack the House: For the ninth consecutive season, Louisville will participate in the NCAA “Pack the House” Initiative. Fans can show their Kroger Plus Card at either ticket office location and receive a $4 ticket for the game

Family Scholar House Toy Drive: Fans can present a toy to the KFC Yum! Center ticket office window and receive a $4 ticket for the game.