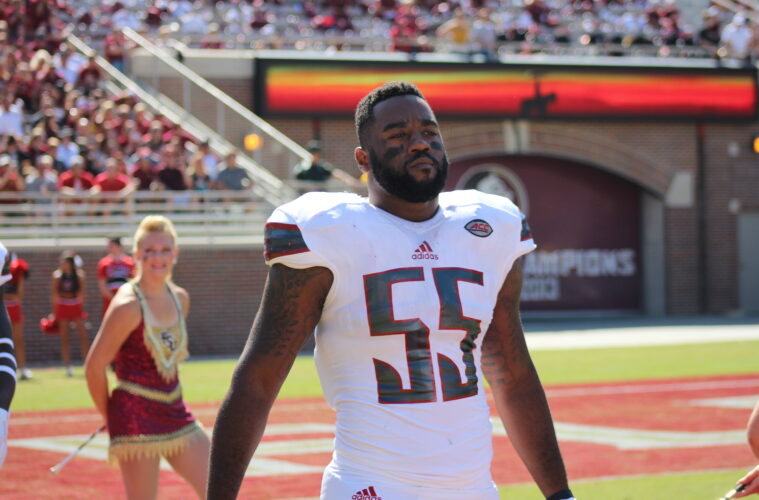 This group is lead by senior Keith Kelsey in the middle who returns after a 107 tackle season in 2015.  Kelsey was active in every practice we observed but has been a little banged up.  Keith looks more muscular than we saw him last in December and he’s working to build on his 2nd Team ALL-ACC Junior Season.  Kelsey is one of the main leaders of the team, not to mention the leader of the defense and his unit.

Stacy Thomas looks to fill the void of the beloved James Burgess.  Stacy filled in aptly in the Music City Bowl after Burgess’ targeting ejection in what has become a blessing in disguise as Thomas gained valuable experience for 2016.  Stacy has been in the mix of countless special teams plays and is the heir apparent to win the spot at MO.  We like the space that Thomas covers and we think he can step in and make plays on the ball in the passing game as well as stop the run.  A&M ran directly at Stacy for a TD when Josh Harvey-Clemons injured Stacy 2 plays prior on a tackle.  Thomas needs to learn to sub himself out there and not put himself in that spot.  That type of situational awareness is perhaps where Thomas needs to grow, but the kid can play.

Beyond Keith Kelsey & Stacy Thomas on the inside we have Isaac Stewart & Amonte Caban.  Stewart played in critical situations a year ago and has developed his body a little since last fall.  Stewart will back up Kelsey and appears to be ready in the run game, but does need to work on some of his coverages.  It’s clear that he is a willing learner.  Amonte Caban has REALLY gotten a lot bigger adding 22 lbs from his listed weight last fall to the Spring roster.  Caban can cover a lot of ground and while he may not be with the #1 group yet he’s going to make his presence felt on Special Teams right away and fans can be confident with his game when called upon.  The question for both of these guys that we won’t know until the Spring Game is tackling ability.  So we are excited to see that on Saturday.

On the outside Louisville has its two starters from last year back in Trevon Young & Devonte Fields……..but Young has missed the Spring following his hip injury in the Music City Bowl and Fields has been limited after surgery this off-season.   That has created a tremendous opportunity at Outside Linebacker and Jonathan Greenard & James Hearns have taken full advantage.  Greenard has that ‘look’ about him and when we watch him we feel that we are watching the beginnings of a really special football player.  Hearns seems to be finally fully focused and is playing outstanding football off the edge, particularly in pass rush.  James also moves up and puts his hand down on the defensive line at times in practice.  Greenard & Hearns together can be a menacing pair.

Henry Famurewa is coming off a torn labrum suffered last Fall.  Henry looked like someone who was going to factor into the rotation after last Spring prior to his injury.  We’ll have to wait until after Spring to see where Henry is once back to full speed, but he has participated during these drills and we will see him during the Spring game.  Finesse Middleton also has been valuable in spots but it’s unclear if he will crack the regular rotation in 2016.

Post-Spring Thoughts on Linebackers:  Devonte Fields will be back for Fall Camp and won’t have the ramp up time that it took in 2015.  We expect Fields to start strong and play like a 1st round selection in 2016 throughout the season.  The problem with the Linebackers is that Trevon Young (despite optimism from the coaches) has to be counted on as a longshot to return to action this season.  So UofL needs Greenard, Hearns, Famurewa and/or Middleton to play really well on the outside.

The Cards did buy some insurance at OLB when it landed the services of Gary McCrae.  McCrae is the same body type and style as Fields and originally signed with Georgia out of high school and instead played with East Mississippi CC.  McCrae gives UofL another option on the outside.  Tabarius Peterson also will be an OLB for the Cards and both incoming OLBs will have to come in ready in order to compete for a spot.

On the inside Louisville needs depth.  Behind Kelsey & Thomas is a lot of inexperience and unproven talent.  Tobias Little will come in to help, but as a true freshman playing inside linebacker for Todd Grantham there is an adjustment period.  Caban & Stewart will be counted on at some point to play an important role….they need to be ready.