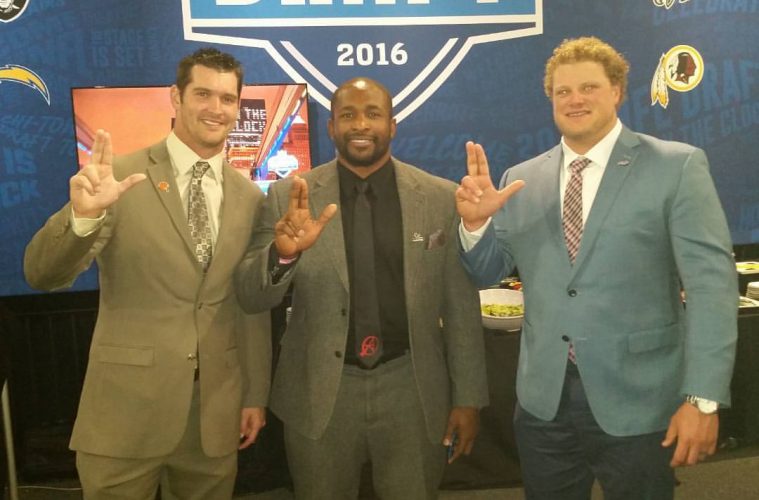 Amobi Okoye is THE Comeback Kid.

In March of 2013 Amobi Okoye’s life was turned upside down.  He had just finished working out and was preparing to travel to Miami for what was intended to be a fun weekend.  Then the first symptom struck of what would become a long and unexpected road:

The former Louisville Cardinal, 1st Round pick, and youngest player to ever be drafted into the NFL was now in a fight for his brain and his life.

Okoye went to the hospital where he was evaluated and tested while his condition worsened.  It took a series of doctors, 3 hospitals & results from a spinal tap to diagnose Amobi with anti-NDMA receptor encephalitis.  Seizures, aggression, confusion and other behaviors well outside of Okoye’s normal state followed.  Amobi would eventually be in a medically-induced coma for 3 months. The autoimmune syndrome was causing his brain to swell and the sometimes fatal disease had fully enveloped the NFL star.

Anti-NDMA Receptor Encephalitis is an extremely rare brain virus and was tabbed by doctors as “1 in a million” for a professional athlete in his 20s. Typically cases occur in women & young children.  The disease attacks the brain when antibodies produced by the body’s own immune system attacks the NDMA receptors (which control the electrical impulses of the brain).   The disease didn’t even have its own category until 2007.

Once the coma ended in July of 2013, the recovery was just beginning.  Walking, eating, speaking all had to be re-learned.  Names, faces, and memories were all scrambled.  Amobi Okoye had to learn how to be himself again.  Not to mention the physical toll that 3 months of lying in a medically-induced coma where the 6’2, 310 lbs Okoye had lost 80 pounds.

When Amobi Okoye arrived a Louisville to play for Bobby Petrino, he was a child prodigy.  He tested into the 9th grade as a 12 year old and committed to play football for Louisville when he was 14 over Harvard.  Petrino joked that he wouldn’t play the young star until he learned to shave, but quickly became the youngest player to ever play NCAA football. He graduated from UofL a semester early….his brain was his gift.

In August of 2014 Amobi was cleared to play football again and was picked up by the Dallas Cowboys reuniting with his former coach Rod Marinelli from his time with the Chicago Bears.  Okoye spent the 2014 season on the Non Football Injury List.  Amobi wasn’t cleared for contact drills until training camp (August)….and wasn’t allowed into contact drills until October.  The Cowboys had just 3 weeks to evaluate his progress after being out of football for 20 months.  Instead of activating Amobi to the 53-man roster the Cowboys kept him on the Non Football Injury List.  He was released for the 2015 season by Dallas.

Despite being released Okoye kept at his training and waiting for an opportunity.  This has been during a period of large scale education & sensitivity to football and its affects on the brain as related to concussions and CTE (Chronic Traumatic Encephalopathy).  Amobi Okoye had all the buzz words to scare away all 32 NFL teams:

But Anti-NDMA Receptor Encephalitis is a condition.  Its presence has nothing to do with trauma suffered by the brain during football.  Anti-NDMA Receptor Encephaliti is now cleared from Amobi’s body but that doesn’t mean that NFL teams aren’t collectively staying away from the 28-year old former 1st Round (#10 Overall) Pick in the NFL Draft due to the fact that Amobi Okoye had to beat a brain disease.

The Ottawa Redblacks and the Canadian Football League

Amobi Okoye is in the best shape of his life.  His brain is as sharp as ever.  And the Ottawa Redblacks of the Canadian Football League saw a rare opportunity to pick up a former 1st Round Selection with 6 years of NFL experience.  Okoye may have sat out the last 3 seasons of football….but he’s still 28 years old and has played 87 games in the NFL.

Amobi Okoye isn’t playing football for money, he’s fine financially .  He’s playing because a disease couldn’t permanently rob him of his mind and it’s the last step to making a full recovery from March 2013.

Through a text exchange yesterday Amobi told me about his chance to play football again: “It’s God’s Grace.”

Amobi Okoye may have had his biggest gift from God, his brain, directly attacked by one of the most rare and misunderstood brain diseases….but he’s still here.  He’s still Amobi, and he’s here to play football again.  The disease that sidelined him might be ‘1 in a million’ but so is Amobi.

And that’s why he’s the Comeback Kid.