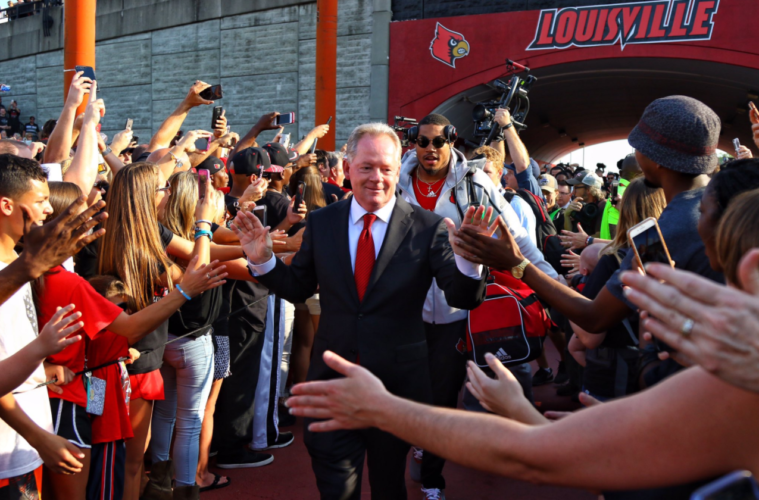 “Execution is created by constant repetition which establishes sound habit formation that creates a conditioned reflex to any given situation.” – Bobby Petrino

The Bobby Petrino Standard was not fully felt at the University of Louisville until he left the program; it only took one half of football before fans began to get restless.  Game 1 of the Steve Kragthorpe era (an era we’d all like to forget) Louisville was up 70-10 vs. Murray State and the fans booed a field goal attempt to push the lead to 73-10.

Those 73 points are still the most points ever scored in a single game in Louisville football history, but it wasn’t the outcome the fans were upset with……it was the manner.  This isn’t an article about Steve Kragthorpe…this is an article about “The Bobby Petrino Standard” and his brand of football.

Giving Kentucky What They Wanted

Bobby Petrino’s 1st game as a head coach was on the road vs. Kentucky in Commonwealth Stadium and was interrupted due to a storm.  Louisville was fresh off a disappointing season and was starting a no-name QB Stefan LeFors. With 6 seconds remaining the Cards were up 33-24 and ran the ball with Lionel Gates from 2-yards out to score and push the lead 40-24.  Kentucky’s Rich Brooks, fans, and administration howled and lambasted Louisville for not kneeling and allowing the rivalry game to be a 9-point margin, but rather the eventual 16-point finish.

A year later, Bobby Petrino and the Cardinals found themselves leading 28-0 with a little more than a play clock remaining and the ball at the 1-yard line and it was 4th down.  Kick the field goal?  Run it in for a Touchdown?  With all of Papa John’s Cardinal Stadium chanting “GO GO GO!” Bobby Petrino instead of giving his fans what they wanted, gave Kentucky what they had requested a year prior.  When asked about the knee in post-game Petrino responded, “I thought I’d just give them what they wanted.”

A few years ago on CardChronicle two former student-managers recount their stories about Petrino and Kentucky and from that post was born a new nickname for anyone who reps Kentucky.

Don’t Jump on the Bird

Beginning in 2004 a strange phenomenon began to develop at PJCS….opposing teams began to have team huddle ‘jump sessions’ in pre-game prior to heading into the locker room for the final time.   The Bird is a protected entity within the locker room and football facility.  No one walks on the logo.  It doesn’t need ropes to protect it, Don’t step on the bird is understood.

South Florida started things off in 2004 and was throttled 41-9.  Mark Dantonio’s 1st Cincinnati team came to PJCS in 2004 and proceeded to disrespect the Bird…..Louisville returned the favor by disrespecting the Bearcats 70-7.  In 2005 Oregon State tried it and took the long way home 63-27, later Rutgers’ ‘fake juice’ wasn’t enough 56-5.

But things reach their pinnacle during pre-game of 2006 Louisville vs. Miami when the “U” decided to taunt the entire Cardinal roster and “Stomp the Bird”.  A famous shoving match ensued at the 50-yard line and the Cards dispatched the Canes 31-7.  After the game Petrino visited with Paul Rogers in his post-game radio show “They disrespected us, they disrespected football, and they got what they deserved.”

Last year in the final game of the regular season, Kentucky didn’t quite Stomp on the mid-field logo but rather did invade Louisville’s territory with players who were out of uniform in an attempt to provoke the Cardinals while they were warming up.  Two scuffles ensued and another famous Petrino picture of the Cardinal Head Coach grabbing a Kentucky assistant coach by the collar.

No one prepares for a game like Bobby Petrino.  Players from Louisville, Arkansas, Auburn, Jacksonville, and Western Kentucky all routinely marvel at Coach Petrino’s ability to identify and exploit defenses.  In the 2004 game vs. Cincinnati, Petrino famously told his team that if the Bearcats showed a certain look Eric Shelton would score on the 1st play:  And he did with an 80-yard TD run.

Bobby Petrino is 50-13 in 5 seasons at Louisville.  7 of those 13 losses are by SIX OR FEWER points and includes 4 Overtimes.  It’s hard to beat the Cards under Petrino and last season was a great example with UofL letting Virginia and Clemson off the hook, and then Florida State having to create its largest comeback in school history to beat UofL.

Petrino is meticulous both in the film room and in practice.  Every detail is covered. How players move from drill to drill, how they drink water, hand placement, ball security, angles, timing, technique.  It all matters.  Petrino is always teaching even on special teams.  There are stories former players like to tell when the defense was doing well against a particular play and Petrino would order that play run over and over and over until the offense was finally able to execute even with the defense knowing the play was coming…..AGAIN.

Petrino told us in the 1st Press Conference of Fall Camp what the Bobby Petrino standard is: “Execution is created by constant repetition which establishes sound habit formation that creates a conditioned reflex to any given situation.”

It’s about pride, it’s about swag, it’s about putting in hard work until each and every person within the program reflexively knows what is expected and how to get it done.  In Year 2 of Bobby Petrino 2.0, the Cards have a lot of questions related to personnel.  The more we talk to Petrino, the more comfortable and confident he appears.  Louisville will by no means be a finished product in 2015 but fans should be able to expect movement in the direction of “The Bobby Petrino Standard”….and that’s great football.