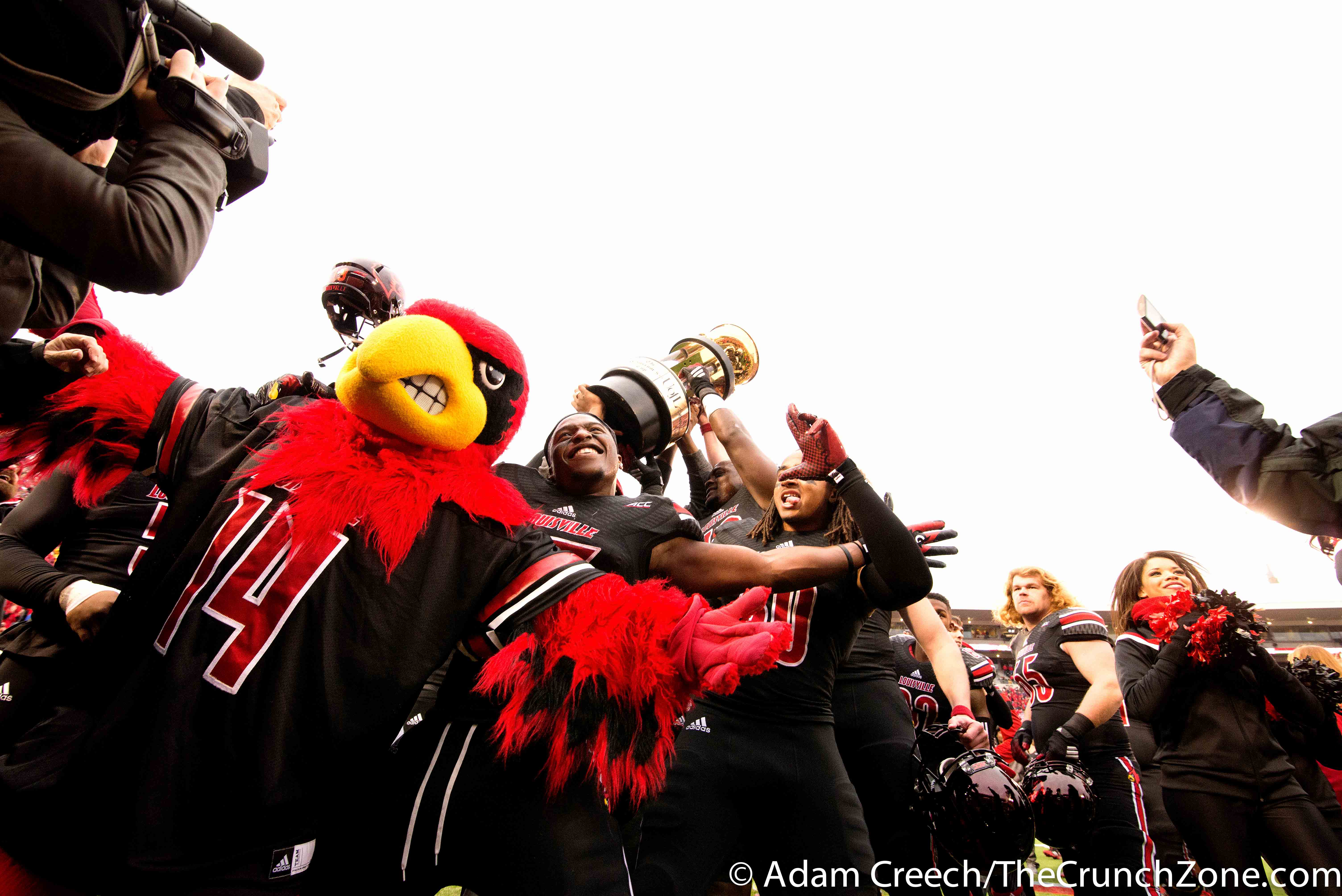 Why Louisville Has A Shot

Given the records and stats it seems like it’s a ‘layup’ for UK to notch its 9th victory of the season.  HOWEVER, there are some areas of opportunity the Cards might be able to take advantage of if they hope to pull the upset (Cards are presently underdogs by 17).

Kentucky’s defense is ranked 26th in the country in Total Yardage and 12th in Scoring.  But they haven’t been playing like the same group lately.  444 yards & 34 points to Georgia isn’t that big of a deal.  But giving up 412 yards and 24 points to Tennessee (120th in yardage & 106th in points) is startling!  Following that up with 463 yards and 23 points allowed to MIDDLE TENNESSEE (80th in yardage & 65th in points) should be cause for alarm for UK fans.

In order for the Cards to take advantage of Kentucky they will have to be balanced and efficient WITHOUT Bobby Petrino on the sidelines.  Last week the Cards floundered against one of the worst passing defenses in the country while Jawon Pass was suspended for the 1st quarter (and UofL elected to not play him for much of the game).  If the Cards can find offense similar to how they played Wake Forest, Georgia Tech or Florida State…….. MAYBE they can take advantage of a defense that is showing some diminishing returns.

Quarterback is also an interesting angle.  Kentucky struggled mightily containing running quarterback Lamar Jackson from 2015-2017 (562 yards in 2017, 561 yards in 2016, 489 yards in 2015) so the Cards should at least try to replicate the style with Malik Cunningham at times to see if they can gain some traction that way.

Another area of good news is that Louisville’s punt return unit is a great match-up for the Cards against the Cats punt return defense.  The Cards have had several long returns in 2018 and the Cats have given up several exceptionally long ones.  This might be an area to spark the Cards and get on the scoreboard.

(This section has intentionally been left blank)

Seriously Louisville’s defense has been awful in 2018.  The Cards have already allowed a school record 473 points in 2018 (previous record was 429 points allowed in 1985) and with 371 yards allowed Saturday the Cards would tie the most yardage allowed (5572 yards in 2003) in a single season….. and that’s without a bowl game!  So to say that there is any rational reason why Louisville’s defense can be a reason that the Cards can beat Kentucky Saturday would be a major reach…….

In order for Louisville to beat Kentucky they will have to stop the run.  There isn’t a lot of evidence that the Cardinal defense would suddenly find its backbone BUT if somehow that does happen UofL has a shot.  The Cats are one dimensional on offense and don’t scare anyone throwing the football.  If Louisville has any advantage at all is its secondary is a great match-up for the UK passing game…… but very few teams have had to do much more than run the football in 2018 against the Cards so this is (like the odds for the Cards) a long shot.

One thing UofL could take advantage of in this game (if they can keep it close) is Kentucky’s field goal % ranks 126 of 130 in college football).  Kentucky has hit just 7 of 13 field goals in 2018, so if the Cards can find stops in the Red Zone they may get away without any points.

Speaking of the Red Zone Kentucky actually has been in the Red Zone LESS than Louisville in 2018.  Just 30 trips there for the Cats in 2018 (UofL has been there a paltry 34 times).

Why Kentucky Should Win

Before we get into the breakdowns it’s important to note that the Cards are one of the most penalized teams in the country and LAST in turnover margin & LAST in Opponent 3rd Down %.

Ultimately the best way to beat Louisville in 2018 is very simple:  RUN THE FOOTBALL.  Kentucky has Benny Snell.  The Cards give up 271.55 yards per game on the ground.  Even if we could eliminate the Georgia Tech game where the Yellow Jackets amassed 542 rushing yards opponents are still averaging 244.5 yards per game (would rank 122nd).  Good rushing teams beat Louisville.  The Cards are not physical at the point of attack and are generally confused about responsibility and don’t trust one another in the front seven.  Would be surprising if Kentucky had to do much more than just run the ball.

THIS is the biggest advantage in the game. But there are certainly others.

The Louisville defense doesn’t get tackles behind the line of scrimmage.  They don’t get sacks.  They don’t stop teams from scoring, they don’t tackle, they don’t win the point of attack, they commit too many penalties, they don’t create turnovers, they are last in passes defended, and are absolutely last in opponent 3rd down %.

Louisville hasn’t exactly lit up the scoreboard this season.  Now they will have to improve on the 20.6 points per game they are currently producing without Bobby Petrino.  Not likely against Kentucky’s Defense allowing 16.8 points per game.

Louisville is unlikely to run the ball against ANYONE with a running back.  So the Cards best chance to win is through the air in general…… and Kentucky has the 27th best pass defense in the nation.  Louisville turns the ball over too much and they rarely enter the Red Zone.

In summation Kentucky Football has flaws.  But Louisville has been train wreck in 2018. It’s highly unlikely that THIS Cardinal Football team will be able to take advantage of the areas of opportunity against UK.  The only thing that remains in doubt is whether or not Kentucky becomes the 7th team in a row to cover the spread against UofL. The Cards are 1-11 against the spread in the last 12 games.  They are 6-23-1 ATS in the last 30 games.