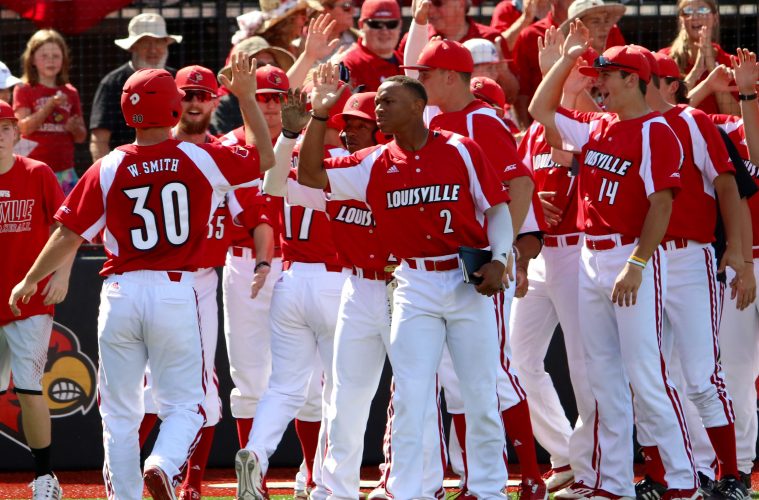 School Record 3 Players Drafted in 1st Round of MLB Draft

The University of Louisville baseball program had a record-setting opening night of the 2016 Major League Baseball First-Year Player Draft as four Cardinals were chosen in the first 62 selections, including three first rounders.

Junior outfielder Corey Ray became the highest draft selection in program history going fifth overall to the Milwaukee Brewers. He was joined in the first round by junior righthanded pitcher Zack Burdi, who went 26th to the Chicago White Sox, and junior catcher Will Smith, taken 32nd overall by the Los Angeles Dodgers. Junior infielder Nick Solak was the fourth Louisville player chosen after the New York Yankees made him the 62nd pick in the second round.

Thursday marked the first time the Cardinals had multiple players chosen in the first round of the MLB Draft. Overall, the four selections for Louisville during the first two rounds ranked as the second highest total for any school behind only Florida with five.

A two-time All-American and All-ACC outfielder, Ray is hitting .319 with 15 home runs, 60 RBI and 44 stolen bases while starting all 62 games this season. The first top 10 pick from Chicago since 1989, Ray has 16 doubles, 55 runs scored and 35 walks as the everyday leadoff hitter for the ACC Atlantic Division champion Cardinals. During his three-year collegiate career, Ray has a .322 batting average with 27 home runs, 133 RBI and 82 stolen bases in 170 games played, including 146 starts.

A native of Downers Grove, Illinois, Burdi has 11 saves this season with 46 strikeouts and just seven walks while routinely registering 100 mph on the radar gun during his 28.2 innings pitched and 26 relief appearances this season. A two-time All-American and All-ACC honoree, the hard-throwing righthander ranks second at Louisville with 20 career saves to go along with an 8-3 record, a 1.98 career ERA and 82 strikeouts in 68.1 innings of work for the Cardinals.

A Louisville native and a product of Kentucky Country Day, Smith enters the second week of the postseason hitting .380 with seven home runs, 43 RBI and 40 runs scored in 44 starts behind the plate. Serving as the Cardinals’ primary catcher in each of the last two seasons, the 2016 All-ACC selection has thrown out 12 of 26 baserunners during his junior campaign. Overall, Smith has 112 collegiate starts while playing in 149 games for Louisville.

The No.2 national seeded Cardinals (50-12) open the 2016 NCAA Louisville Super Regional against UC Santa Barbara on Saturday at noon ET at Jim Patterson Stadium and the game will be televised on ESPN2.