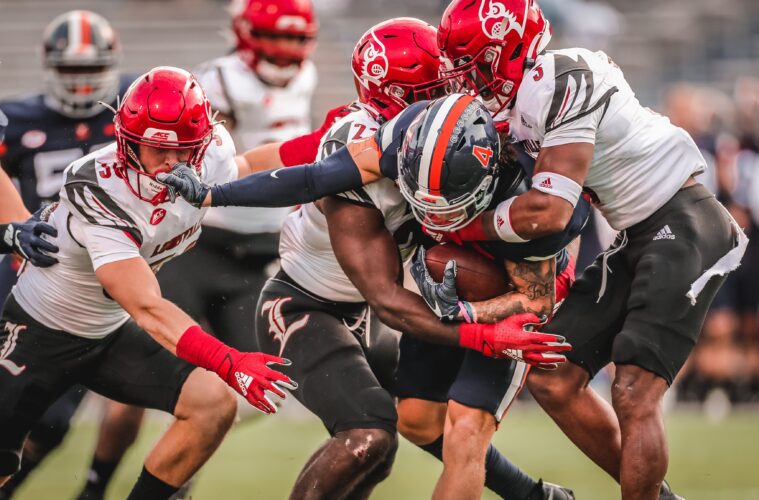 The Louisville Football team turned itself over enough times to let a below average Virginia team get an early advantage and ultimately beat the Cardinals.

Louisville was without several key players in the game due to COVID or injury OUTs: Javian Hawkins, Tutu Atwell, Hassan Hall, Tabarius Peterson, Chandler Jones, Yaya Diaby and Derek Dorsey were all out. UofL had multiple players out versus Virginia Tech as well. Now the Cards are 2-6 and have 3 games remaining in its 2020: Syracuse, Boston College and Wake Forest.

In those remaining games turnovers, penalties and not scoring will lead to more losses.

At this point Louisville needs to stop accepting its mistakes and the excuses that come along with this unique season. We know players are going to be out and will miss games. That’s something that everyone understood going in. It’s how you deal with those mistakes and how much you let those excuses affect you that really make the difference between a team that can handle adversity and a team that can’t.

To this point, Louisville had no excuses in its losses to Pittsburgh and Georgia Tech. Those are two sub-par teams that Louisville ‘should’ be better than. But they allowed Pitt’s pass rush to dictate that day and the Cards didn’t value the ball enough to win vs. Georgia Tech.

In the last two games, yes, Louisville had important players OUT. But it was a lack of offense early, a 21-0 deficit and turnovers overall that sunk the Cards at home against Virginia Tech (and no offensive players out that day). And then it was turnovers again vs. Virginia. Louisville got a good number of players back from COVID (some didn’t practice all week) and then Louisville didn’t have Hawkins, Hall and Atwell…….. but they still made plays….. and then gave plays back.

In the end Louisville Football just isn’t playing winning football. COVID or not COVID you can’t have ill-timed personal foul penalties, turnovers after turnover after turnover, getting to 3rd & Long on Defense and allowing conversions. Louisville is ABSOLUTELY LAST IN TURNOVER MARGIN at-12.

Its not winning football. It’s not acceptable and it’s time Louisville Football got mad with itself and stopped letting excuses determine their outcome.

Virginia is possibly average and they beat Louisville by 14.