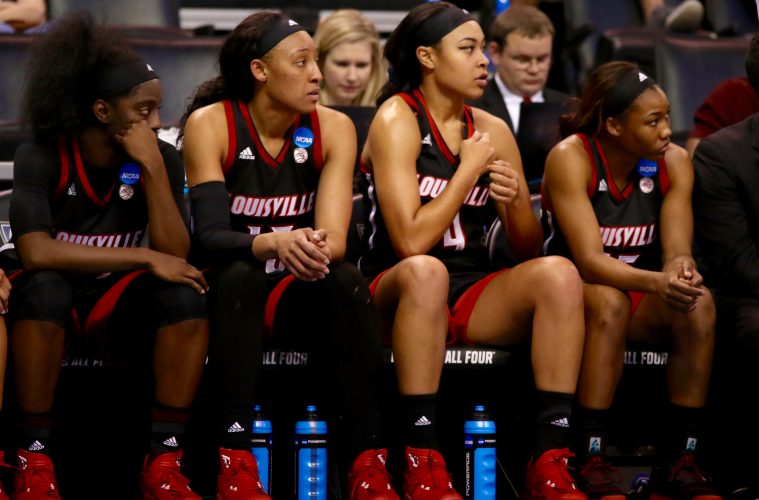 RECAP: Cards bear down to Baylor in Sweet 16

Till next year, #cardnation… Basketball is officially over in the Ville.

The Cards fall to top seeded Baylor 97-63 in the Oklahoma City region.  And when I say ‘fall’ I mean an absolute free fall with no breaks for the Cards.  Coach Walz said “This was not the ballclub (he) had seen over the last month. (Louisville) Did not play well, Baylor did.”

From opening tip and the first play of the game, it was all Baylor.  Walz, “We got them to take the shot we wanted, they missed, we didn’t box out and it end up in a layup.” Louisville looked shaky and outmatched on the court.  In the first quarter, Louisville shot just 25% from the field… Baylor, 58.8%.  Not a championship start for the Cards, which would be necessary for Louisville to take down the Bears.  The two Card guards, Mariya Moore and Asia Durr went 1-11, 0-4 on 3 point attempts and the ball was turned over 4 times as a team in the first 10 minutes of play.  Baylor scored 8 points off turnovers and 14 were in the paint.  Louisville a season low, 9 points in the first quarter.

Coach Walz said he felt good going into halftime after the second quarter wrapped up. Louisville outscored Baylor 22-18 in the second quarter (not enough for the lead, however). Both teams shot 38% from the field, Louisville drained 4 triples, Baylor just 1. Jasmine Jones came off the bench and managed 4 points, 3 rebounds in just 7 minutes.  Beatrice Mompremier came off the bench for the Bears and went 4-4 for 8 points and 7 rebounds in the same amount of time.  Louisville went into the locker room down just 12 points to Baylor 31-43.  “Hey its a 12 point game, people. They had it at 18, were able to pull within 12 (10 at one point) we just have to get a stop-score-stop.”

Up to this point, I hadn’t even mentioned Baylor senior forward, Nina Davis. She would earn all of her 21 points by the end of the third. Coach Walz called her a key piece to the Baylor puzzle and extremely crafty.  Louisville’s game plan to double team the ‘big kids’ (Brown and Mompremier) opened the floor for Davis to put the ball in the basket at ease. She finished 10-15, 7 rebounds and 2 steals.

Asia Durr also finished with 21 points, but connected just 6-21 from field goal range, 5-10 three point attempts and turned the ball over 4 times. She set the program’s single-season record on made 3-pointers, at 119.

This would be the last game for seniors, Cortnee Walton and Briahanna Jackson.  Taylor Johnson was a 5th year player.

The Cards are returning the core of this year’s squad, Asia Durr, Myisha Hines-Allen and Mariya Moore for the 2017-18 campaign.  Coach Walz also mentioned how much emphasis there is on having a ‘big kid’ in the game and he’s ‘excited for what freshmen Kylee Shook and Ciera Johnson can turn into’.  Both the ‘biggest’ on the team at 6 ft 4 in.

Following the post-game presser I caught glimpse of what could be considered the last coaching moment for the 2016 season… Coach Walz facing Asia Durr in the hallway with firm direction and they both walked away with arms around the other’s waist as they disappeared under the rafters.

Congrats to Coach Walz, seniors and the 2016-17 squad on the 29-8 season.  Follow the team on twitter @UofLWBB and me @darylfoust4

Till next time and as always, Go Cards Go!