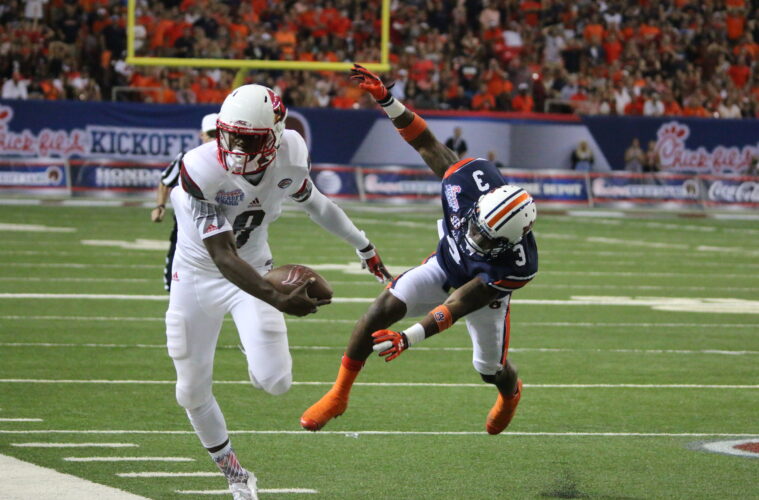 Youth Movement
Louisville played and started a HUGE number of true freshman, redshirt freshman, and many other players who had never played a game of major college football. More than even we at TheCrunchZone were expecting. Given that, it’s impressive that Louisville was able to hang around with a Top 10 team like Auburn. Especially when you consider that Louisville brought in 5 JUCO offensive lineman to provide an immediate boost…and not a single one of those players started on the O-Line.
The young receivers were great, Geron Christian really held his own in his 1st ever action, and it just took the new kids time to settle in and begin playing football.

Gifting Mistakes
The 1st play was a timing mistake that forced an error for a player (Lamar Jackson) who had never taken a college snap before. Teddy Bridgewater also threw an INT in his first career pass, but I do think that Petrino may have been too anxious to show off his new star and might have started with a more traditional or conservative approach to allow all of his new players time to adjust to the speed of the game and not put his defense in a tough spot 1 play after kickoff.
Then Louisville had a nice drive only to get 2 false starts in the redzone after getting the ball to the 6-yard line. Later a protection SNAFU allowed an Auburn DT to meet the Running Back at the handoff causing a fumble for a scoop & score. The lack of pursuit on the fumble (on a running play) is concerning. Devonte Fields’ offsides hurt too.

Jeremy Johnson Loves the Cards
Watching Jeremy Johnson in the Georgia Dome, there was concern for the 30,000+ Cardinal fans sitting in there watching. Johnson seemed determined to hit everyone in the building wearing Cardinal gear with a football. Louisville should have had 7 Interceptions on Saturday. As it turned out the Cards only left the Georgia Dome with 3. We saw a similar outing in last year’s loss to Florida State, and if UofL hadn’t given away an early lead Jeremy may have been asked to throw more….and create more picks.

Louisville Settled Down
The Cards settled down and started playing football in the second half. That’s a good sign for the future. Brandon Radcliff and the offensive line also never stopped fighting despite a plethora of reasons to lay down. Even though there wasn’t enough time to complete the comeback the Cards learned about themselves against a good opponent. There is a still a lot of football to be played, including all of the conference. Houston in 6 days and Clemson in 11.

Lamar Jackson is a Star
Bobby Petrino talked at the ACC Kickoff about players who elevate their game when the lights go on. I think the staff has seen a great deal from Lamar Jackson in practice, but his moxie and ability to evade tacklers while keeping a play alive is unparalleled. With the way the offensive line was playing early, Louisville’s best chance to win is with a fearless player (who played in similar circumstances in High School btw) who has the skill set of Lamar Jackson. Lamar is RAW. There is no way at all that he can be fully aware of this offense OR have a full understanding of collegiate defensive concepts. However, he has a natural instinct. The coaches seem willing to allow him to learn from his mistakes and accelerate his growth. This process won’t come without difficulty, but it will be worth it.

Offensive Line Needs Work
How’s that for a bullet point? Basically, you can’t have one player per snap doing an ‘About Face’. Especially at Center and Guard. Things got better as the game went on and that’s encouraging, but the Cards have to be able to hold the point of attack long enough to at least allow the QB to hand the ball off to its running back or to step into a throw. Some people were asking on Twitter where Will Gardner or Kyle Bolin were and if they could enter the game…… Bobby Petrino can’t take out enough liability insurance if the O-Line continues to play that way. Kyle is more mobile than Will, but no pocket passing QB can flourish without a pocket.

Defense
The defense played wonderfully in the 1st half in tough circumstances. The D gave up a field goal possession in the 1st half….and it’s Auburn. So keeping them off the board is a challenge for any team. However, the crew came out flat after halftime and allowed an easy score to open the half and the 2nd TD of the 2nd half also was a long drive. That’s not the standard of the Louisville defense and it seemed like they didn’t have the same fire and were frustrated with the tone of the game. It’s understandable, but without those two scores Auburn doesn’t win.

Overall
This was a great learning experience for the Cards. The offense put the defense in a bad spot early, the defense played well but bottomline….. Louisville wasn’t ready on offense, they found solutions too late and Auburn was happy to burn the clock in the 2nd half.