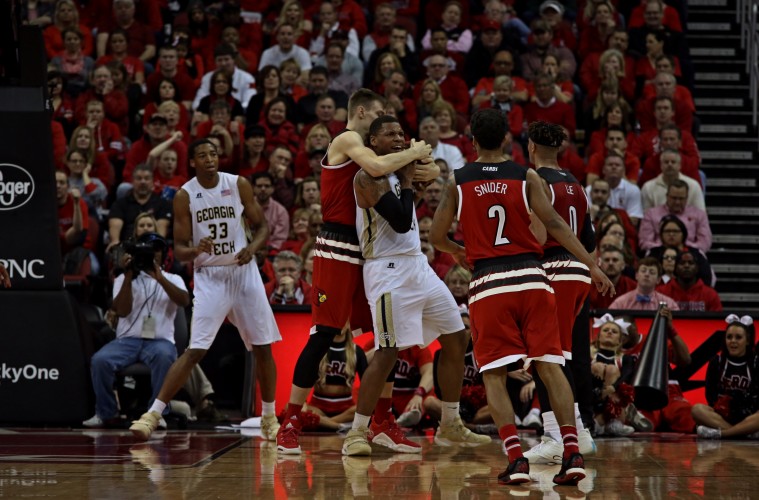 In January this was a really tough game for Louisville to win in Atlanta and the Yellow Jackets played the Cards to a 4-point decision.  Marcus Georges-Hunt was outstanding and Nick Jacobs was too much to deal with inside.  Vegas says Louisville is an -11.5 point favorite…..that’s probably too high considering how well GT has been playing lately.

Last time out, the Yellow Jackets out rebounded Louisville 41-33 but was one of the few teams this season to foul more than UofL.  If Georgia Tech continues to win the glass and commits 3-4 fewer fouls tonight, GT can win this game.

Louisville shot the ball really well collectively in Atlanta and that should continue again.  Deng Adel & Ray Spalding both played a combined 10 minutes vs. GT, their games improved considerably since January.  Getting Ray & Deng’s length on the floor will not only help out the rebounding margin, but defensively against Marcus Georges-Hunt.  But it won’t matter how long a player is if Damion Lee/Trey Lewis don’t stay in front MGH and disallow him from getting into the paint.

Additionally Quentin Snider has also really elevated his offensive game (particularly from 3) which will help a great deal in spreading out the GT defense.  The more Q can have Adam Smith chase him around on defense the less of a weapon Smith is from behind the arc (40.8%).

I expect UofL to play well tonight for Senior Night but Georgia Tech is no push over squad.  This game isn’t on their floor this time and the crowd for the Cards is going to be relentless which will provide a unique atmosphere.  Louisville wins this game.