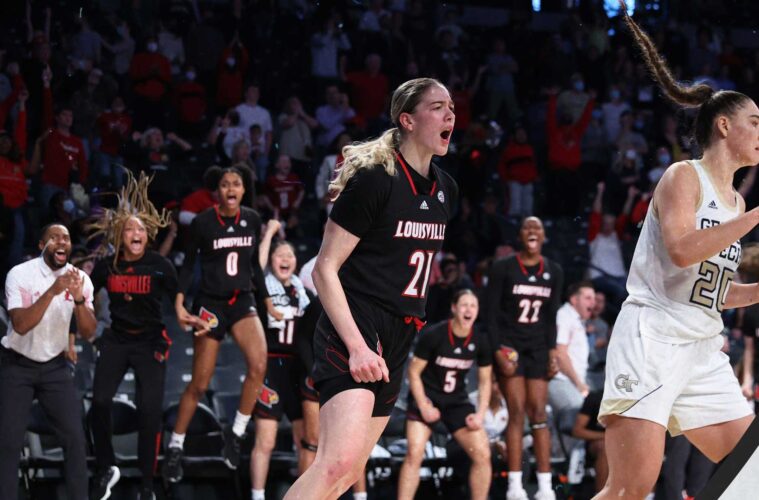 No.3 Louisville Wins On The Road At No.16 Georgia Tech

The No.3 Louisville Cardinals came up with a big win on the road at No.16 Georgia Tech this afternoon. They’ll leave Atlanta with a hard fought 50-48 victory and few things to work on when they return home.

There’s no way to sugar coat this and I’m not even going to attempt to… Louisville’s offense in the first half, specifically in the first quarter, was atrocious. The Cards went 1-12 from the field in the first quarter and scored just 3 points. They managed to find 17 points in the second quarter, but things were still sloppy for the No.3 team. Louisville found themselves at 2-10 on free throws and 4-9 on layups on top of 8 first half turnovers. The Cards did not have a lead for the entire first half but did tie the game on a 3-pointer at the halftime buzzer from Ahalna Smith. Georgia Tech and Louisville have some of the best defenses in the country and despite Georgia Tech having only 7 players available, they were still playing good defense. The Cardinal defense was the only thing keeping this game from being a blowout in the first half. They were rebounding well and had 6 first half steals and capitalizing off Georgia Tech’s 14 first half turnovers.

Things got spicy in the third quarter when Louisville saw their first lead of the game. I’m not sure what sort of talk the officials had at halftime, but they collectively decided they would come out and call everything on Louisville. Jeff Walz saw his first technical of the season after hammering an official to review a foul where Mykasa took an elbow to the face. It was back and forth between Louisville and Georgia Tech and at times, being behind 2-3 points felt like 10. The Cards were much better from the free throw line in the second half with 5-6 and found some offense and 45.8% from the field. Hailey Van Lith turned it on in the fourth quarter and tied the game with 35.4 seconds to go. Louisville got the ball back with 20 seconds left after Georgia Tech missed a three-pointer and Olivia Cochran came up with a big defensive board. Out of the timeout, the ball found itself in Emily Engstler’s hands and she was able to make a driving layup with 2 seconds remaining.

In the postgame press conference Coach Walz said the plan was to always give Emily the ball on the last play stating you don’t want to get beat twice on the same play. He said he was really pleased, and that Hailey really sold the play. He went onto say the team’s experience is a big part of what makes them different.

Coach Walz also stated that they need to play much better first quarters. He knows it was not a beautiful game for TV if you wanted offense, but it was a beautiful game defensively. He knows they had some good looks in the first half, they just couldn’t get the ball to go in. He gives a ton of credit to Olivia Cochran in her play today.