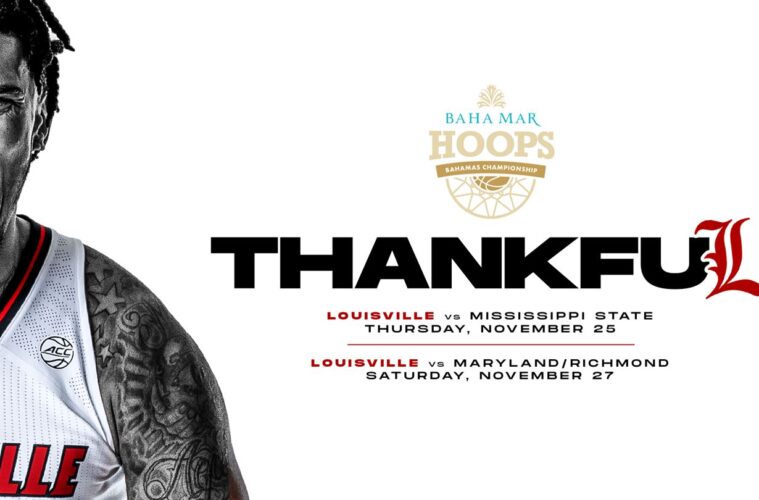 The University of Louisville will face Mississippi State in the first round of the Baha Mar Hoops Bahamas Championship on Thanksgiving Day, Thursday, Nov. 25, at the Baha Mar Convention Center in Nassau, Bahamas.

Maryland faces Richmond in the other game of the four-team Bahamas Championship.  The two winning teams will square off on Saturday, Nov. 27 in the title game, with the other two teams playing in the consolation game that day.  Game times and television will be announced later.

The quartet of teams is among 19 men’s and women’s programs who will participate in the “Baha Mar Hoops” event from Nov. 22-27 across three events during the Thanksgiving week at the Baha Mar Convention Center.  The Baha Mar Hoops Nassau Championship and Pink Flamingo Championship are the other two events of the week.

Maryland (17-14) reached the 2021 NCAA Tournament second round and is led by All-Big Ten guard Eric Ayala, the Terapins top scorer last season when he averaged 15.1 points, 4.3 rebounds and 2.2 assists per game.  Forward Donta Scott led Maryland in rebounding (5.9 rpg) and was third on the team in scoring (11.0 ppg).

Richmond returns 15 of its 16 players from its 2020-21 roster when the Spiders reached the quarterfinals of the NIT with a 14-9 record.  Among the returnees are four career 1,000-point scorers in forward Nathan Cayo, guard Jacob Gilyard, forward Grant Golden and guard Nick Sherod.

The Cardinals had planned on participating in a multi-team event in New York’s Madison Square Garden in November, but UofL opted to play in the Bahamas after a scheduling issue with the MSG event.

Ticket & Hotel Information
Tournament passes are now on sale and fans also can book rooms at Grand Hyatt Baha Mar at the tournament rate, starting at $245 nightly, by visiting www.bahamarhoops.com. Fans can follow, like and interact on social media at @BahaMarHoops and using hashtag #BahaMarHoops.

Baha Mar opened in 2017 and is home to three iconic brands: Grand Hyatt, SLS and Rosewood. Situated on 1,000 acres overlooking Nassau’s famous Cable Beach, the resort destination features more than 2,300 rooms and an abundance of dynamic programming, activities, and amenities including the largest casino in the Caribbean, a state-of-the-art convention center, an 18-hole Jack Royal Blue Golf Course, the Caribbean’s first and only flagship ESPA spa, a collection of more than 40 restaurants and lounges, and more. The $200 million luxury water park, Baha Bay debuted in July 2021 as the latest addition to Baha Mar’s portfolio of spectacular guest offerings. Set on 15 beachfront acres, Baha Bay has introduced an exciting array of aquatic activities and experiences, alfresco dining, a gaming pavilion, beach club, and more.