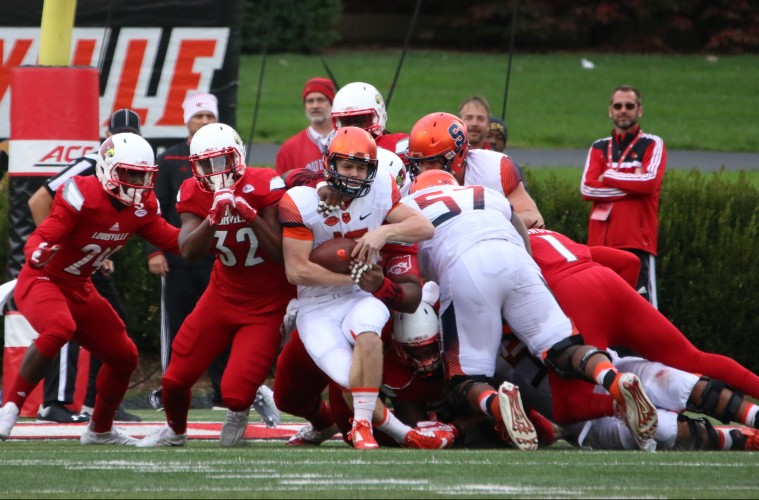 Bobby Petrino is going to be tough to beat in Year 3 at Louisville with the defense that he has and Lamar Jackson at Quarterback.  The Cards should be competitive in every game they play this year.  Syracuse on the other hand is in transition with 1st year coach Dino Babers.  Syracuse’s defense wasn’t ready last year vs the Cards & Kyle Bolin at Quarterback there isn’t much there to believe that the Orange will do much different this year vs. Lamar Jackson.  Offensively Babers wants to push the pace with Eric Dungey with a fast temp with a goal to move the chains and tire down a defense.  It’s a good strategy if the offense is capable of moving the ball…..but this is Louisville’s Defense.  A defense that returns a lot of talent that could have gone to the NFL after last season and a perennial Top 25 Defense.  A quick snapping offense just means that they’ll be off the field faster vs. a capable defense…..And when the Cards get the ball it’s Lamar Jackson and the new Louisville offense taking the field.

Syracuse isn’t ready in Year 1 of Dino Babers.  I’d caution folks to remember 2012 Louisville vs. Syracuse when the Orange stunned the Cards and in 2006 when the Orange took another very good Cardinal Football team to the wire.  The Carrier Dome is a tough place to play, but I just don’t think Syracuse has the personnel yet to match what Coach Babers is hoping to do.

Louisville’s Defense will be challenged through the air on Friday night.  Dino Babers & Syracuse QB Eric Dungey aired it out last week vs. Colgate in a 33-7 opening season victory.  The Orange amassed 554 yards, only 117 of which were on the ground for 35 of Syracuse’s carries.  The Orange threw 46 times last week in their opener.  Dino Babers comes from Bowling Green who had the #4 Offense in 2015 with 5135 yards passing and 2520 yards rushing.  So Dino’s offense is heavily weighted towards the pass.

Bobby Petrino spoke on Monday at his press conference about the speed at which Syracuse will line up and snap the ball, “That’s one of the things they brag about, is how fast they go. We’ve got to see if all of that’s legal because there’s a few times they’re snapping the ball and the down markers haven’t even been moved yet. So we do need to check in to that and see how that works.”

Todd Grantham echoed that sentiment following Tuesday’s practice but shrugged it off as part of the process of a season, “No, that’s college football. We’ve played fast paced teams before and we’ll play them again. I mean, it is the way college football is and we understand that. We know as soon as we make a tackle, we need to get lined up and go play, so we will deal with it.”

Syracuse is going to push the pace vs. Louisville….it’s what they do.  Last year at Bowling Green Dino Babers ran the second most plays in the country behind only Clemson who played an additional game. If the Orange can move the chains and get 1st downs it will put a lot of pressure on the Cardinal defense to play at a high pace for a longer period.

On the flip side to that, if Louisville plays fast/fundamental football the pressure could come back onto Syracuse to become more deliberate and slow their pace down so they aren’t in a rush to punt.  Rotations will be hugely important as Syracuse will attempt to exploit any personnel mismatches that may occur while substituting AND in alignment.   If the Orange find a weakness they’ll try to move the entire drive down the field without subs to take full advantage.

The Cards are very well-equipped to combat this type of offense.  UofL & Grantham have been working on and utilizing the DIME defense for week’s now to combat the spread offense and it just so happens that Louisville’s best 11 players manifest themselves in the DIME.  Additionally, while UofL did play haphazard Charlotte last week the 49ers did run some of the same concepts.

Syracuse will use a lot of different running backs…but they really don’t use them much in the passing game for receptions.  Moe Neal was the most productive with 9 carries for 68 yards (one rush for 49)…..which should tell you something about Syracuse’s rushing attack if 49 yards of 117 yards rushing came on a single carry (out of 35) against Colgate. Quarterback Eric Dungey is also known to escape the pocket and gain some yardage (think Dave Ragone production).

As such most of Syracuse’s offense is going to come from the air.  Louisville Cornerback Trumaine Washington had a field day vs. Syracuse a year ago and this style of offense is perfect for both Trumaine and Jaire Alexander.  The Orange don’t challenge often deep, but do force the defense to make tackles in space… and that’s Jaire & Trumaine’s best quality.  Additionally we’ll probably see a great deal of work for Zykiesis Cannon due to his tackling ability as well.

The two main targets for Syracuse will Amba Etta-Tawo (6’2, 202) & Ervin Phillips (5’11, 176).  Etta-Tawo caught 12 balls for 210 yards vs. Colgate and Phillips added 14 catches for 87 yards in Game 1.  These two provide a nice contrast in style and they do a good job of getting open in short routes for Dungey to deliver the football.

Overall, the Cardinals will need to lineup and play accountable football in order to set the tone against the Orange in the Carrier Dome….and it’s really too early to really tell how far along Dino Babers is in his installation of his offense in Year 1.  Louisville is a top defensive unit that will have its pass rush silenced due to the quick release tactics that Syracuse will employ.  The Cards must cover the entire field and tackle with confidence.

Louisville’s defense is DEEP, TALENTED and EXPERIENCED.  It’s going to take a well-oiled machine to reliably create offense against the Cards in 2016 so at this point UofL has the presumed advantage here but we’ll find out for sure on Friday night when both teams play their first ‘real’ game of the season.

There are still quite a few tickets available to attend Louisville vs. Syracuse.

The UofL vs. Syracuse game is an “ORANGE OUT” as all SU fans are encouraged to wear Orange.  Cardinal fans should likely wear white to stand out, but if nothing else steer clear of any lighter shades of red to boldly differentiate from the home team’s color wheel.

It is also “Medical Appreciation” night in the Carrier Dome, so make sure you high-five all your docs, nurses & emergency responders and let them feel the love.

The game is played in a dome so weather is a non-factor, but it does look like it will be a beautiful day outside the dome 81/62, partly sunny.

The Cards vs. Orange is available on ESPN2 at 8:00.  Adam Amin will provide the play-by-play action with former Texas coach Mack Brown adding color and Molly McGrath on the sideline.