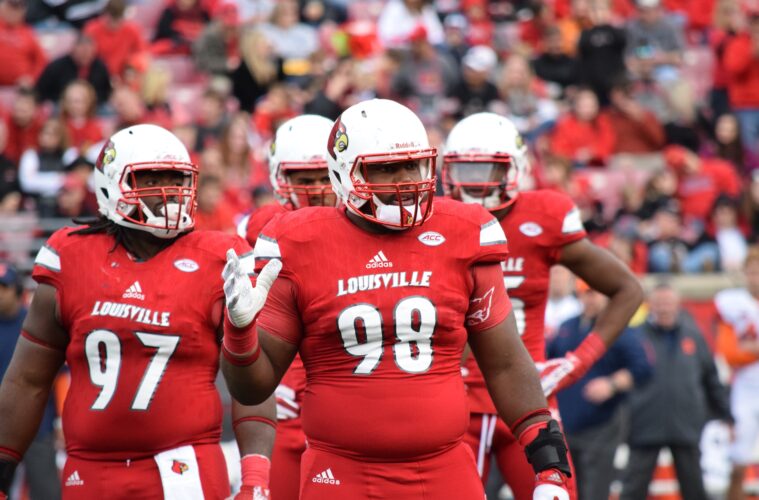 Before the Release of the Depth Charts

This we know. Louisville and Auburn will each put 11 players on the field when they kickoff the season in the Chick-Fil-A Classic, Saturday in the Georgia Dome (3:30 p.m. CBS). Which 11 starts and which 11 finishes is guess.
Coach Bobby Petrino has always held things in check. Starting roster two deep. Injuries, discipline, player dismissals. Nothing new to the fans and media.

As one former player told me. “He just doesn’t like sharing our business with anyone.”

I don’t think anyone can fault him for holding back until Auburn releases their two deep roster, Tuesday . Petrino said he will do the same. He also said there might be a line that says Smith at Quarterback or Jones. This too is nothing new. A lot of teams do it.

They want to keep the best mix of players in against the opponent. The situation, down, where on the field. The
Petrnio did say he has mixed and matched 11 different offensive lineman between guard and tackle. This is good and bad. The good is the Cards have depth. The bad none are good enough to lock down their respective positions.

“We’ve been rotating a bunch of guys in there,” said Petrino who admitted “smiling because it’s game week. Rocco (Gasparro , Football media contact) said we’re going to talk all summer.” He’s done that.

Coaches don’t like tip their hand. They want to squeeze every ounce of advantage they can.

The burning question everybody wants to know, who starts at quarterback. Petrino has four to choose from. The two most talked about names are sophomore Reggie Bonnafon, a Trinity product who started five games a year ago. The other is Will Gardner who started the season, was injured, came back and his season ended  against Boston College with another knee injury.

He also has Kyle Bolin, the Lexington, Ky., native who kept throwing the ball to DeVante Parker, and the Cards kept scoring enough to beat rival Kentucky last season. Freshman Lamar Jackson from Boynton Beach, Florida, a four star recruit, could be in the mix if ready.

Petrino hinted that he knows who the starter will be but left the possibility that two QB’s will see action. Who that might be is a guess.

In 2005 Stefon LeFors started and freshman Brian Brohm would play at least a series in the second quarter. Michael Bush even had a quarterback package early in his career but did most of his work as a running back.

“Quarterback has been very competitive,” said Petrino. “You want someone who is reliable, not unpredictable……do what your coached to do. You want to be accurate. Put it (pass) on the left earlob or over the right shoulder. All did a nice job.”
Petrino says he knows who the starter will be, or at least a good idea. He said. The team already knows through the competition during the preseason workouts. But has not told them.

A strength could be receiver. Junior James Quick has the most experience with sophomore JaQuay Savage, Alphonso Carter (injured status uncertain), Jamari Staples and Pat Thomas. Freshman Traveon Samuel Is supposed to have blazing speed.
Petrino says he has a lot more to work with offensively compared to returning last year.

“Lot of  newness. It’s almost like starting over. Offensively, I really like out talent. We expect them to execute,” said Petrino.
With such an inexperienced offense there will probably be growing pains. A year ago a new system and with injuries the offense struggled. But it shouldn’t struggle as poorly as a year ago.

“I really think I have an understanding offensively of where we are,” said Petrino.

Defensively the Cards should be fine even with an all new secondary. Petrino has said you can’t replace Gerod Holliman, an All-American, with one player. Georgia transfer Josh Harvey-Clemons at safety is mentioned as a leader at safety.

In the middle is the heart up front the defense has veterans Keith Kelsey, Pio Vantuvei, Sheldon Rankins, Keith Brown and DeAngelo Brown. Devonte Fields, the Big 12 defensive freshman of the year transfered from Texas Christian. He will see more playing time as he gets into shape.

“The defense needs to play fast and physical…..we have a lot of speed. We need to play with emotion. Keep Auburn (offense) off the field,” said Petrino.

Petrino said he had his second dress rehearsal Sunday night under the lights to get the players accustomed to what they should do in pregame. “The young players learned how they should go about their business.”

Auburn (8-5, 4-4) last season is picked to win the Southeasten Conference even though they have a first year quarterback in Jeremy Johnson. In seven games last season he complete 28 of 37 passes and three touchdowns. He replaces Nick Marshall who started all 13 games accounting for 3,329 yards including 798 rushing.

The Tigers will spread the field run the ball and throw deep, trying to get mismatches. Auburn coach Gus Malzahn and Petrino are mentioned as offensive geniuses. Petrino says he sees some of the same tendencies offensively the Cardinals employ.
“We have to stop the run, the deep ball on first down. Get off the field on third down,” said Petrino. “We have to put them behind the sticks. We need three and outs. It makes it harder for a team to play up tempo,” said Petrino.

Sophomore L.J. Scott who rushed for 201 yards and two touchdowns a year ago likes playing an SEC heavyweight, ranked sixth in the AP preseason poll.

“It’s true of any athlete. You only measure yourself about who you play. To be the best you’ve got to play the best,” said Scott