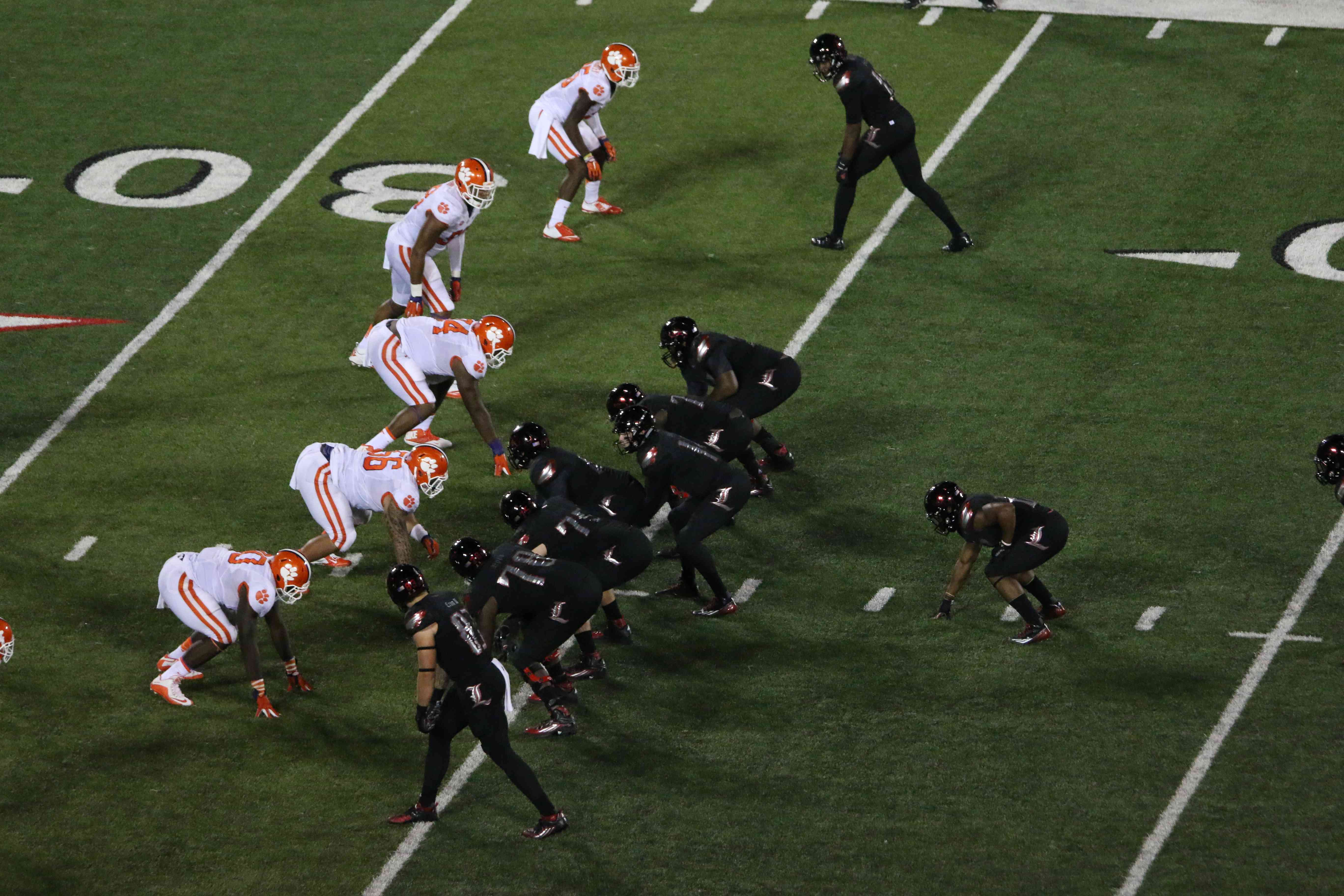 Louisville has been ON FIRE in its first 4 games of the season.  Coming off its win over Florida State the Cards looked like they had to shake off some rust in the 1st quarter vs. Marshall but got things clicking enough to put up incredible yardage and point totals. Defensively the Cards’ 1st unit has increasingly been dominant.  Clemson’s defense has also been superb, but it’s offense under heralded Deshaun Watson has yet to fire in a serious game as the offensive line continues to shuffle.

UofL has been prone to the big mistake, but it hasn’t yet mattered.  Clemson has cleaned up its turnover problem from a year ago and if the Cards give up the easy fumble, the easy INT or the special teams disaster (like in 2014) then Clemson can get a leg up over the Cards.  The key thing Saturday night is, play your game, play smart, don’t force anything and play behind your defense.  Lamar Jackson is talented enough to make plays and the Cardinal defense is sound enough to maintain the Clemson attack.

The Louisville Offense has not fared well against the Clemson Tigers over the past 2 meetings. In 2014 & 2015 the Cards scored 17 points in each contest and gained just 264 yards in Death Valley and 272 yards last year. The Cardinal offense in those games is 3 of 31 on 3rd down during both games……… THREE OF THIRTY-ONE! If the Cards don’t do a better job on 3rd down offensively on Saturday then forget more yards & points or beating Clemson.  The Tigers’ Brent Venables has done a great job scheming against the Louisville Offense in the two meetings between the schools and both games came down to the wire (3 & 6 point games).

But Lamar Jackson could change things.  Last year when Louisville inserted Jackson into the lineup for a specialty package with Reggie Bonnafon in the backfield the Cards moved the football.  It can be argued that UofL should have stayed with that package and plan more often last Fall against the Tigers.

Clemson will be the best Defense the Cards have played in 2016 BY FAR.  Last year the Tigers contained everything that Louisville did…. Clemson was just faster and more experienced.  Louisville couldn’t get the edge at all and when the Cards did find room in the passing game they failed to connect on a few bombs.

The Tigers are fast & physical again and they are stout against the run and possess one of the best pass defenses in football.  Lamar Jackson’s versatility is a huge value against Clemson’s defense as they will need to account for his full complement of abilities.  Clemson is most likely going to make Lamar beat them with his arm as they can’t afford to let Jackson run in the open field. Clemson also has a FANTASTIC pass rush, as per tradition for the Tigers.

Louisville’s best bet is actually to establish a ground game.  It won’t be easy…..NOTHING will be easy against the Clemson Defense. But practicing patience and understanding that it’s OK to punt is going to be a big deal for the Cards.

One thing that can’t happen is Louisville forcing the ball or giving up the ball.  There isn’t going to be a lot of room for the Cards on Saturday and Lamar Jackson can’t get frustrated and try to squeeze in passes & the Cards once again are one of the most fumble prone teams in college football (119th).

Ultimately Louisville is going to be facing its biggest test of the year on Saturday night and if the Cards are going to prevail they will have to be precise and patient.

Let’s take a look at the ranges of productivity that we might expect in Death Valley.

Based on the chart above the Cards will score another WIDE range between 29.27- 47.74 points.

Based on the chart above the Cards will gain between 151-199 yards per game.

Louisville’s Defense has held the Clemson offense mostly in check over the past two seasons……but the Tigers were able to put up enough points to win the game.  A punt return for a TD allowed Clemson to win the 2014 match-up despite CU gaining just 229 yards.  In 2015 at Papa John’s a youthful Tiger Offensive Line was able to get necessary yards late in the game with Wayne Gallman.  Still Louisville held Clemson to 23 points in 2014 & 20 points in 2015……and lost.

Todd Grantham’s defense has done a nice job against Clemson, but it hasn’t been good enough to win.  In 2014 it was a late drive where the Tigers worked the flats and forced the Cardinal secondary to tackle in space.  In 2015 Louisville just wasn’t physical enough in the 4th quarter.

This year Clemson’s offensive line has had its struggles.  There has been a lot of mixing and matching along the Tiger offensive front and Clemson has given up some uncharacteristic pressure.  Additionally the Tigers just haven’t been as explosive as they have been in year’s past, but Clemson started slow a year ago, got rolling in October and played in the National Championship game.  Maybe they are following the same formula?  The Tigers have plenty of talent and the Louisville Defense might be the biggest test for Clemson in the 2016 regular season.

Let’s take a look at a few charts to find some predictive ranges.

Using the 3 games above and with what Louisville allows Clemson should score 29.46-31.92 points according to this chart.

Using the 3 games above and with what Louisville allows Clemson should score 21.325-22.45 points according to this chart.

Using the 3 games above with and with what Louisville allows Clemson should gain 311.28-319.43 yards according to this chart.

Using the 3 games above with and with what Louisville allows Clemson should gain 277.20-283.025 yards according to this chart.

Using the 3 games above with and with what Louisville allows Clemson should gain 184.15-195.33 yards according to this chart.

Using the 3 games above with and with what Louisville allows Clemson should gain 164.11-175.55 yards according to this chart.

Using the 3 games above with and with what Louisville allows Clemson should gain 124.08-125.65 yards  according to this chart.

Using the 3 games above with and with what Louisville allows Clemson should gain 107.46-114.95 yards according to this chart.

The Game is SOLD OUT.  There are tickets available in the secondary market.  Good luck finding any with 0000s tacked on.

The weather looks like it will be a beautiful day turning into a perfect night with a kick off temperature of 73 degrees with Clear Skies.

With the number of fans anticipated to make the trip to Memorial Stadium in Clemson, S.C., Louisville and Clemson officials are reminding fans about the Clear Bag Policy in effect at the venue. While fans are encouraged to leave bags outside the stadium, permissible items to carry into the stadium are outlined below:

·        Bags that are clear plastic, vinyl or PVC and do not exceed 12” x 6” x 12.” (Official Louisville/Clemson logo clear plastic tote bags are available at local retail stores), or

·        An exception will be made for medically necessary items after proper inspection.

·        All season ticket holders will receive one approved clear plastic tote per account.

·        Fans will still be able to continue their normal tailgating activity on campus.

·        Patrons will still be able to carry other items into the stadium such as binoculars, cameras, and smart phones, but their carrying cases will NOT be allowed.

·        Stadium cushions and seatbacks are still permitted. Seatbacks and cushions with arms or any pockets will not be permitted.

·        Working media will continue to enter the stadium thought Gate 16 where they will be subject to screening and bag inspections in the same manner as past seasons.

Prohibited items include, but are not limited to artificial noisemakers, backpacks, non-clear bags or purses, banners/flags/flag poles, coolers, outside food or beverage, umbrellas, weapons of any kind, or any bag larger than the permissible size.

The broadcast will be available on Louisville Sports Properties and the Tune In Mobile App.  The legendary voice of the Cards Paul Rogers will provide play-by-play with Alex Kupper providing color and Jody Demling from the sideline.  Additionally the Cards’ call will be broadcast on Sirius Channel 81 & 84.

The Cards vs. Tigers will be broadcast on ABC at 8:00.  ESPN’s College Game Day will begin at 9:00 a.m. Chris Fowler will provide the play-by-play action with Kirk Herbstreit adding color and Sam Ponder & Tom Rinaldi on the sideline.