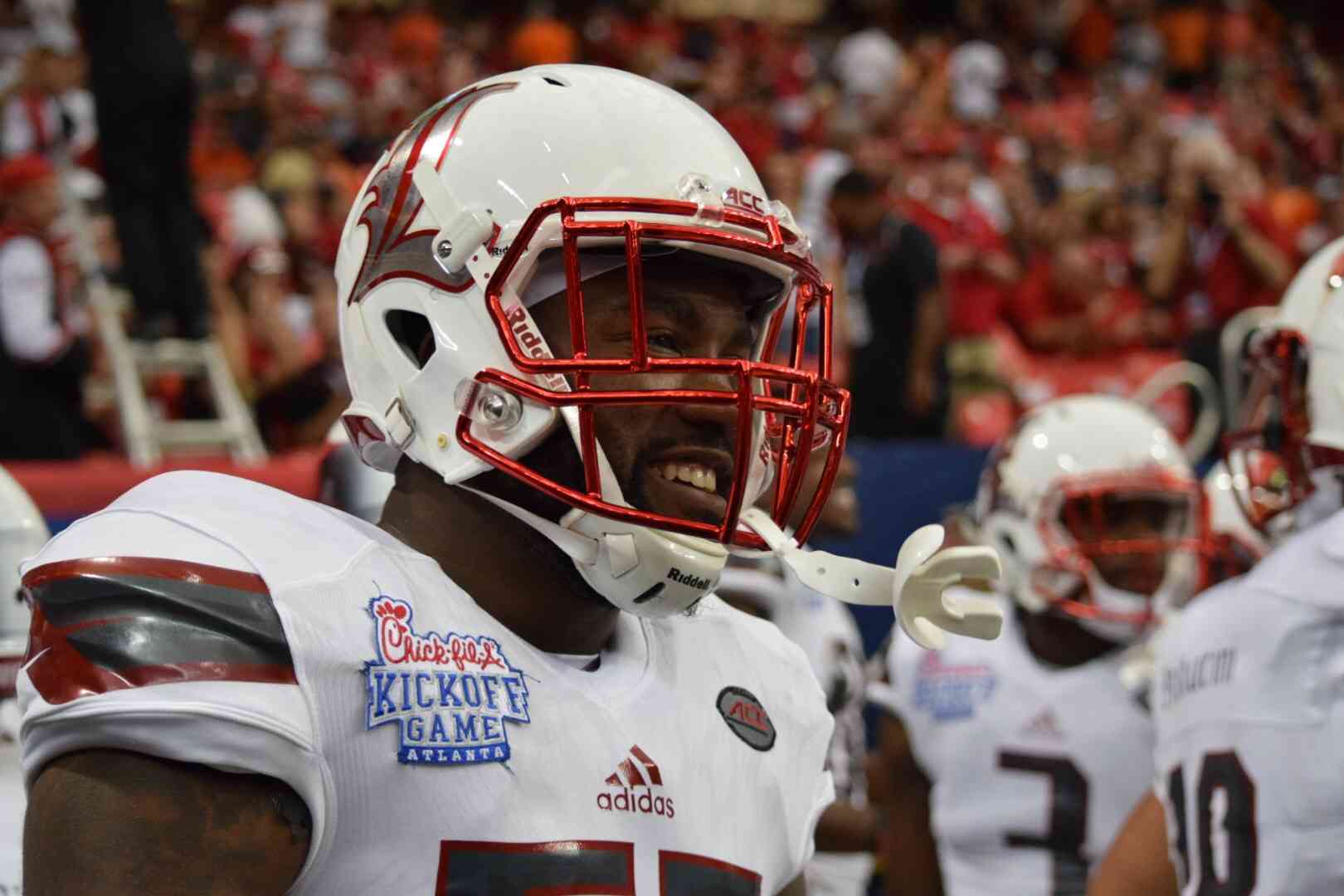 Several outlets have named Louisville’s Linebackers among the best in the nation this pre-season.  Much of those accolades have come largely due to returning seniors Keith Kelsey & Devonte Fields.  Kelsey & Fields BOTH were named to the Pre-Season All-ACC 1st Team Defense last week at the ACC Kickoff.

Keith Kelsey had 107 tackles last season and appears slightly bigger than he was a year ago heading into Fall Camp.  Keith is a leader of the defense and was named a captain for the 2016 season this week by his teammates.  Perhaps the only thing that Kelsey needs to do more of to round out his game is get more of the intangible stats, Forced Fumbles, Interceptions, Pass Break-Ups, Sacks.  12 Tackles for Loss last year was a very good total for an Inside Linebacker, but the thing that makes Keith so effective is his reliability.  Kelsey’s coaches & teammates really trust him to make the play and do his job and he rarely misses an assignment.  The Cards will be just fine if Keith has a repeat performance of 2015……but for him to move up the draft boards it’s the small details in the game that can make a difference between a few rounds in the NFL Draft. Very similar to what Preston Brown needed to improve on his Senior season.

Louisville did get a bit of ‘expected’ bad news Trevon Young is going to redshirt the 2016 season. After his separated and broken hip in the Music City Bowl vs. Texas A&M there was some thought that Trevon might be able to return for this season, but a setback shelved that idea and Young for the year.

Stacy Thomas will come into a starting role after the departure of Inside Linebacker and Bash Brother James Burgess.  Unfortunately Stacy was pressed into early action vs. Texas A&M after Burgess was ejected for targeting, but Thomas shined with 11 tackles against the Aggies.  Stacy has been a special teams standout for UofL the last two seasons and it was always clear that he would do well once given the opportunity to start……..now he has the opportunity.

At the other linebacker spot opposite of Devonte Fields is likely going to be James Hearns. But Hearns is going to have to stay on top of his game in order to remain there.  He’ll be pressed by redshirt Jonathan Greenard & sophomore Henry Famurewa.  Greenard has that ‘look’ about him and when we watch him we feel that we are watching the beginnings of a really special football player.  Hearns seems to be finally fully focused and is playing outstanding football off the edge, particularly in pass rush.  James also moves up and puts his hand down on the defensive line at times in practice.  Greenard & Hearns together can be a menacing pair.  Famurewa is coming off a torn labrum suffered last Fall.  Henry looked like someone who was going to factor into the rotation last year prior to his injury but did participate in Spring drills and should be back to full speed for the start of Fall Camp.  Louisville REALLY needs all 3 players (Famurewa, Greenard, and Hearns) to provide valuable snaps during the season. It will also be interesting to see how Gary McCrae fits in to the outside linebacker rotation and what his readniness level is.  McCrae originally signed with Georgia in the 2015 class but instead went the Junior College route.

Behind Stacy Thomas is redshirt freshman Amonte Caban a former 4-star recruit out of Alabama and chose the Cards over offers from Clemson, South Carolina, Mississippi State, and Tennessee.  Amonte has SIZE and certainly looks the part after gaining 22 pounds since arriving as a freshman a year ago. Issac Stewart will back up Keith Kelsey also inside.  Stewart appeared in 9 games and registered 7 tackles including the Florida State game when Kelsey left the game with an injury.  At some point one or both of these guys may be pressed into action and how they perform will be a big deal for the Louisville Defense.  They need to be ready.

We already mentioned Gary McCrae at Outside Linebacker and the main thing for Louisville’s defense in 2016 is that it’s going to be very difficult for newcomers, particularly freshman to come in this summer and immediately crack the two-deep.  We think a lot of the other 3 incoming signees Tobias Little, Tabarious Peterson and/or Malik Staples and we’ll get a real sense of their readiness during Fall Camp. But realistically this Louisville Defense is STACKED with experience so if any one of these guys gets major snaps in 2016 they are going to have to be more than special…..they’re going to have to be extraordinary.