The AP Poll was released Sunday afternoon and every year I hear: “Team X is over-rated every year” or “Team Y never gets any respect in the polls”.  So we wanted to set out and find out: WHO IS THE MOST OVER-RATED IN THE PRE-SEASON OVER THE PAST DECADE?  THE MOST UNDERRATED?

Prior to aggregating data we wanted to examine our own bias towards schools or conferences and felt that programs like Notre Dame, Michigan, USC, and Texas would likely be OVER-RATED and programs from non-Power leagues that have performed well over the past decade would be near the top of the UNDER-RATED group; schools like Boise, Cincinnati, and Louisville (who is now a part of the ACC).  Also, we took note of the alleged “West Coast Bias” that is discussed each season that takes place with voters and schools from the Mountain & Pacific Time Zones.

How The Findings Were Calculated

Most Pre-Season Over-Rated Since 2005

Oklahoma in the past decade is the MOST OVER-RATED program in the Pre-Season and actually by a WIDE margin, expanding on the Sooners lead from a year ago.  Oklahoma’s -77 represents a 7.7 spot over-ranking per season over the past 10 seasons.  Oklahoma met expectations in 2007 starting & finishing 8th and actually exceeded expectations in 2010 & 2013 finishing HIGHER than the Sooners began in the pre-season.  The other 7 seasons however, fall way short with the biggest disappointments coming last year when OU began #4 and finished outside of the Top 25 and in 2009 when Boomer Sooner started pre-season #3 and again finished outside the final poll.

Prior to 2013 Florida State held this honor, but as the Noles move further away from the end of the Bobby Bowden era FSU’s share has diminished for another year with Nebraska taking on the mantle as #2.  Still Florida State has finished below of where they started in 7 of the past 10 seasons.

It is interesting to note that no school from the Group of 5 (non-power conferences) made the Over-Rated group.

Most Pre-Season Under-Rated Since 2005

TCU made a HUGE jump from a year ago to take over the #1 Most-Under Rated College Football program thanks largely to its +23 effort last year coming from pre-season Unranked in the AP Poll to finishing as the #3 team in the nation.  We all know that the Horned Frogs were left out of the College Football Playoff, but perhaps this bit of information helps future committee members consider TCU more strongly moving forward.

Readers are likely not surprised to see Missouri, Cincinnati, and Boise State in this group as they routinely seem to outperform pre-season expectations.  But Oregon & Alabama ARE surprises.

The Most Accurately Pre-Season Ranked Programs Since 2005

Note if you done see your program listed in the over/under/or accurately ranked categories it is because they have not been in the Pre-Season or Final Top 25 Poll Since dating back to 2000 (ahem, Kentucky).  Negative outputs here list programs that are teetering towards being over-rated and positive outputs represent teams that are flirting with under-rated status.  We made the cut-off for “accurate” rankings to be within an average of 1.5 spots within the past decade.

Not surprised about Oklahoma especially considering a year ago the Sooners were the most Over-Rated in our findings and OU once again started out in the Top 5 and finished outside the final poll.  TCU being a former (non-Power) school also is no surprise as the most Under-Rated program.  The Horned Frogs (and Louisville) will continue to have to work to break out of the subconsciously (or not) biased minds of the AP voters over the next several years.

This is designed to be a long-time review for bias of Football Writers.  Our data goes back to 2000 and maybe one day we’ll take it back even further.  But it is interesting that the leader in the OVER-RATED and UNDER-RATED categories are both head coaches that have been at their programs for quite some time in Bob Stoops and Gary Patterson as coaching changes can certainly impact the findings.  Perhaps we’ve found some real bias within these two programs?

If you want the spreadsheet that I used to calculate this I will gladly send it over (request via Twitter @UofLSheriff50).  It is too large to insert into a post, but I’ll give you an idea of what it would look like if I did insert it (unreadable).  Clicking the image makes it larger, but still unreadable. 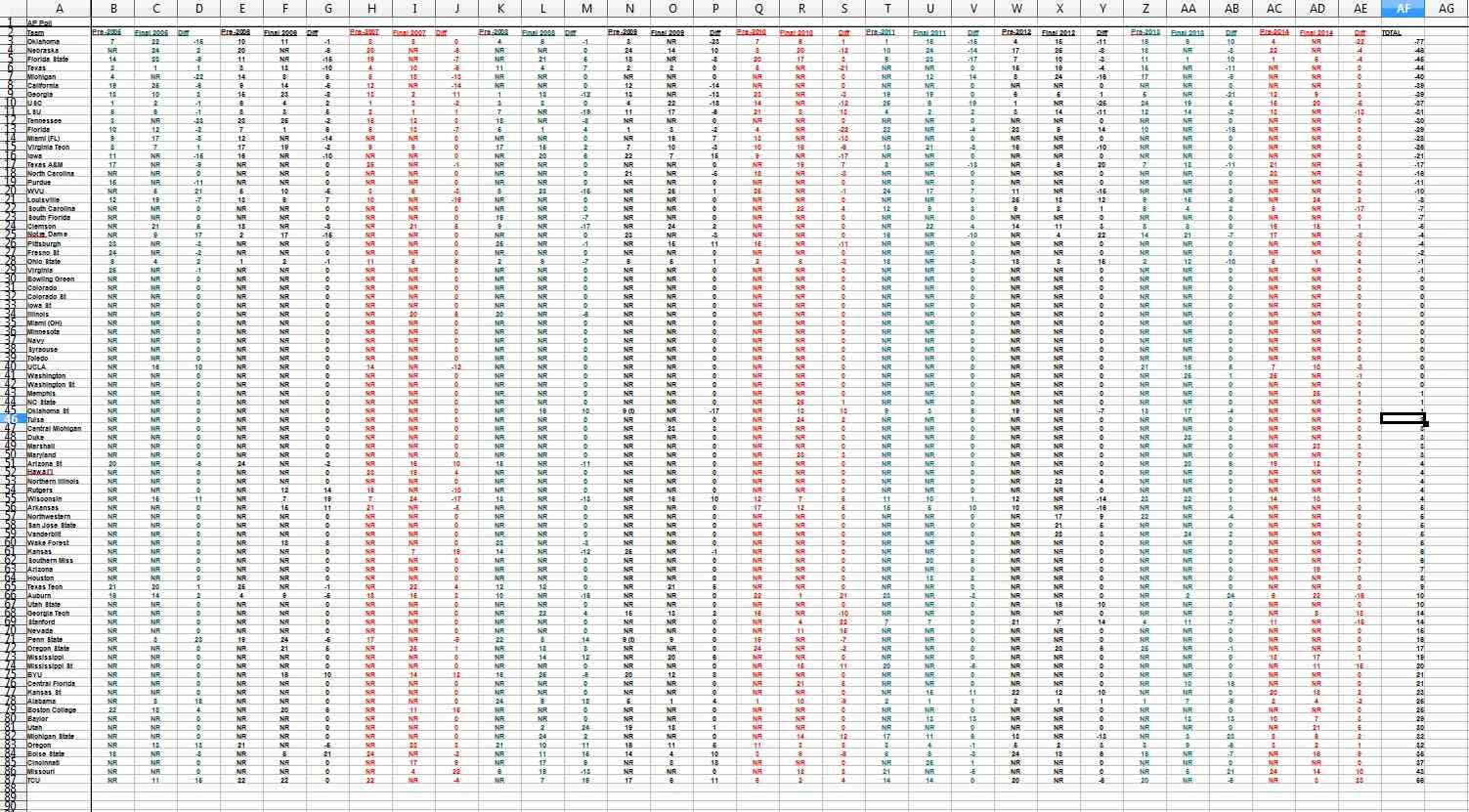