The AP Poll was released Sunday afternoon and by now College Football and the contenders for the 1st ever College Football Playoff have been discussed ad nauseam.  It’s time to get to some of the actual action.  We are 10 days from the start of the College Football Season when Texas A&M and South Carolina kick it off it Williams-Brice Stadium.

One of the conversations that happened a year ago was a Kentucky fan claiming that Clemson “is always over-rated in the pre-season.”

That claim got me thinking…….in the last 10 years what programs have under OR over-performed pre-season expectations as it relates to the Pre-Season & Final AP Poll.

What I Thought I Would Find

I wanted to set my expectations prior to aggregating data so that I could evaluate any bias that I personally held against schools OR conferences.   I believed that programs like Ohio State, Notre Dame, Michigan, and USC would likely be towards the top of the OVER-RATED crowd and programs from non-Power leagues that have performed well over the past decade would be near the top of the UNDER-RATED group; like Boise, Cincinnati, and Louisville.    I also took note to evaluate the alleged “West Coast Bias” that is discussed each season as the claim from out west is that voters tend to overlook teams in the Mountain & Pacific Time Zones.

Most Pre-Season Over-Rated Since 2004

Oklahoma in the past decade is the most OVER-Rated program in the Pre-Season closely followed by Florida State.  Oklahoma’s -56 represents a 5.6 spot over-ranking over the past 10 seasons.

It is curious that Florida State (the defending national champion) is listed 2nd.  But they aren’t listed here because of what the Seminoles did LAST YEAR, rather the Noles are listed here because of the 2004, 2005, 2006, 2007, 2009, and 2011 seasons.  In fact, Florida State only finished ahead of their pre-season ranking in 3 of the past 10 AP Polls.

Most Pre-Season Under-Rated Since 2004

Utah & Auburn are tied for the Most Under-Rated program in the AP Pre-Season Poll the last decade followed closely by Boise State.  The Utes and Tigers +41 represents a 4.1 spot under-ranking each year for the past decade.  Utah made tremendous progress in 2008 when the Utes began unranked and finished #2 in the Final AP Poll.  Similarly for Auburn in 2013 when the Tigers started the season unranked and finished #2 in the final poll.

Schools like Boise State +40, Cincinnati +37, and TCU +33 have more steady data, but a big surprise on the list was Alabama +27.  The Crimson Tide make the list as a result of the 2005 (vacated) season (NR to #8),  the 2008 season (#24 to #6).  Since the 2008 season however, there hasn’t been much room for Alabama to build on their under-rated status as the Tide have been ranked towards the top of the Top 25 and haven’t given many positions back over the past decade.

The Most Accurately Ranked Programs Since 2004

Note if you don’t see your program listed in the over/under/or accurately ranked categories it is because they have not been in the Pre-Season or Final Top 25 Poll Since dating back to 2000 (ahem, Kentucky).  Negative outputs here list programs that are teetering towards being over-rated and positive outputs represent teams that are flirting with under-rated status.  I made the cut-off for “accurate” rankings to be within an average of 1.5 spots within the past decade.

My Thoughts After Findings

I knew coming in to this exercise that Florida State had some lean years prior to the transition of Bobby Bowden to Jimbo Fisher and did not meet expectations.  So FSU being in the over-rated category despite being national champions in 2013-14 was not a surprise.  This is, after all, a long-time review for bias of Football Writers……not football programs.  So the opinion of those that vote in the AP Poll is really what we are trying to prove here.

Oklahoma and Georgia are interesting at the top of the over-rated group because Bob Stoops and Mark Richt have been at the helm during this time with no change anticipated and both coaches in their mid-50s.

The Under-Rated Category did take me by surprise in that 4 SEC programs (in addition to 4 SEC teams in the Over-Rated Category) made the group.  I expected the Boise, Utah, Cincinnati, and TCU crowd here.  And Stanford really has made outstanding strides since the 2010 season.

If you want the spreadsheet that I used to calculate this I will gladly send it over (request via Twitter @UofLSheriff50).  It is too large to insert into a post, but I’ll give you an idea of what it would look like if I did insert it (unreadable).  Clicking the image makes it larger, but still unreadable. 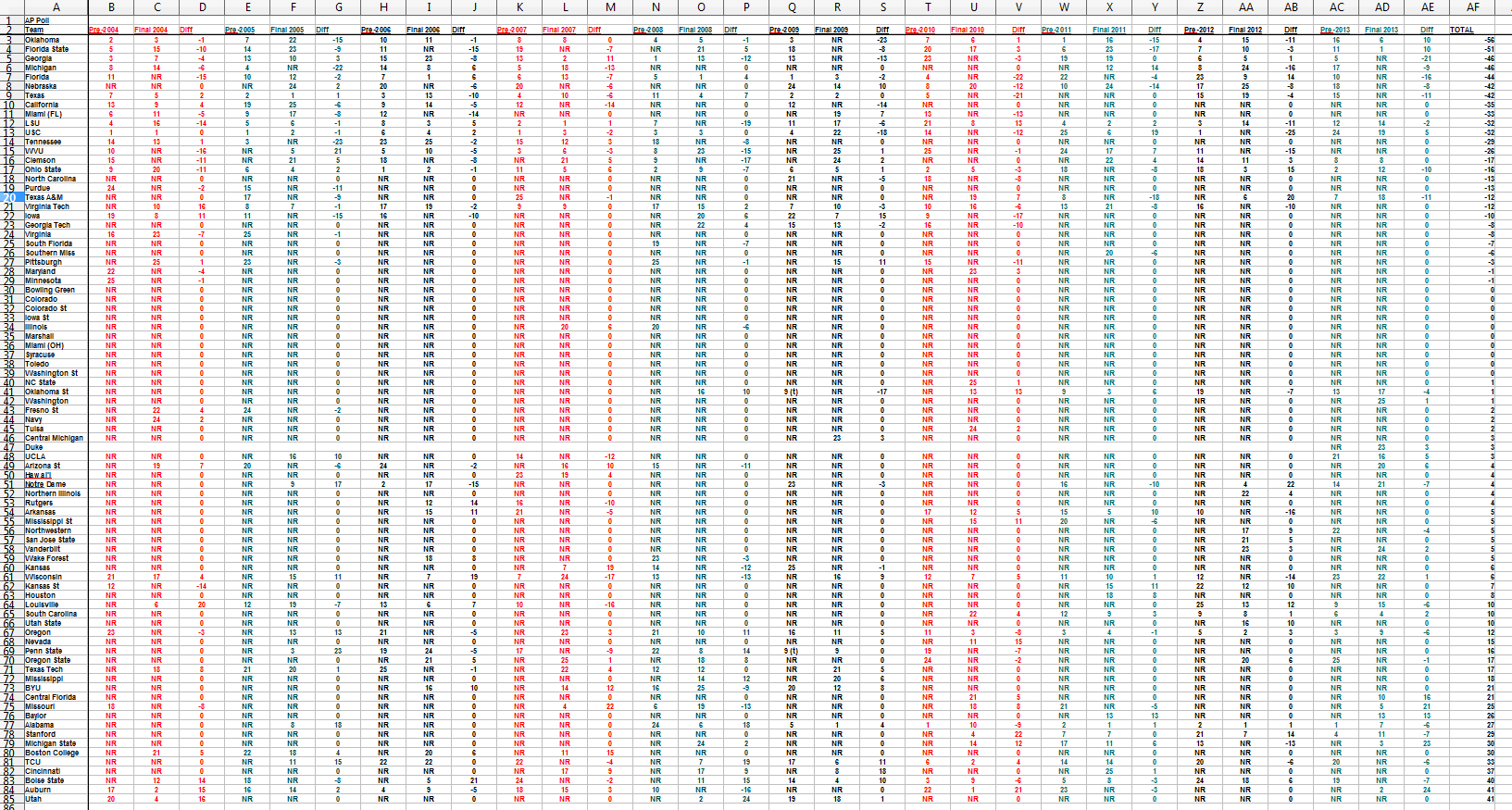