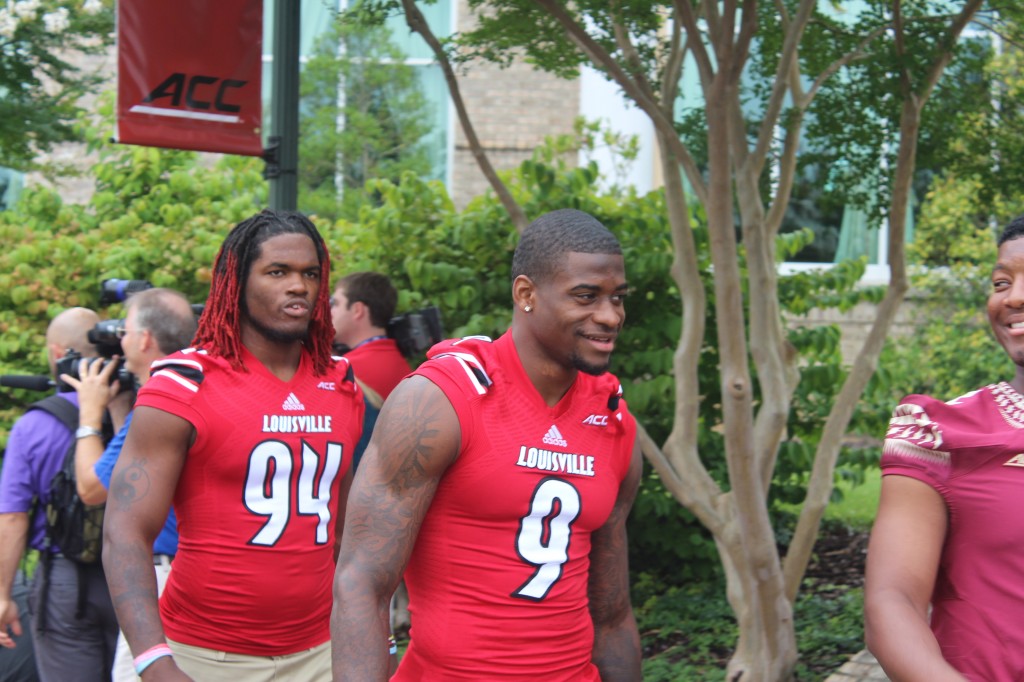 It is often said that a Coach reflects its players. A defensive minded coach will instill a defensive focused team – likewise an offensive coach would do the same. A confident coach directly effects his players as well, in that generally they adopt a ‘I don’t think you can stop us’ attitude.

That appears to be what has happened to the Louisville Football Team under Bobby Petrino, at least that’s what was reflected in Lorenzo Mauldin and Devante Parker – the two players brought to ACC Media Day.

Bobby Petrino didn’t shy away from talking about Championships, even with it being the first Cardinals experience in the ACC.

“We expect to compete for Championships,” The Head Coach noted. “That’s what we want to get done.”

“Our expectations are going to be high. I’ve always believed that you set expectations high. We have a group of young men that we’re coaching that have been playing for a number of years that know how to prepare, that have played in big games, and know how to win”

Now those statements may seem small. I mean, ‘Breaking: A Head Coach thinks his team can win a Championship’. That isn’t much of a shocker. But it meant something when you compare it to the prior regime of Charlie Strong. A Head Coach who would quickly and often side step conversations about Championships with typical coach-speak.

Clearly this attitude has rubbed off on the players. Devante Parker didn’t say much at ACC Media days – he never does – but what he did say opened my eyes.

“The last staff liked to put their foot on the breaks. These guys like to score. That’s what we’re looking forward to,” He explained.

In a later interview with the ACC Digital Network, Lorenzo Mauldin, was caught expressing his confidence in the offense when asked about Devante Parker.

“He’s gonna catch a lot of balls, I know that,” he explained with a laughter.

This shouldn’t really be a shock to anyone that Louisville Football would be feeling this way. Their coach has proven that if he’ll make even average quarterbacks look great. He made former Louisville QB Hunter Cantwell look like an NFL QB. He led Western Kentucky QB Brandon Doughty to a win over Kentucky and a bowl season. He also often spoke boldly about the Hilltoppers team while there. Now he has, Will Gardner, a quarterback with more skill set than both of those.  Why shouldn’t his players feel confident in his abilities?

The two days the Cardinals spent in North Carolina where supposed to serve as the official: ‘They’re really in the ACC moment’. For me, it was the first official, ‘Bobby Petrino is really back at Louisville moment’. It wasn’t always what the Louisville players said, sometimes more how they conducted themselves. With a quiet confidence and no apprehension about the move to the ACC, it was more like: ‘we’re here, let’s do this.’