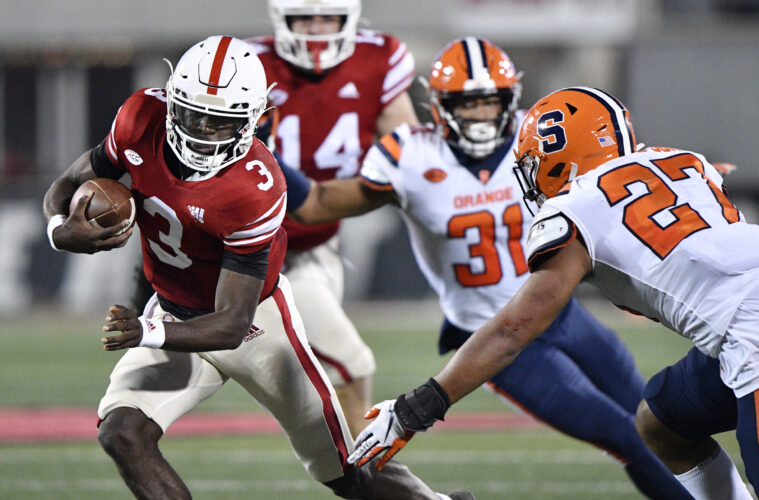 Louisville took the field on Friday night vs. the Syracuse Orange and dominated the game defeating SU 30-0. The game did not begin cleanly as the Cards’ offense stalled against the worst defense in the ACC and settled for a FG, but the defense did its job early and throughout the game. It was the 2nd shutout of the Scott Satterfield era (EKU 2019) and the first shutout of an FBS team since 2013 (FIU), and the 1st shutout of a P5 team since 2004 (UNC).

Louisville did have 3 turnovers on the game, 2 INTs and 1 fumble from Malik Cunningham. The 1st INT was over his receiver Tutu Atwell and the 2nd INT was an ill-advised force right before halftime in FG range.

Malik’s fumble was a hit from behind also in Syracuse territory. Scott Satterfield elected to remain with his signal caller and Louisville did go on to win the game.

As it sits Louisville still is -12 in turnover margin on the season despite getting 3 turnovers vs. Syracuse. The Cards left at least 9 points on the board tonight (if not more) and the turnovers have led to losses in games’ past. It didn’t tonight…. but it might versus Wake Forest & Boston College in the remaining games of 2020.

3 Touchdowns tonight on 413 yards. Louisville was in ‘drain the clock’ mode for much of the 4th quarter and 3 FGs. Cunningham did throw a perfect pass to Braden Smith that was dropped and he threw another perfect ball to Tutu Atwell for a TD.

Hooray for the Defense

Shutouts are difficult to do when a team plays as many players that saw the field tonight for the Cardinals. Even against a subpar team it can be difficult to keep bad teams from getting off the board.

Syracuse had 1 Third Down Conversion…. on the final play of the game. The Orange had 137 yards of offense tonight, they managed just 7 first downs. Syracuse had the ball for just 18 minutes and 14 seconds. Syracuse only ran 7 plays on Louisville’s end of the field.

Louisville’s defense tee’d off on Syracuse like it was Top Golf. SU QB Jacobian Morgan actually had to go to the hospital to get checked out (let’s hope he is OK).

It Wasn’t Perfect, But The Program Needed It

This wasn’t a perfect performance (well maybe defensively it was), but the program needed a win like this. It felt like Louisville had turned the corner against Florida State and then hours prior to the game the COVID-outs were announced to the world and Louisville lost a pair very winnable games against Virginia Tech and Virginia. The defensive line was thin, then players were injured, a game was delayed, Javian Hawkins opted out other players announced transfer.

This season hasn’t been easy for anyone, but it’s even more difficult for a football team during a pandemic to lose as many games as Louisville has in 2020. Don’t forget the disappointment from expectations at the start of the season, Louisville hosted College GameDay in Week 2 vs. Miami.

But the Cards haven’t been BLOWN OUT and have contended in each of its losses in 2020. They outgained the Hurricanes, they were a catch away from the W against Pitt, they fumbled away a 1-point lead against Georgia Tech in the 4th quarter, an offensive play (or defensive) away from Notre Dame, a defensive line away from Virginia Tech and too many turnovers vs. Virginia.

Louisville’s been close and it’s nice to see the Cards come out and get a win. It wasn’t perfect. There were still penalties and turnovers and some drops…. but those mistakes didn’t lead to a loss.

One huge benefit to winning by 30 is a lot of players get to play. But Louisville actually started from the beginning playing lots of bodies. Duane Martin played an expanded role with Marshon Ford being out of the lineup (he was on the sideline), KJ Cloyd, Jordan Watkins, Josh Johnson, Marvin Dallas, the return of Hassan Hall, Jawon Pass, Evan Conley and a host of other players that have played more than usual.

This type of game is great for player development, keeping mileage off the starters and more than anything MORALE.