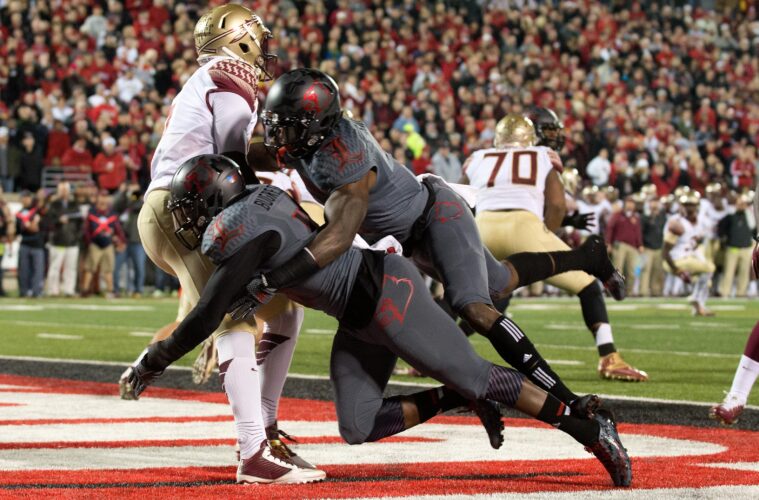 Notre Dame’s Offense regularly outperforms its opponents’ average yardage allowed.  The Irish gain 81 yards more per game than its opponents have typically allowed on the season or 122%.  Just 2 teams, early in the season, held Notre Dame below its team average allowed by a small margin.

Louisville allows 285.7 yards per game, just behind Stanford (277.7) who Notre Dame was able to exceed by 92 yards.  Louisville will be the 2nd best defense the Irish has faced in 2014, and based on this data we should expect Notre Dame to gain 348-367

The Cards have the #5 Total Defense in the nation and are 9 for 9 in holding opponents below their average yards gained on offense.  Louisville holds teams to 85 yards fewer than average or just 75%.

Notre Dame averages 465.1 yards and is 28th in the nation in Total Offense.  The Irish will be the best offensive team that Louisville will play in 2014 and it will be interesting to see if Louisville’s 1st half against Florida State is the truth……or if it is the 2nd half.  We may get our answer on Saturday, but given this set of data we can expect that ND will gain 348-380.

Both sets of data suggest that Notre Dame will gain 348 yards on the low end, but surprisingly it’s Louisville’s Defense set of data suggests that the Irish could reach 380 yards.  None of this takes into account turnovers, something Louisville is one of the best in the country at gaining & Notre Dame one of the most generous.  Also Everett Golson injured his AC joint in his shoulder which could cause ND to change some of its typical play-calling and perhaps even take some zip off of Golson’s passes……Everett has not missed time in practice however.

Everett Golson might get some grief for his turnovers, but his production through the air is undeniable. Golson gains 78 more yards or 135% of what opponents normally allow through the air.  ND has gained more than opponents allow in EVERY game in 2014.

Louisville allows an average of 198.3 yards per game through the air.  The Irish have played two teams better than the Cards in passing defense in 2014 (Michigan & Stanford) and given what we know here ND should be expected to gain 267-276 yards through the air on Saturday…….that is A LOT for what the Cards usually allow, but the Irish have done this all season.

Notre Dame averages 304.4 yards per game through the air and is the 2nd best (FSU) passing team the Cards will have faced thus far in 2014.  Given the data, the Irish should expect to gain 268-278 yards, virtually agreeing with the above set.

If Notre Dame can throw for 260-270+ yards this ballgame could be tilted in the Irish’s favor.  The trends say that ND will be able to be very effective through the air, but as someone who has watched the Cards all season and knowing the pass rush & secondary that Louisville has, I’d be surprised if the Irish actually do achieve this.  As always in these data-driven previews, players play and stats can sometimes tell the story.  In the end, I think Notre Dame throws for slightly less (around 225) but the data discovery is noted for reference later.  Also, Louisville’s run defense vs. ND’s rush defense (as we are about to discover) may force the Irish to be one-dimensional, forcing more attempts.

Notre Dame has been all over the place running the football in 2014.  The Irish have rushed for over 200 yards on four occasions in 2014, but have been held under 60 twice.  That’s unusual, but ND has gained more than opponents usually allow on the ground in 6 of 10 games thus far in 2014 and average a small increase of 3 yards more or 104% of their opponents rushing allowed average.

Louisville is the #2 Run Defense in the nation, allowing just 87.40 yards per game. Given what we know, Notre Dame will probably gain about 90 yards on the ground Saturday in Notre Dame Stadium.

Louisville’s Run Defense has been dominant.  The Cards almost halve opposing offense’s running game production on the year and in only one instance (FSU) have the Cards allowed more than averaged on the season.

Notre Dame’s Running Offense gains 160.70 yards per game and is the 4th best rushing team Louisville will have played thus far in 2014.  We shouldn’t expect that the Irish will have much more success on the ground than anyone else and the data suggests that ND will gain 84-101 yards against the Cards.

I don’t think Notre Dame will be able to run the ball very much against the Cards….and I also am not sure how much the Irish will try in an attempt to maximize downs.  The last 3 games UofL has allowed over 128 yards with NC State gaining a great deal in garbage time and Boston College being a primary running team.  Florida State is the real outlier as the Noles broke off big run after big run without Pio Vatuvei in the line-up for the Cards. Pio will return for UofL and if Notre Dame can gain healthy yardage on the ground against the Cards, game over. But I don’t expect it.

Notre Dame is a good offense, Louisville is a good defense.  This is a test of strength on strength on the football field.  The conditions should be about 40 degrees with a 50/50 shot at rain and about a 14 mph wind.  That is edging out of decent conditions for passing, but it is still acceptable.

The data presented seems to agree with seasonal trends on both sides of the ball (the first time all year that I’ve been doing this) so the question becomes, how healthy is Everett Golson’s shoulder?  If Golson can throw the ball and the conditions allow him to, we could have a game.  Also, what Louisville defense shows up?  The one from the 1st half against FSU or the 2nd half against the Noles?  These factors will determine how well Notre Dame can move the ball.

The addition of Lorenzo Mauldin, Pio Vatuvei, a week off for James Burgess, Deiontrez Mount, and Keith Kelsey (who all got repeatedly cut blocked against BC) is all HUGE.  Even Trumaine Washington is back in the mix at Corner.  Louisville finally got a true BYE week and now they will go against a very potent offense with a tendency to turn the ball over.  I like Louisville in this match-up, but I think Notre Dame will take their shots and have some success but I don’t think it will be consistent enough to turn this game into a shoot-out.