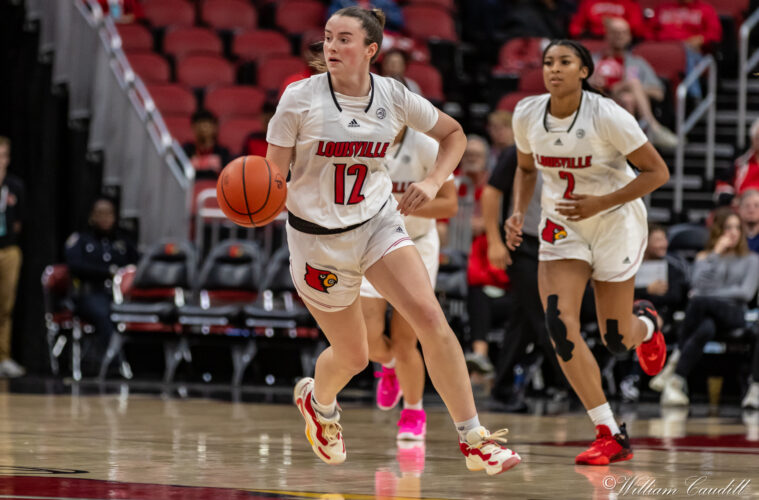 No. 7 Louisville Fights For A Win At Belmont

If you’re not paying attention and you see Belmont on a Louisville schedule you would probably assume it was a cupcake game. Well, you know what they say about assuming things. The Cards were on the road for this one and you saw a glimpse of what Jeff Walz was talking about when he said it would take a little while for this team to really gel and figure things out. Belmont is also a sleeper team. We only beat them by 14 last year and they weren’t missing their shots today.

Louisville went 14-37 in the first half and were outrebounded 18-15. While they were playing decent defense, they still looked like they were each trying to find their pace on offense. As a team they were able to force 5 Belmont turnovers in the first quarter and would end up scoring 10 points off 11 first half Belmont turnovers. Mykasa Robinson played one of the toughest halves we’ve seen from her so far this year and Olivia Cochran (Happy cake day, O!) tallied 6 first half rebounds. Hailey Van Lith and CC Carr were handling the ball well and getting points when we really needed them. In fact, if it weren’t for a three-pointer at the buzzer Louisville would have gone into the halftime break tied with the Bruins.

After the half it was a battle, and I was hoping the Cards would break away and find their groove. Although Louisville only led by two points at the end of the third quarter, they had Belmont on a 2:33 scoring drought toward the end of the third and forced 3 turnovers. At this point Hailey Van Lith had 16 points to lead the team, but Olivia Cochran was lighting up and heading for a double-double with 9 points and 9 rebounds. Going into the fourth quarter it was anyone’s ballgame. Belmont ended their scoring drought with a quick three-pointer from Sydni Harvey and took a one-point lead just 23 seconds into the quarter. It was back and forth from that point until the final buzzer. Louisville had a one-point lead with 7.6 seconds remaining and the ref called a moving screen. It was the right call, but it was a bold one. Blemont then sent Hailey Van Lith to the line with 6.4 seconds remaining and she went 2-2 to give her team a 73-70 lead. A Belmont timeout gave them the opportunity to set up a three-point play and send the game to overtime. The Louisville defense applied the right amount of pressure and Verhulst found the ball in her hands before being fouled and sent to the line with 2.2 seconds left. She made both of her free throws and helped secure the 75-70 win for her team.

The Good: Hailey Van Lith is a star. She finished the night with 25 points, 4 rebounds, 2 assists, and 2 steals. Olivia Cochran also got herself a birthday double-double with 13 points and 13 rebounds.

The Ugly: The broadcast. If you watched the game, you know exactly what I’m talking about. They need to do better down there in Nashville.

Next up: Louisville heads to the Bahamas for The Battle 4 Atlantis. They’ll start things off against Gonzaga Saturday night at 7:30p.m. EST. This game will be streamed on Flohoops and can also be heard on 93.9 The Ville.