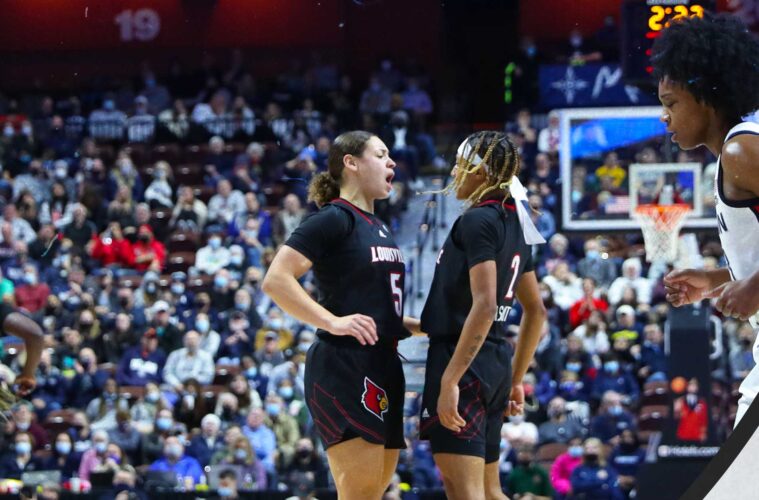 No. 6 Louisville Takes Down No. 7 UConn At The Mohegan Sun

Louisville ended a 30-game winning streak at the Mohegan Sun for UConn today, coming away with a 69-64 win. This marks the first time a Jeff Walz Louisville team has beaten UConn in Connecticut.

The Huskies were on a roll in the first half outscoring No. 6 Louisville in the paint 16-6 and capitalizing on 9 Cardinal turnovers. Louisville was struggling to find their footing on both ends of the court after Emily Engstler picked up two fouls in the first three minutes of the game. In fact, Louisville never led in the first half and saw their largest deficit of the season. The Cards saw the momentum shift with two back-to-back three pointers from Ahlana Smith and Kianna Smith just before the halftime break and cut the UConn lead to just three points.

Louisville was a different team coming out in the third quarter. Kianna Smith scored 11 points in the third and Emily Engstler made her return coming up with big aggressive plays on defense. Shots started falling for the Cards in the second half as Hailey Van Lith dropped 10 points and Engstler scored all 9 of her points in the last ten minutes. Despite giving No. 7 UConn way too many second chance points and being outscored in the paint by a large margin (38-12), Louisville was able to hold off a strong defensive team for their 10th straight win.

Hailey Van Lith and Kianna Smith led the team in scoring with 16 points each. Emily Engstler led in rebounding with 6 and Ahlana Smith led in steals with 2 on the night. As a team, the Cards were shooting 43.1% and found a strong 21 fastbreak points.

Louisville will take a break for the holiday before hosting Boston College at the Yum! Center on December 30th. The game will tip-off at 7:00est. and be aired on ACCNx.