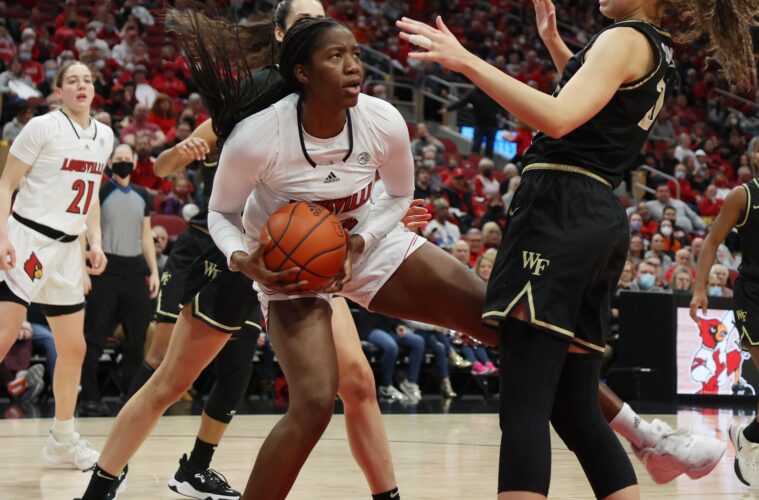 No. 3 Louisville Back In The Win Column After 72-60 Victory Over Wake Forest

Coming off an unusual meltdown and loss at North Carolina State, Louisville found a way to bounce back with an explosive 72-60 win over Wake Forest this afternoon.

The Cards started off with a shaky offense in the first quarter, but that’s nothing we aren’t used to seeing. Going into the second quarter and through most of the third quarter, Louisville found their “boom” and went on a 32-0 run and the defense did their job with Wake Forest missing 20 consecutive shots. The bench really let themselves shine today with 25 points and more notably big plays from Liz Dixon, who finished her day with 12 points and 5 rebounds, and Mykasa Robinson who tallied 7 assists. Emily Engstler finished the day with 15 points and 8 rebounds after getting a technical foul late in the game. It’s no secret that the officiating in women’s basketball is terrible, but the technical foul given to Engstler was beyond questionable.

As a team Louisville was shooting 51% from the field, 53.3% from beyond the arch, and 85.7% from the free throw line and they held onto a 33-point lead toward the end of the third quarter. The Cards were also 12-16 on layups today, which is a slight improvement… or at least feels like one. Hailey Van Lith led the way in scoring with 17 points today while also adding 4 defensive rebounds and 6 assists to her stat line.

The No.3 Cards will host Florida State at the KFC Yum! Center on Thursday night at 8:00p.m. on the ACCN.