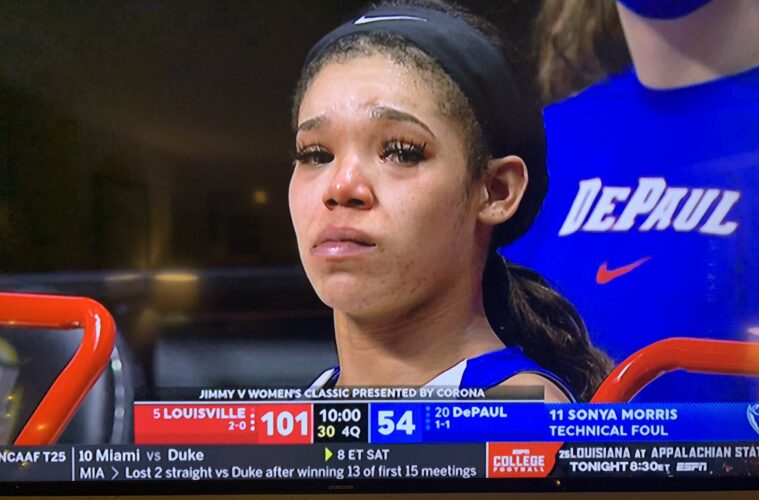 The Cards faced their first true battle of 2020 when they entered the Mohegan Sun Arena to play #20 DePaul and quite frankly, made the Blue Demons look silly. Both teams played fast and aggressive, but that didn’t stop Louisville, with the best backcourt in the country, from another big victory.

Louisville wasted no time and had a very early 11-5 lead in the first period after quick points from Van Lith, Evans, A. Smith, and Cochran. After Ahlana Smith picked up two fast fouls, Kianna Smith made her debut as a Cardinal and tallied her first points with a 3-pointer. She would go on to have 11 points in the first quarter. We saw a lot of aggressive defense on the court with blocks from Kianna Smith, Elizabeth Balogun, and Hailey Van Lith as well as a steal for Mykasa Robinson. Although Louisville had six turnovers, they only gave up four points on those turnovers through 27 possessions.

The Cards would quickly extend their lead early in the second quarter going on a 17-2 run. While the offense stayed hot, the defense stayed hotter. Louisville completely shut down the DePaul offense allowing only 13 points in the second quarter and scoring 11 points off turnovers. Going into halftime, Louisville led the Blue Demons by 24 points, 61-37. This would tie the program record for the most points scored in a half. Kianna Smith, Hailey Van Lith, and Dana Evans had 42 of those 61 points.

Louisville led 101-54 to start the fourth quarter and had 5 players with double digit scoring. With only six made three’s, they proved they can take the court and run the show any way they want to. The Cards broke their single game scoring record, which was previously 115 points, winning this matchup 116-75. I could go on about this team for days. They’re an incredibly talented group that plays exceptionally well together. The fact that they came into this season ranked #5 feels as wrong as someone saying they don’t love a cold Reese’s Cup.

The benefit of tonight was getting to utilize the depth of this roster and getting to see what everyone could do against a top 20 team. 51 of their 116 points came off the bench. Louisville ended their night with 5 players in double digit scoring, including Olivia Cochran who recorded a double-double, 19 points and 10 rebounds. Hailey Van Lith and Kianna Smith led the team in points with 21 each.

The Cards are scheduled to play UT Martin at the KFC Yum! Center on Sunday, December 6th at noon.