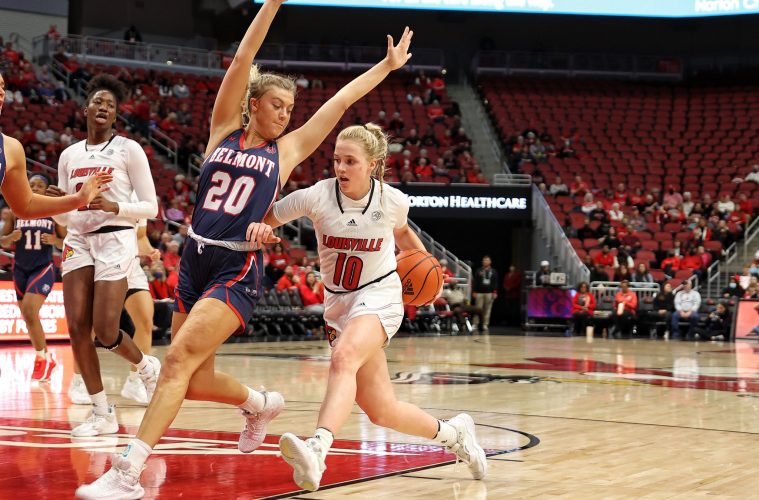 The No. 10 ranked Louisville Cardinals hosted Belmont at the KFC! Yum Center this afternoon and came away with an 80-66 victory, moving their season record to 7-1.

The first half was a story of an unusually sloppy defense who gave up 24 points and struggled to find their way. Now that being said, a mediocre Louisville defense is still a pretty good defense. They had 15 defensive rebounds and 5 steals, led by Hailey Van Lith who had 4 of the 15 defensive rebounds. Kianna Smith was feeling it early and with her first basket of the day would join the 1,000-career point club. She went on to have 9 first half points, joined by Hailey Van Lith and Chelsie Hall. While she was quiet offensively through the first two quarters, Emily Engstler tallied 3 rebounds on the defensive end of things and had 2 blocks. One thing was for sure, Belmont was not afraid to come into the Yum! Center and go head-to-head with the Cardinals, cutting the Louisville lead to just 2 points in the second quarter before the Cards went on an 11-0 run to have a 39-24 halftime lead.

Louisville had a good offensive showing in the second half with 10 assists and 22 points in the paint. They also found 6 second half points off 8 Belmont turnovers and were shooting 65.4% from the field during the third and fourth quarters. Hailey Van Lith led the team in scoring after finishing her day with 16 points and 5 rebounds. Kianna Smith also had a great day with a total of 14 points, 4 rebounds, and 5 assists. Olivia Cochran has really seemed to find her identity behind her on court aggression. She came away with 10 points and 7 rebounds. Overall, the team had a 56.7% scoring percentage. I’ve harped on this several times before and I still standby it, they must do something about the turnovers. Was I proven wrong once before? Yes. But 15 turnovers can cause major issues when we step into ACC play in a few short weeks.

After the game Kianna Smith said scoring 1,000 points is rewarding. She stated she’s grateful to be in the program here. Don’t worry Kianna, we are too. She went on to say the team’s defensive effort was not great. They simply have to do better.

On the defense, Hailey Van Lith said they gave up three-pointers all night long. They just got lucky that Belmont was missing shots at certain points.

When asked about the upcoming Kentucky game, Kianna Smith said they know how big that matchup will be. She said they’ll be ready with a week to prepare. Hailey Van Lith said they need to improve their energy before their game against Kentucky next week. She said everyone wants to beat them and they need to pick up energy for every game.

On the 5 on 5 substitutions, both Hailey and Kianna said it wasn’t planned but they also were not surprised.

When asked about her early season slump, Hailey Van Lith said she was patient today and her team can rely on her more now that she has her flow back.

Coach Walz said he didn’t see much defensively in the fourth quarter. He went on to say they had some terrible breakdowns and stopped doing what they do, and it was just bad. He told his team not to give Belmont the opportunity to shoot three’s. Jeff also said they would get some rest this week and be ready for Kentucky on Sunday.

He also said he’s not surprised to see improvements from Hailey Van Lith because she works so hard. He expects her to continue on this path.

On the rivalry, Coach Walz says they’ll talk about it, but his players know the importance of this game. He went on to say it’s been neat to see the success of both programs and it’ll be a tough ballgame.

Louisville will host No. 20 Kentucky at the KFC Yum! Center on Sunday, November 12th at 1pm est. The game will air on ESPN.